Many hope change comes to immigration 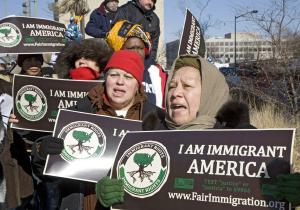 By 8 a.m. it is standing room only at the CASA de Maryland workers’ center in Rockville, Md., where nearly 80 people have gathered since the early morning in search of manual labor jobs in carpentry, construction, moving and painting. A labor organizer is speaking to the group in Spanish, going over rules and offering information on the economy and current events.

She plays an English-language learning tape as workers -- mostly young and middle-aged men -- wait to be matched with employers based on their qualifications. If selected, the skilled laborers hired for plumbing and carpentry work will earn around $15 per hour, while unskilled workers hired for demolition, painting and moving jobs receive about $10 per hour.

But winter is a slow season at the center, according to staff, and the economy isn’t helping the situation. Some will walk away without work and return the next day.

Many in the immigrant community are hoping the policies of the new administration will mark a change for the better -- an improved economy, more jobs and an end to workplace raids. A year ago, said CASA de Maryland spokesman Mario Quiroz, people were talking about going back home, while the general attitude now is “wait and see.”

“We hope that, at least, the government comes out with something that can bring out of the shadows more than 12 million people that are in this situation,” Quiroz said.

Juan Emerson has been waiting at the center since 6:30 a.m., looking for work as a mover or landscaper. Speaking in Spanish with Quiroz translating, the 23-year-old from El Salvador explained his decision to come to the United States six months ago in search of work. He was studying computer engineering in college but his parents were struggling to finance his education as well as his sister’s, so he came here to earn money and help them out. Although there are many opportunities in this country, he’s finding it difficult to secure work without papers.

During his campaign, President Barack Obama vowed to fix the immigration system and make it a top priority, offering a solution that includes securing U.S. borders, “cracking down on employers who hire undocumented workers” and facilitating the transition to citizenship for undocumented immigrants in good standing. But Obama has been silent on the issue since taking office last month.

Quiroz said nearly 70 percent of Hispanic voters supported Obama in the November election, an indication the community sees him as someone who will bring needed reform to the immigration system. And they’re optimistic about his choice of former Arizona Governor Janet Napolitano as Secretary of Homeland Security, parent department of the U.S. Immigration and Customs Enforcement (ICE) agency.

The hope and enthusiasm for the Obama administration was evident Jan. 21, when several hundred people from across the country held a peaceful protest outside U.S. Immigration and Customs Enforcement headquarters in Washington, calling for immigration reform, humane treatment and an end to workplace raids. Alternating between English and Spanish, the protesters chanted “Stop the raids -- yes we can!” and “Si se puede!” to the beat of drums, waving signs that read “I am immigrant America” and unfolding a large U.S. flag that billowed in the wind.

The rally was intended to “cleanse ICE of eight years of repressive politics” on the first day of the new administration, according to a press release issued by organizers, and was one of several demonstrations planned at detention offices and municipal buildings across the country.

A Pew Hispanic Center report released in October estimated there were 11.9 million unauthorized immigrants -- 4 percent of the nation’s population -- living in the United States in March 2008. According to the study, the number of unauthorized immigrants entering the country reached an average high of 800,000 per year from 2000 to 2004, but has been steadily decreasing since then, averaging 500,000 per year from 2005 to 2008.

The report suggests the economic slowdown and stricter enforcement of immigration laws as possible explanations for the drop in the number of illegal immigrants entering the country.

According to Immigration and Customs Enforcement’s 2007 annual report, the agency removed 276,912 illegal immigrants from the United States that year and began implementation of an aggressive enforcement campaign. The Comprehensive Immigration Reform Act of 2007, which would have eased the path to citizenship for illegal immigrants already in the country while strengthening border security, failed in the U.S. Senate amid bipartisan criticism.

That was a year and a half ago.

Now, faced with an ailing economy and rising unemployment rate, it’s unlikely the Obama administration will place “amnesty for millions of people who broke the law” high on its list of priorities, said Ira Mehlman, national media director at the Federation for American Immigration Reform, an anti-illegal immigrant lobby.

“We’ve seen this before and it has, for the most part, backfired on them,” Mehlman said. “The idea that people come here illegally and then make demands is something that’s anathema to most law-abiding citizens.” Raids and a consistent crackdown on employers who hire illegal immigrants have been effective, causing a decline in the population of illegal immigrants in Georgia, Arizona and Missouri, among other states, he said.

“We’d like to see a consistent pattern of enforcement that sends a clear message,” Mehlman said. “When you have rampant disregard of law, it is not beneficial to society.”

Others maintain that legalizing undocumented immigrants will ultimately benefit the economy, as workers are brought “out of the shadows,” pay all their taxes and are more likely to be consumers.

“It’ll create a level playing field for all workers,” eliminating the cash-based “underground economy” that puts U.S. workers at a disadvantage, said Kevin Appleby, director of Migration and Refugee Policy at the U.S. Conference of Catholic Bishops. “What we want to do is make the case that legalizing immigration is a good thing,” Appleby said.

Quiroz, of CASA de Maryland, said many arguments used by anti-immigration groups -- that undocumented immigrants are responsible for a rise in crime and have a negative impact on health-care and education systems -- are based on myths. “The problem is that many of the arguments are based on passion and not reason, not numbers,” Quiroz said. One example is the idea that immigrants don’t make an effort to learn English.

“Everyone knows they have to learn English,” he said, but many immigrants, who work two jobs to make ends meet and spend the remainder of the day caring for their children, don’t have any time or energy left to study. “It’s not that immigrants don’t want to learn -- it’s just complicated, and it takes time and it takes effort.”

Lili Rossi, who teaches a Level 2 English for Speakers of Other Languages course offered by Catholic Charities of the Washington archdiocese at Nativity Church, said her students -- a mix of Latin American and Ethiopian immigrants -- want to improve their English skills, but often other responsibilities take precedence. It’s especially difficult to learn English when you live, work and are surrounded by others who speak your native language.

“Sometimes their life and their work come first,” she said.

Even within a small cross section of the immigrant population, the stories are many and varied, and legal status ranges from undocumented to U.S. citizen. Among students taking a building-maintenance class offered by Catholic Charities at their Washington headquarters, there was a former journalist from Bolivia, a carpenter from Chile, a mechanic from Peru and a cabinetmaker from Ecuador. Some left their countries to provide a better life for those back home and plan to return in a few years, while others came with their families and never looked back. Many entered on tourist visas. One man sought political asylum.

Julio, 22, doesn’t have many options: He can leave his family and return to a place he hasn’t seen since childhood or remain as an undocumented immigrant. He was 14 when he left Peru to join his parents in the United States, entering on a tourist visa. And though his mother, now married to a U.S. citizen, is a legal resident, Julio was older than 18 at the time of the marriage and couldn’t gain legal status.

It’s a complicated situation, he said, declining to give his last name because of his undocumented status.

After attending high school here, he has assimilated into American culture, speaks English with near-native fluency and is now an accounting student at community college. But the only jobs open to him are manual labor, working for employers who don’t ask for documents, pay cash and “turn a blind eye” because it’s cheaper labor.

There isn’t much he can do at this point, he said, aside from marrying a U.S. citizen. He’s holding out hope that the Obama administration will open up more possibilities.