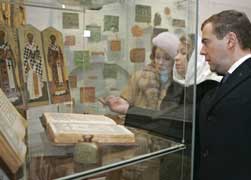 Analysis
President Obama will meet with Russian President Dmitry Medvedev for the first time on April 1, on the eve of the upcoming G-20 meeting. As with previous Russian and American leaders in the nuclear age, the future of life on the planet may rest upon their chemistry and ability to work together.

These two men will have the chance to change the course of global nuclear policy, setting their two countries and all humanity on a far less dangerous path. Both men have called for such change. Both have expressed support for the goal of a world free of nuclear weapons. Their opening dialogue on issues of nuclear disarmament will likely set the tone for their work over the next few years.

Medvedev, in a statement shared at a recent plenary meeting of the Conference on Disarmament in Geneva, emphasized that "Russia is open to dialogue and is prepared for negotiations with the new U.S. administration." His message continued, "I fully share the commitment of the U.S. President Barack H. Obama to the noble goal of saving the world from the nuclear threat and see here a fertile ground for a joint work."

What can we reasonably expect as outcomes in the area of nuclear disarmament from their upcoming meeting? The most important outcome is likely to be a joint statement of commitment to move the world away from the nuclear precipice with the goal of achieving a world without nuclear weapons.

This statement of commitment will be important in publicly recognizing the obligations of the two countries under the Nuclear Non-Proliferation Treaty and in finally putting to an end the dangerous residual dynamics of the Cold War. But more tangible signs of their intentions will also be needed.

The two leaders should pledge their cooperation and common effort in controlling nuclear weapons and loose nuclear materials throughout the world, keeping these out of the hands of terrorists. This is absolutely essential for the future security of both countries and for the rest of the world.

The two men should also agree to end the dangerous Cold War legacy of keeping thousands of their nuclear weapons on hair-trigger alert. Nearly two decades after the end of the Cold War, this practice allows virtually no time for rational decision making and invites potential accidental launches based on faulty information or computer error.

Another matter ripe for agreement is the extension of the 1991 Strategic Arms Reduction Treaty (START I), which is scheduled to expire in December 2009. This is the only active agreement between the two countries that has provisions for accounting and verification, and these provisions will be needed as the two countries move forward in making deeper cuts in their arsenals.

Surely the two men will also have some figures in mind for the next step in moving toward nuclear disarmament. Currently, both sides are committed under the Strategic Offensive Reductions Treaty (SORT) to reduce their deployed strategic warheads to between 2,200 and 1,700 by the end of the year 2012. A serious next step, which could supersede the SORT agreement, would reduce the arsenals on each side to approximately 1,000, including both deployed and reserve weapons. This is still far too many, but it would demonstrate that the two sides are taking seriously their obligations for nuclear disarmament.

Other issues related to nuclear policy that may come on the table include the Comprehensive Test Ban Treaty, a Fissile Material Cutoff Treaty, a ban on new nuclear weapons, reductions in ballistic missiles, controlling the nuclear fuel cycle, and commitments of No First Use. The Russians are also deeply concerned about U.S. missile defense plans in Europe, reaching an agreement to prevent the weaponization of space, and refraining from substituting conventional warheads on intercontinental ballistic missiles from which nuclear warheads have been removed.

Many hopes for the future rest upon Obama and Medvedev working together to achieve the bold vision of ridding the world of the only weapon capable of ending the human presence on our planet. Their vision is aligned. Now the world awaits their action.

(David Krieger is president of the Nuclear Age Peace Foundation (www.wagingpeace.org) and a councilor on the World Future Council.)

The litany of Latin American martyrs