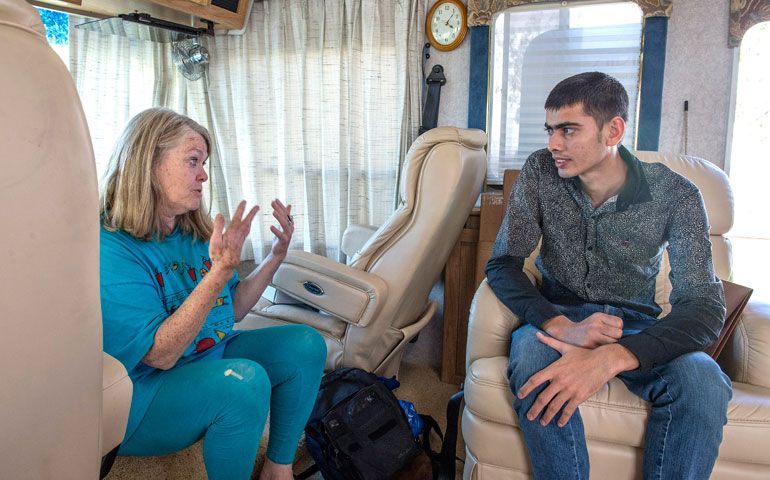 TACOMA, Wash. — Standing outside the Northwest Detention Center here, it's still possible to feel isolated and detached from the rest of the world.

A formidable fence encompassing an otherwise inconspicuous building stretches to either side of a closely monitored gate. Weedy railroad tracks divide barren land beyond in broad swathes. The surrounding region -- polluted tidelands whose claim to fame is a federal Superfund project called "the Tacoma Tar Pits" in reference to toxic sludge that seeped over decades into Commencement Bay -- is relatively devoid of people when compared to the busy interstate and port that flank the city's center.

For just-released detainees though, the landscape can be even harsher and more disorientating. In the same clothing worn upon admittance (no matter the weather) and with only a plastic bag to carry personal items and legal paperwork, those released on bail or for other legal reasons can encounter unforeseen challenges and risks that coincide with the conditions of newfound freedom.

Most detainees are released with nightfall fast approaching, and many struggle to secure basic needs such as food and shelter in the next days or hours. For those who are especially vulnerable -- non-native English speakers, women or young adults, people transferred from other regions who have no family or friends nearby and are unfamiliar with the immediate area -- such tasks can seem insurmountable.

But in July, a 36-foot-long motor home outfitted as a Post-Detention Welcome Center has changed this situation for the better. Described as "a dream come true" by members of Advocates for Immigrants in Detention Northwest, or AID NW, a nonprofit focused on helping detainees access needed resources and support, the welcome center offers a temporary safe haven for released detainees. Parked just steps from the detention center's release gate, the roomy, gleaming RV offers comfortable spaces to relax in and freshen up, as well as telephone access, food and beverages, toiletries, bus cards, area maps, a donated backpack for personal belongings, as well as the assistance of three to five trained volunteers who can help locate housing, confirm transportation, or contact government agencies and help with official forms, such as an application for a work permit.

The idea of a mobile welcome center was first envisioned in late 2005 during a roundtable community meeting comprising "people working on issues around the detention center and its impact [after its relocation] from downtown Seattle to the Tidelands of Tacoma, including delivery of safe release services," according to Peggy Herman, founding board member of AID NW. Herman is lead coordinator of the welcome center project and trains all welcome center volunteers.

At an opening celebration and blessing of the welcome center on July 15, dozens of longtime supporters of the mobile welcome station gathered to pray, share information related to fundraising and other details, and tour the vehicle.

Former detainees who have been helped by volunteers with AID NW also spoke about their experiences as well as their hope for the future. One woman named Lolita, who had been at the detention center one year ago, sang the hymn "Pescador de Hombres" in Spanish (known in English as "Lord, You Have Come") and told volunteers that "without you ... perhaps we would have been returned to our creator."

Seattle Auxiliary Bishop Eusebio Elizondo offered a blessing and some additional words of encouragement, asking the Holy Spirit "for wisdom to better serve our brothers and sisters, using our intelligence to challenge our government, to discover new laws, to offer a better opportunity to all those who come to our borders."

Open from 3-6 p.m. during the week, the center also welcomes family members and friends of detainees who must sometimes travel far distances and wait for long periods of time before loved ones are released.

The purchase of the trailer, as well as related licensing, insuring and titling costs, has created a $25,000 debt for the organization that it anticipates repaying through a crowdfunding site and other grants and donations.

With support from Lutheran Immigration Refugee Service, AID NW also operates two hospitality homes in Tacoma, one for men and one for women who are in need of temporary housing until necessary documents to work legally and live independently can be obtained. Though funding dedicated to these units ends this year, AID NW has applied for transitional funding and remains "focused on finding new sources of revenue to keep the hospitality homes open," according to Herman.

Not bilingual herself, Herman has learned in her role as a deportation defense attorney that "heart and compassion is what matters." She describes the welcome center as a place where a warm welcome or a much-needed backpack impart "an amount of dignity that is so appreciated." Though she admits that "deportation cases are hard and painful," she finds much joy in working alongside advocates to reach out and stand alongside immigrants in need.

A 2012 article published about the Northwest Detention Center by InvestigateWest found that "nearly 83,000 detainees -- overwhelmingly undocumented immigrants with minor or no criminal records -- have passed through the Tacoma detention center's doors, with nearly 52,000 of them sent back to their countries of origin." It's estimated that more than 400,000 undocumented immigrants are booked into government-appointed detention centers in the United States each year.

Parked in the shadow of one of the four largest federal U.S. Immigration and Customs Enforcement detention centers in the nation, the welcome center is also a direct response to the detention facility's own expansion -- from an originally slated 500 beds when the detention center was first opened in Seattle to the current total of nearly 1,600 beds.

Increasingly aware of the growing number of Catholics from around the world held at the detention center for a month or longer, the Seattle archdiocese recently established one-time funding for a chaplaincy position dedicated to detainees. Esmeralda Saltos, pastoral programming coordinator for the Catholic program at the detention center who is also a parishioner at Holy Disciples Parish in Puyallup, began her work with detainees as a volunteer and has been creative in recruiting others to help as well as soliciting resources such as Catholic Bibles, prayer cards, and rosaries from parishes to give to detainees.

"I feel that we as Catholics should be more involved in helping ones in need and this ministry is in great need of volunteers," she said. "It is so hard for people to be separated from their families and for us to bring Jesus to them, the word of God ... makes them so happy."

Deacon George Mounce III of St. Frances Cabrini Parish in Lakewood, a suburb of Tacoma, also ministers to men and women at the detention center once a month along with 16 other Catholic volunteers from Washington State and Oregon. Describing the opening of the welcome center as a "simple act of Christian charity ... that allows the recently released to get organized while giving those who support them a visible opportunity to serve," he also called it "a tribute to the community in general, and individuals in particular, who pooled resources in response to a problem that has been identified for some time."

Referring to those inside the detention center as "a forgotten community," Mounce explained that "this is a justice issue that we can do something about in this way" and added that "as a volunteer to those inside, I'm pleased that those who are able to come out will receive immediate help to begin their transition, not just left on the street to fend for themselves."

Antonio, once a resident of a nearby juvenile detention facility, avoided being detained at the Northwest Detention Center when he aged out of Office of Refugee Resettlement custody on his 18th birthday. Based on applications for lawful status that he had filed and because AID NW agreed to ensure a safe and age-appropriate housing environment for him, he is grateful for the help he received from volunteers before and after his release.

Currently living with a host family and planning to attend a Christian academy in the greater Seattle area this fall, Antonio is glad that others currently detained will have better access to support and resources.

"When we get out, we need a home where we can stay," he said. "We can't stay on the streets. Thank God, I am right here right now. It's a blessing of God, to not be afraid anymore, and to not worry. I am very thankful, and I can speak for others who are thankful, too."

Bangladesh counts the human cost of the garment industry

The sad, suffering return of 'Godspell'

Brutal attacks against clergy in Nigeria cause fear among Catholics