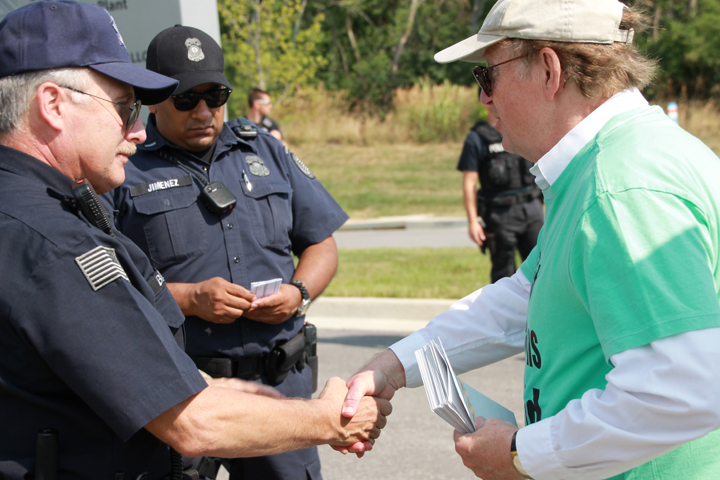 Twenty-three people, including the new U.S. provincial supervisor of the Missionary Oblates of Mary Immaculate, were arrested Saturday after crossing the property line of a new nuclear weapons complex.

The group was participating in a PeaceWorks protest at the National Security Campus, also known as the Kansas City Plant, a five-building facility where 85 percent of the non-nuclear parts for U.S. nuclear weapons will be made or procured.

Line-crossers were arrested, fingerprinted, photographed and held at the Jackson County Police Department, according to a PeaceWorks Kansas City press release. All have been released.

Among those arrested were veteran nuclear protester Fr. Carl Kabat, 79, of the Missionary Oblates of Mary Immaculate and his new provincial superior, Fr. Bill Antone.

Kabat is one of the Plowshares Eight, a group famous for a 1980 protest in Pennsylvania in which they tried to disable missile nose cones with a jackhammer. Kabat has spent more than 17 years in jail and said his activism nearly forced him out of his order.

Antone said it was important for him to attend the protest partly because of his personal opposition to nuclear weapons but mostly to support Kabat.

"I'm here to be in solidarity with Carl and what he's done and, in [crossing the line], to show that there is an affirmation and a support and understanding that what he's done is valid," Antone said.

Saying he has "heroic persistence," Antone said Kabat has been "a real witness to our faith [and is] something that we as oblates can be proud of."

While Antone wanted the protest, not his presence, to "be the news," his attendance did not go unnoticed by those who commuted to the protest from other states.

"When I heard Carl invited his provincial, I wanted to join into that," said Jesuit Fr. Bill Bichsel of Tacoma, Wash. "That whole sense of solidarity, I like that. Things become more alive when you're connected to the people that you're doing the action with. It makes it more vibrant and alive -- a spirit that moves."

Bichsel was one of two 85-year-olds arrested Saturday. When asked how many times he has been arrested at similar demonstrations, Bichsel laughed and said more than a hundred.

"I think that gatherings such as this are much more powerful than a nuclear weapon," Bichsel said. "Relationships are so important in establishing our long-term struggle, our long term fight."

The Kansas City facility is one of two newly constructed nuclear weapons plants in the United States and, according to Bichsel, is a linchpin in nuclear production.

"The plant here in Kansas City represents the United States' thrust and direction into endless war, keeping us in war, keeping us in a wartime economy," Bichsel said. "Of course we're making enemies -- we're threatening everyone with guns to their head."

Kabat said he feels it is his duty as an American citizen to protest the creation of nuclear weapons and take responsibility for the ownership of the warheads.

"They're our bombs. They don't belong to Barack Obama or Jimmy Carter or whoever -- they're ours. They belong to the U.S., and it's our country. It's up to us to do whatever needs to be done," Kabat said.

While Kabat finds himself among a 53 percent majority of Americans who oppose the amount of funding the United States allocates to nuclear weapons, he is in a minority of those willing to go to jail in protest.

Kabat said most people who oppose nuclear weapons still don't speak out about the issue, which he attributes to a culture of obedience.

A version of this story appeared in the Aug 2-15, 2013 print issue under the headline: 'Crossing the line': 23 protesters arrested at new plant for nuclear weapons parts.