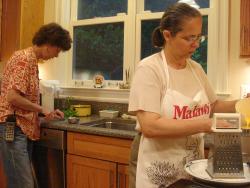 WASHINGTON -- Last July, Cynthia Nordone and Helen Schietinger took a number at the District of Columbia Department of Health, waited in line and walked away with a document that bound them to one another as domestic partners. But there were no gifts or greeting cards to mark the occasion -- just the seal of a government institution and a few legal benefits.

“It’s very statistical,” said Nordone, as she and Schietinger prepared dinner at home on a recent evening. “It’s not any kind of communal recognition of the commitment that we’re making to the one and only.”

What the couple are looking for -- beyond the meaning and implications of terms like domestic partnership, civil union and civil marriage -- is a sense that their relationship is real to the greater community, outside the walls of the Northwest D.C. home they have shared for nearly 10 years.

“What I think is important is the public witness to the relationship,” said Nordone, 49, a lawyer and lifetime Catholic. “It happens every time I say, ‘This is my partner, Helen’ -- I’m giving witness to what’s important to me.”

Schietinger, 61, a social justice activist and retired nurse, prepares a salad in the kitchen as Nordone goes back and forth between the stove and the grill outside. They talk about the similarity in their values, their ease and comfort with each other and the ability to share the other person’s interests and learn from one another.

“This is, sort of, my bedrock -- this is where I get my energy for the day,” Nordone said. “And where I come home and lick my wounds when it’s been a rough day,” she added with a laugh.

The women spend their free time sailing, hiking and tending to the lush yard behind their home. They both take care of Schietinger’s 90-year-old father and three cats with various ailments, and regularly mentor a neighborhood teenager. It’s a “generative” relationship, Nordone said, in that it enriches the life of others.

Legally, the couple are bound by contracts established independently of the domestic partnership, giving one another power of attorney in the event of a medical emergency or death. In addition, the partnership confers certain health coverage benefits, mutual hospital visitation rights and the right to make decisions regarding a deceased partner’s remains.

But even as the debate on same-sex marriage gains momentum around them -- following the District of Columbia Council’s May 5 decision to recognize unions performed in other states -- the couple remain ambivalent on the issue. It isn’t that the legal benefits aren’t important, they explain. And they are quick to point out the overarching significance of the issue. It’s just that being married to one another in the legal sense would not be a priority right now, they say, even if it were an option in the district.

When and if this will happen is unclear. For now, the council’s 12-1 ruling has drawn criticism from the district’s African-American religious leaders, who last month held a rally protesting the decision. The Washington archdiocese has issued statements expressing concern over the council’s actions, and applauding the District of Columbia Defense of Marriage Act introduced in Congress May 21, to define marriage as a union between a man and a woman.

But there is growing support of the issue in the Catholic community, said Francis DeBernardo, executive director of New Ways Ministry, a Maryland education and outreach ministry that acts as a “bridge” leading back to the church. He said there is a “very strong current” of support for gays and lesbians among Catholic people, who more and more believe the right to marry is a social justice issue.

“The only strong opposition comes from the hierarchy,” which looks at the issue in terms of sexuality rather than equal rights, he said. “To protect people’s rights is a very Catholic thing to do. In protecting people’s rights and in supporting same-sex couples, we’re really working to stabilize society and the common good.”

For many gay and lesbian Catholics who grew up within the church, coming out has been a spiritual journey that led many to seek their own relationships with God in order to understand their sexual orientation. They have something to offer to the church, DeBernardo said, and that is the “ability to speak the truth and live courageously.”

DeBernardo said New Ways has not joined the debate in Washington because it did not appear that there was strong Catholic opposition to the initiative, and the statement from the Washington archdiocese received little attention from the media.

“The strong opposition came from the African-American Protestant congregations in the district,” he said. “I don’t think the archdiocese, either by chance or design, had much of a role in this debate.”

But Communications Director Susan Gibbs said the Washington archdiocese has always been very clear in its opposition to same-sex marriage.

“We’ve been present, but again, we have a council that shut us down,” she said, by voting on the initiative through an amendment process that did not give residents an opportunity to voice their opinions.

Gibbs said people often misunderstand the meaning of marriage, as it is described in Catholic church teachings: They believe it relates to “how people feel about each other” rather than “ the complementarity of male and female,” who have the unique ability to bring children into the world. A union between a man and a woman protects the rights of children to have a mother and a father, who both contribute a unique perspective and create a stable foundation for society, she added.

The archdiocese is now looking at various legislative and educational approaches to the issue, and will focus on reaching out to parishes on the meaning of marriage.

Meanwhile, same-sex marriage supporters are mounting a campaign of their own.

“We are disappointed and outraged, and think that the court just basically failed to uphold the Constitution,” said Andrea Shorter, coalition coordinator for Equality California, speaking on the day following the Proposition 8 verdict. As part of “Win Marriage Back: Make it Real!” the organization plans to, in the next 100 days, recruit 100,000 volunteers who will take the time to discuss the issue with friends and acquaintances, as well as identify clergy of all faiths who will reach out to their congregations.

In May 2008 California had become the second state to issue marriage licenses to same-sex couples, after Massachusetts passed the legislation allowing same-sex marriage in 2004, according to the National Conference of State Legislatures. Connecticut legalized the unions in October 2008, and Iowa, Vermont, Maine and New Hampshire followed suit earlier this year. Five states currently allow civil unions, and a few others, including the District of Columbia, allow domestic partnerships that grant some state-level spousal rights to couples.

Maryland residents David Kolesar and his partner Patrick Wojahn, former plaintiffs in a marriage equality lawsuit that was ultimately dismissed in 2007, were married in a religious commitment ceremony performed at Dignity Washington, a community of gay, lesbian, bisexual and transgendered Catholics. But the civil marriage could be years away.

The partners said they are not just looking for the stronger legal protection and more comprehensive benefits that marriage would afford them, but also for a broader recognition of their commitment.

Kolesar, who grew up in the church and attended Catholic institutions all his life, said there is an inherent contradiction in Catholic doctrine, which “allows you to come to your own conclusions” and make your own decisions based on teachings.

“If you go by the doctrine, gay people are forced into a life of celibacy by the church, but the church teaches that celibacy comes from within,” said the 31-year-old radio engineer. “I didn’t have a choice to be gay, just as people don’t choose to be straight.”

In 2004 the partners were chosen as plaintiffs in the Equality Maryland and ACLU lawsuit because of the possibility that complications could arise as a result of a severe medical condition Kolesar suffered from years ago.

“I’d like to think now that, well, my family would defer to my partner” in the event of a medical emergency, Kolesar said. But in many same-sex relationships, it doesn’t work out that way.

Though the shift has been gradual, statistics and surveys indicate that younger people, in particular, are beginning to see that a “lack of marriage equality is discrimination,” said Wojahn, 33, a College Park, Md., City Council member and a civil rights lawyer.

“I think the tide of progress is definitely in our direction,” he added, but “as with any tidal change, it takes some time.”

Are we all in this together? Now is not the time to give up on building solidarity