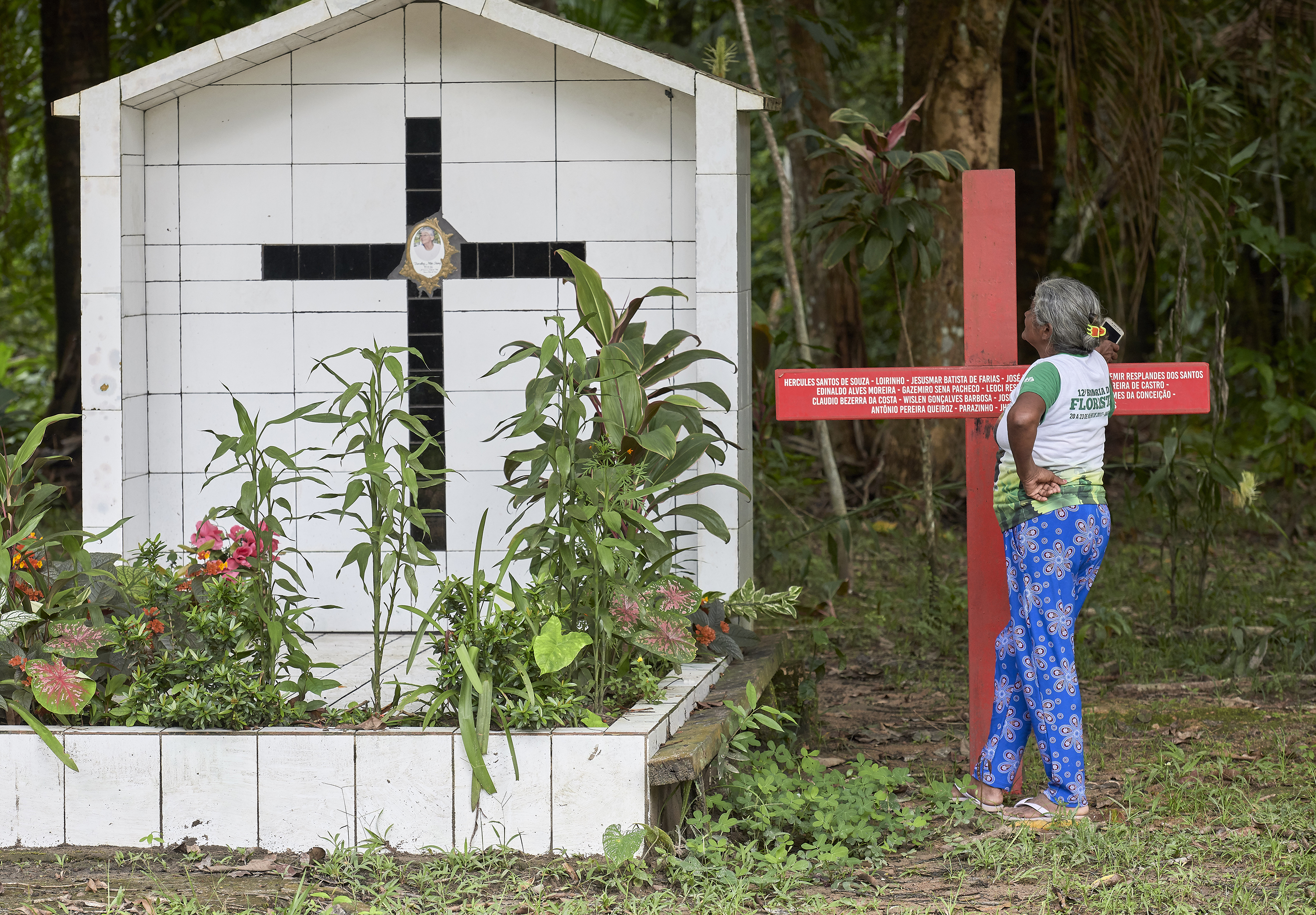 Antonia Silva Lima, a farmer in the Brazilian Amazon, prays at the grave of U.S.-born Sister Dorothy Stang in Anapu, Brazil. Sister Stang was assassinated in 2005. The red cross beside her grave bears the names of 16 local rights activists who have been murdered since her killing. Church activists say the killings continue, and they're about to erect a second red cross with even more names. (CNS Photo/Paul Jeffrey)

A phone call from an American nun in Brazil 14 years ago left Darnell Stang in a state of shock and grief. When her husband Tom came home, she was sobbing uncontrollably.

"What happened?  he asked. As the tears flowed, she cried out, "Tom, they just killed Dorothy!"

Sister of Notre Dame de Namur Dorothy Stang was brutally assassinated on Feb. 12, 2005, by two henchmen sent by wealthy landowners to put an end to her ministry on behalf of poor farmers in the state of Para, Brazil.

Fast forward 14 years to the Vatican's Synod for the Pan Amazon Region, Oct. 6-27.  Tom Stang, 82, felt he needed to be there for his sister. He booked a flight from Los Angeles to Rome and stayed for a week at a $70 Airbnb, a stone's throw from the Vatican.

"I wanted to make Dorothy present at the synod in a family way," he said.

"What they discussed in Rome is what she lived and died for. Had she lived, she would have been here."

While the bishops conferred inside the Vatican, Stang attended daily prayer services at the Carmelite church of Santa Maria in Traspontina with poor farmers, the indigenous and church activists from Brazil.

The response from the Brazilians, he said, was overwhelming. "When I told them Dorothy was my sister, they went bananas," he said.  The delegates, some tearful, embraced him. He was asked to read from the scriptures, and he sang his sister's favor civil rights song, "This Little Light of Mine."

Read this next: Q & A with Tom Stang, brother of Sr. Dorothy Stang

Even 14 years later the ranchers continue to discredit Stang and other environmental activists. "A police chief in Anapu and a woman engaged to a wealthy rancher both wrote books recently condemning Dorothy's work," said Sister of Notre Dame de Namur Rebeca Spires, from her home in Belen, Brazil. "At this point she is still considered a threat to them."

Stang's supervisor in Brazil was Bishop Erwin Kräutler, an Austrian-born member of the Precious Blood Missionary congregation. Kräutler, 80, served the Diocese of Xingu in the state of Pará for almost five decades. He is known for his strong defense of Brazil's indigenous population.

Kräutler was badly injured in a 1987 assassination attempt for his defense of indigenous and workers' rights. A priest travelling with him was killed.

"Dorothy was a very decided woman who made strong decisions," Kräutler said in a telephone interview from his home in Altamira, in the state of Para.

"I loved her. She understood that a missionary has to walk with the people. They have no voice. She gave her life to defend their rights. Hers was an evangelical life." 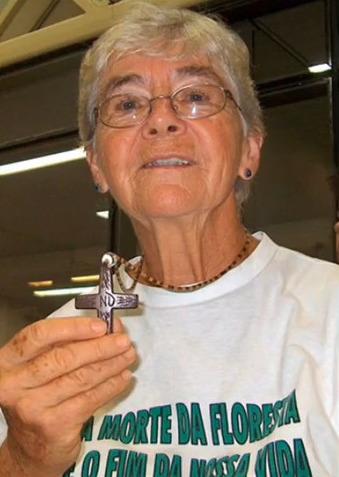 Sister Dorothy Stang, in an undated photo, wears a T-shirt that, translated into English, reads: "The death of the forest is the end of our lives."

Dorothy Mae Stang was born in 1931 in Dayton, Ohio, the fourth of nine children, into a devout Catholic family who prayed the rosary every night. When they lost their home during the Depression, they moved into an abandoned farm house where they grew their own vegetables to make ends meet.

At 17, Stang joined the Sisters of Notre Dame de Namur in 1948 and taught elementary school in Illinois and Arizona. In 1966 she began her missionary work in Brazil. Because of her criticisms of illegal logging and her dogged defense of poor farmers, her co-workers called her "the steel flower."

Brazil's government passed land reform laws in 1972 that lured the urban poor to settle the Amazon, offering them 200 acres of land and seed money for tools. But the land titles were ambiguous and often rejected by corrupt judges, loggers and ranchers.

"The people called Dorothy the 'angel of the Amazon,' " said Sister of Notre Dame de Namur Joan Krimm, during a telephone interview from the Sisters' motherhouse in Cincinnati. Krimm, 89, worked with Stang in Brazil.  The ranchers, however, called Stang a devil and a foreign spy, putting a $17,500 price on her head.

Kräutler, along with Cardinal Cláudio Hummes, emeritus archbishop of Sao Paulo, has strongly advocated on behalf of Brazilian workers and the indigenous. But they also promote the ordination of married men in the Amazon. Currently, there is only one priest for every 5,000 Catholics in the Xingu diocese. The synod approved the married priesthood measure, despite heavy opposition from some bishops.

"The problem for me was always the Eucharist, not celibacy," Kräutler said.  "Thousands of communities do not have the Eucharist. We need another kind of an access to the priesthood."

Kräutler also promotes the incorporation of native rituals and artifacts into the Catholic liturgy. Some Catholic conservatives vigorously oppose this, calling it paganism and heresy.

During the synod, a man stole two pregnant wooden figures of "Our lady of the Amazon" from the Santa Maria in Traspontina church and threw them into the Tiber River.

Police later recovered them. But two Catholic Cardinals, Raymond Burke of the U.S. and Gerhard Müller of Germany, defended the vandalism, denouncing the statues as pagan idols.

Kräutler played a significant role in the writing of "Laudato Si', on Care for Our Common Home," Pope Francis' encyclical letter on the environment.  Calling for "integral ecology," the letter decries the harmful effects of mining, deforestation, logging and runaway development on the human population. 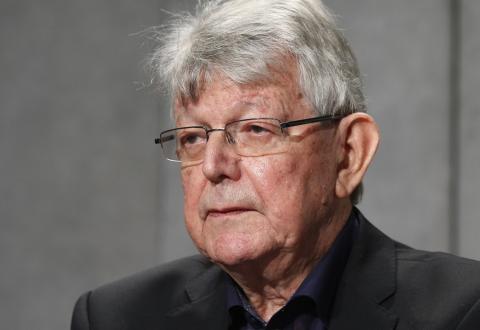 Retired Bishop Erwin Kräutler of Xingu, Brazil, attends a press briefing following a session of the Synod of Bishops for the Amazon at the Vatican Oct. 9, 2019. (CNS photo/Paul Haring)

"This [sustainable agriculture] was Dorothy's great contribution to the Amazon," said Felicio Pontes, a Brazilian lawyer who worked closely with her in documenting the rights of poor farmers, in a telephone interview.

"Dorothy started cocoa production with a group of small farmers near Anapu, using seeds native to the region," said Pontes. "They grew quickly and produced a bumper crop in three years."

It was, he said, a great example of integral ecology.  "These people had nothing, but in a few short years they had money to buy cars and improve their lives. It was a small project, but the landowners and ranchers considered it a serious threat to them."

David Stang, Tom's twin brother, attended all 10 trials of those accused in the Stang murder. In spite of heavy odds, he said, the trials were fair. "Ordinarily, all it would take was a phone call or a bribe from a wealthy rancher to influence a trial.

"Not this time," said Stang. "Just before her death, Dorothy received a major award from the Brazilian Bar Association. When you have the country's elite of European descent on your side, you are fortunate. Everyone loved Dorothy."

Still, the courtroom was tense and stacked with supporters of wealthy rancher Regivaldo Galvão when he arrived in court in 2010. He claimed that a government official gave him a title to the land occupied by Stang and the poor farmers.

After a long silence, a nervous official told the judge he gave no such title to the rancher.

"The jury voted 8-2 to condemn Galvão.  He was sentenced to 30 years in jail. His appeal was turned down by Brazil's Supreme Court.

Bishop Erwin Kräutler told David Stang he first met Dorothy when she knocked on his door one night at 10 p.m. He asked her why she was there.

"I want you to tell me where are the poorest of the poor in your prelature, Dom Kräutler" she said. "I would like to work with them."

"I was astounded," said Kräutler. "The other nuns went through bureaucratic procedures and documents. Not her. There was no way I was going to turn her down. 'I approve,' I told her."