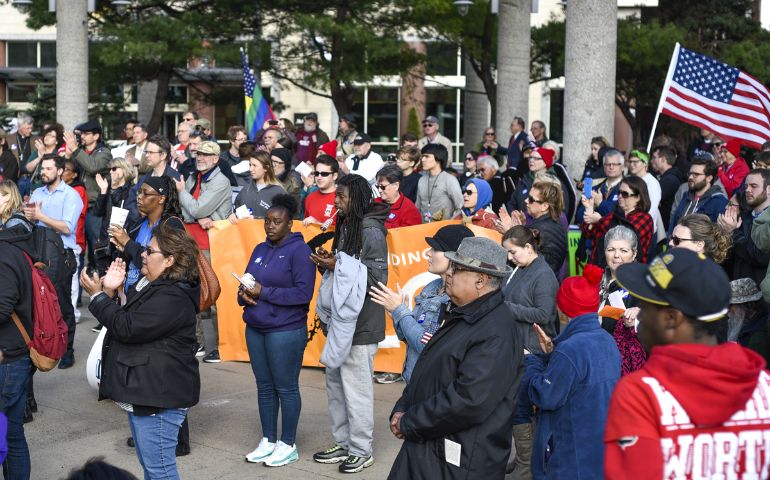 The group rallied at Barney Allis Plaza in Kansas City's downtown hotel and convention center, and marched 6.5 blocks to City Hall, where the Mayor Sly James met them.

The "United We Stand" event coincided with International Workers' Day and was organized by Stand Up KC, a consortium whose members represent 48,000 fast-food and retail workers in the Kansas City area. Stand Up KC is fighting to improve workers' rights, including raising the minimum wage to $15 an hour and guaranteeing quality health care.

Among its members is Melissa Washington-Douds, who has been working in the fast-food industry for 15 years. She's currently making $8.50 an hour at a Burger King in Kansas City, Missouri. She joined the rally as soon as she got off work May 1.

Washington-Douds' struggle to make ends meet is typical of the struggle of all low-income workers, she told NCR.

Her husband can't work because health issues make him dependent on a defibrillator, yet he doesn't qualify for disability payments. Despite working full time and receiving food stamps, Washington-Douds' income isn't enough to pay the bills.

"We barely make it with my wages and food stamps, and it's really difficult because I can't afford my husband's medicine," Washington-Douds said. "We still have to go to food pantries throughout the month."

Several local leaders spoke at the May 1 rally, including the Rev. Donna Simon of St. Mark Hope and Peace Lutheran Church, affiliated with the Evangelical Lutheran Church in America. Simon believes the country is moving in the opposite direction from where it should.

"I think the first word Jesus would be saying to everything going on is 'Woe,' " Simon said. "Woe to you owners who exploit the people who work for you. Woe to you who feel this kind of a system is OK. Woe to you in the legislature who make it possible for workers to be exploited and who roll back things like union dues and all of the protections for workers."

"It's absolutely contradictory to the Gospel," she said, referring to Luke 10 and Matthew 25.

Five years ago, St. Mark served as a temporary home for the Occupy Kansas City group that evolved into the current Stand Up KC organization. Simon had already been serving as the church's pastor for a year then.

"We have this very odd phrase in this country called the 'working poor,' and it's a total oxymoron. How can people work and also be poor? We ought to have a standard in our country where everyone who's working is making enough of a wage so they can't be considered poor," Simon said.

"As religious leaders, we all know what the Scriptures say, what our traditions teach about how we treat each other and how we treat the poor, and Pope Francis is a great leader for us all right now in talking so much about the poor."

Jessica Ayala, a local civil rights activist, also spoke at the rally on behalf of Hispanic and immigrant communities who are severely impacted by the current treatment of low-wage workers in the United States.

"Our immigrant families are also hard-working people who pay taxes, and they serve our entire city, from our farmers to our fast-food workers to our small businesses," she said. "It's important to stand together in solidarity on such a day like May Day."

Ayala and her family immigrated to Kansas City when she was a child. Today, she is a member of various local social rights organizations dedicated to serving Hispanics and immigrants, including Advocates for Immigrant Rights and Reconciliation and Cosecha KC, which launched two weeks ago and already has 25 members.

Ayala compared the United States to an orchestra: "There are so many beautiful instruments that when we come together, we make incredible music. We can't single out one instrument out of an entire gorgeous orchestra. I feel like our new [Trump] administration wants to just represent one particular instrument, and that isn't fair because there are so many incredible voices, incredible stories that add to a fabric of who we are as a nation."

The event concluded with attendees marching back to Barney Allis Plaza.

Washington-Douds said she will continue fighting for her rights as a fast-food worker with Stand Up KC until all workers can live comfortably and be able to fulfill their constitutional rights, including the right to worship.

"I couldn't go to Christmas or Easter Mass because I had to work," said Washington-Douds, who was raised Catholic. "I can't afford to take any time off, but I wish I could. I keep praying every day for this world to change. But with Stand Up KC, I feel empowered to fight for what my husband and I need. We're going to do whatever it takes."

Justice | Stand Up KC rallies for workers on May Day