Trapped in a cycle of debt 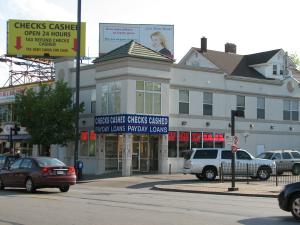 The loan cycle can be triggered by a sudden expense, like an emergency visit to the doctor, a car repair or an electric bill that must be paid before power is disconnected. Once at the lender’s office, the cash-strapped borrower tacks on a little more debt to cover gas and groceries, and leaves behind a signed check postdated for the next payday.

But other expenses always come up, said Bobbie Lison, manager of the budget counseling program at Catholic Charities in Green Bay, Wis., so instead of paying off the loan, many borrowers end up rolling it over as the interest continues to accrue.

“They just get into the cycle of not being able to pay the premium and they’re just paying the interest,” Lison said. “Before you know it, they’re paying multiple payday loans.”

Some payday loan customers who end up in Lison’s office are dealing with as many as eight loans at one time, for amounts that range from $175 to $1,500. The interest, calculated on a yearly rate, averages between 400 and 800 percent.

“They can really be devastating,” Lison said. To get clients back on track, she starts by teaching them how to budget their earnings to cover monthly expenses. Debt management plans are often the answer, but sometimes clients owe so much that bankruptcy is the only option.

These days, she is busier than ever.

“We’ve had a 40 percent increase in people coming to us for the last year,” and a 38 percent increase in bankruptcies, Lison said. And with a chunk of the population laid off or working fewer hours because of employer-imposed restrictions, she expects the situation to worsen as people become more desperate.

Wisconsin is one of 34 states that authorize the short-term, high-interest loans, said Jean Ann Fox, director of financial services with the Consumer Federation of America, but it is the only state where there is no regulation at all on the annual percentage rate charged by licensed lenders. Twenty-nine of these states have set rate caps on interest, and six have not. Payday loans are prohibited in 15 states and the District of Columbia.

Fox said many lenders target customers in low-income communities, making loans that trap people in a cycle of debt. In order to obtain a payday loan, customers only need to have a source of income -- whether it’s from an employer or Social Security benefits -- a bank account and a form of identification.

“If you’re making loans to consumers without determining their ability to repay,” Fox said, “it stands to cause trouble.” Because many payday loan customers are on Social Security, Supplemental Security Income (assistance for elderly and disabled people with no income) and other forms of welfare, “they can’t afford to pay it all at one time so they just pay to renew it.”

A big part of the problem is that people simply don’t earn enough money to cover all their expenses, Fox said, adding that taking out a short-term loan can be “very tempting” for people who struggle to make ends meet and live paycheck to paycheck. And it’s also easier for people to do than, for instance, calling their landlord to let them know rent will be late. Or setting aside $500 for emergencies.

“This just puts off dealing with reality,” she said.

Fox said the Consumer Federation of America opposes the Payday Loan Reform Act of 2009 introduced by Rep. Luis Gutierrez (D-Ill.), one of several consumer credit bills pending in Congress. The bill proposes an interest rate cap of 15 cents per borrowed dollar, which amounts to an annual percentage rate of 391 percent.

Reiterating comments made in her April 2 testimony before the Subcommittee on Financial Institutions and Consumer Credit, Fox said provisions offered in the bill, including repayment plans and a ban on rollover loans, have already proven ineffective in states where they have been attempted.

“It is so easy to get around any restrictions,” she said, “so that quote-unquote protection [of the bill] is toothless.” And the repayment plan provision is “just one of those PR gestures -- it looks good but it doesn’t do anything.”

The organization, joined by a number of other consumer advocacy groups, offers a two-part alternative. In her testimony, Fox urged subcommittee members to back an alternative measure, the Protecting Consumers from Unreasonable Credit Rates Act of 2009, which would establish a national usury rate cap of 36 percent. In addition, Fox said, a provision extending to the general public loan protections currently offered to members of the military under the Military Lending Act should be included in whatever Congress considers.

Lyndsey Medsker, spokeswoman for the Community Financial Services Association of America, said the usury rate cap bill “is basically a ban on the industry.” Medsker said people see payday loans as a viable alternative to paying higher fees for bounced checks and late credit card payments. The market emerged in the 1990s, due in large part to the fact that banks and credit unions stopped offering small, short-term loans.

The payday loan industry is often misrepresented by critics, who calculate the annual interest rate based on interest paid on a two-week loan, Medsker said, ending up with triple-digit APR figures.

“People are used to dealing with annual credit products,” she said. Customers, on the other hand, understand their options and would rather pay a few cents on the dollar for a payday loan than an average of $28 per bounced check or a $39 late fee on a credit card payment.

“What we are trying to do is help Congress understand how this industry works,” said Lisa McGreevy, president and CEO of Online Lenders Alliance. “The fact of the matter is that for a lot of people, it is less expensive to take out a payday loan than to have their electricity shut off and to have to pay a reconnect bill.”

McGreevy said the organization, which represents a number of online lenders based in the United States and regulated by the laws of the borrower’s state of residence, supports the Consumer Lending Education And Reform (CLEAR) Act introduced by Congressman Joe Baca (D-Calif.). She said the legislation provides consumer protection while ensuring continued access to credit.

As for the idea that lenders engage in predatory lending practices that take advantage of their customers’ vulnerable financial situation, McGreevy said lenders “don’t make anybody take out a loan.”

“Generally, the people who are looking for short-term help go this route because it’s convenient,” she added.

Lison, the budget counselor at Catholic Charities in Green Bay, has found that it isn’t necessarily having a low income, but poor money management, that leads to financial trouble. Though she said most of her clients fall within the $20,000 to $50,000 income bracket, “we see people who have zero income and we see people who have six-figure incomes.”

Everyone says, “If I just made a little more money,” Lison said. “It’s not really how much you make, it’s what you do with it.”

Justice | Trapped in a cycle of debt

On Arkansas death row or at parishes, Msgr. Harris serves by 'being there'