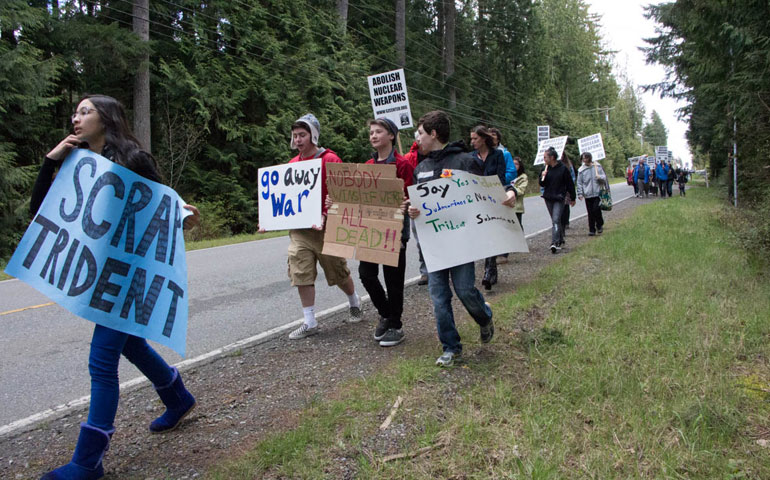 Fifteen Catholic youth from St. Leo Parish in Tacoma, Wash., led their parents and dozens of other community members in a protest against nuclear weapons April 14 outside the Naval Base Kitsap-Bangor about 20 miles west of Seattle.

The event was held in solidarity with a weekend of education and actions in Scotland dubbed "Scrap Trident." The Herald in Scotland reported that up to 2,000 people joined a march and a rally in Glasgow's George Square. Scottish demonstrations culminated April 15 in a three-hour blockade of the Faslane Naval Base in Argyll, home of the United Kingdom's Trident nuclear weapons. According to Scotland's Evening Times, about 250 protesters took part and 45 were arrested.

Naval Base Kitsap-Bangor is home to the largest single stockpile of nuclear warheads in the U.S. arsenal. Eight of the nation's 14 Trident nuclear ballistic missile submarines reside at this base; each carries more than 1,000 times the destructive power of the Hiroshima bomb and costs $77 million per year to maintain.

A single Trident submarine, according to Rear Adm. Joseph Tofalo, commander of Submarine Group 10, is equivalent to "the sixth-largest nuclear nation in the world all by itself."

In 2010, Congress voted to replace the aging Tridents with 12 new submarines, each built to last 40 years and designed with 16 missile tubes per vessel. The research and development phase of the project is ongoing, and construction of the submarines is to begin in 2021. The total acquisition cost of the program is estimated at $90.4 billion in fiscal year 2010 dollars, according to a 2012 Congressional Research Service Report.

The event with St. Leo youth began at the Ground Zero Center for Nonviolent Action located on 3.8 acres of wooded land adjoining the naval base. Participants formed a circle and middle- and high-school students read statements about the moral evil of nuclear weapons and suggested that funds used for their development and maintenance should be redirected toward education and health care.

They then walked a short distance from the Ground Zero property to the base's main gate, accompanied by peacekeepers in orange vests affiliated with Ground Zero Center.

Because of the young age of some participants, St. Leo staff required that the event be held as a vigil only, unassociated with illegal actions.

According to Lucy Dudley, director of faith formation for youth at St. Leo, students were prepared for the protest with educational, emotional and spiritual support. They studied documentaries and books, such as Sadako and the Thousand Paper Cranes by Eleanor Coerr, listened to speakers, and engaged in activities and retreats that encouraged discussions in light of Catholic teachings.

A key link to the U.K. activists was Bichsel, a longtime anti-war activist and a member of the Disarm Now Plowshares group. Also known as the Bangor 5, Bichsel and four others in 2009 cut through the Kitsap naval base's fencing and crossed a shoot-to-kill area spreading sunflower seeds, posters, and trails of their own blood.

Bichsel -- known as "Fr. Bix" -- was awarded the 2012 Greater Tacoma Peace Prize for his commitment to raising awareness of the moral implications of weapons of mass destruction through nonviolent actions and outreach and was recently announced as a 2013 Nobel Prize nominee.

Bichsel visited the United Kingdom, Norway and Sweden in December to attend the Nobel Prize Award Ceremony. During a stop in Scotland, he met nuclear disarmament activists, including organizers of the April 14 actions at Faslane.

Bichsel told NCR that he has increased his outreach to youth out of a sense of guilt for the state of the world that children have inherited. "My generation, and the generation following, have left so much violence, so many systems of exploitation, to our young people," he said. "I believe we have the obligation to let them know we've made mistakes, and help give them the strength to resist what we didn't have the strength to resist."

Described by St. Leo parishioner and parent Niko Colella as an issue that was once "right on the edge of consciousness," public awareness in the United States regarding nuclear weapons has ebbed and flowed since the Cold War. Sites like the Bangor naval base that once witnessed overflowing protests now draw smaller, older crowds. Yet those who remain are persistent.

Catholics in particular remember that former Seattle Archbishop Raymond Hunthausen in 1981 called the Trident base "the Auschwitz of Puget Sound."

Colella, whose son attended the vigil, explained, "We are taught and teach that it's not right to threaten anyone at any time. Why would we do this, then, between nations? It's tough to talk about this topic with kids, but we also can't live in a way that ignores a destructive monster and its power to harm that is almost beyond understanding.

"We must continue to voice our belief that these weapons of mass destruction are opposite to everything we hold dear about what it means to be a part of the human family."

Clare Bentley, a fifth-grader who participated in the vigil with her father and her brother, recalled that she'd felt fear when approaching the base with its armed soldiers, guard dogs, and a stark blue line marking the boundary between state and federal land.

But joining in songs and prayers, which included a blessing of the soldiers stationed a few steps away, reassured her. "Violence isn't the answer," Bentley said.

[Julie Gunter is a freelance journalist from Seattle.]

A version of this story appeared in the Apr 26-May 9, 2013 print issue under the headline: Tacoma Catholic youth pair anti-nuclear action with Scottish protests.