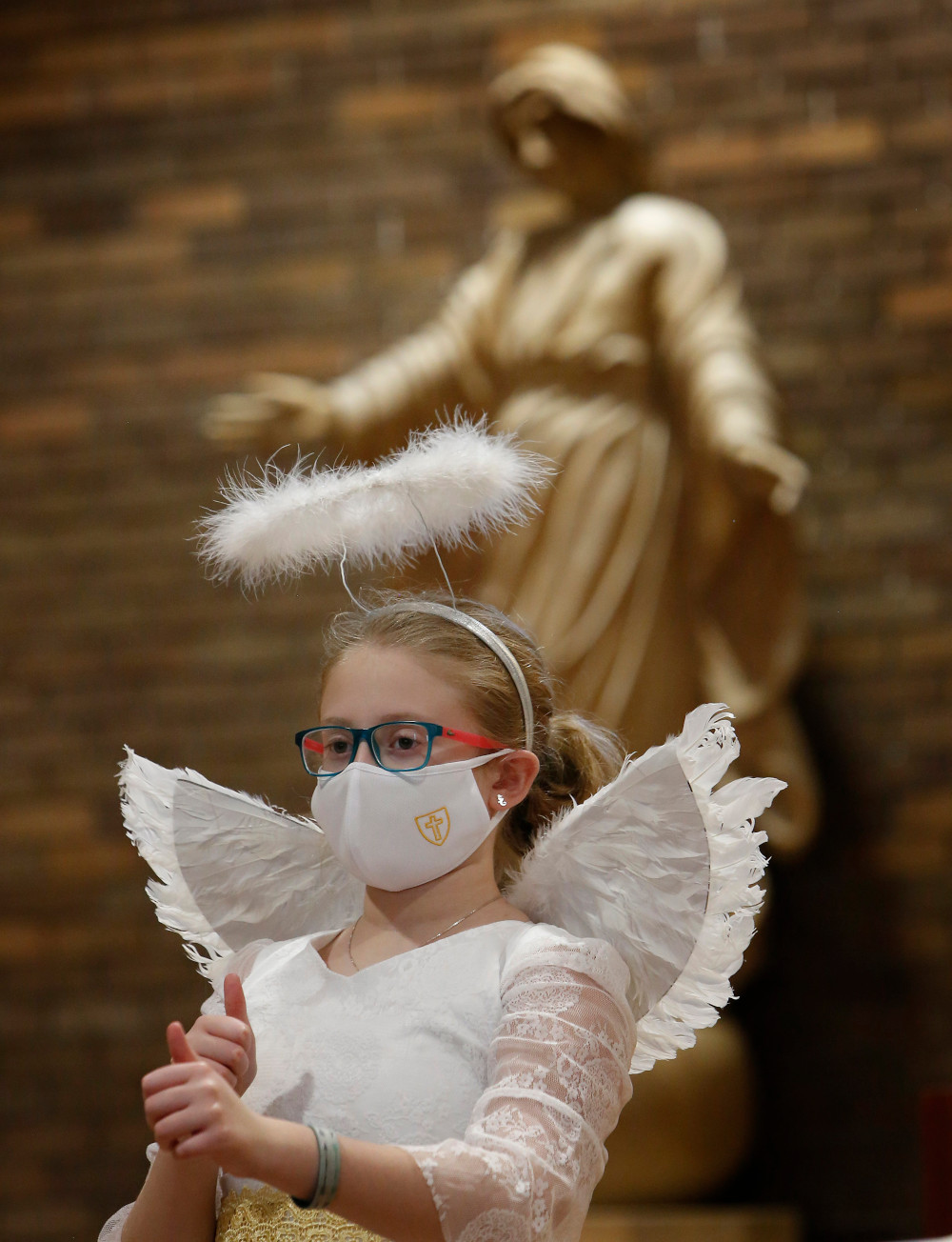 When music teacher Lynn Kingsbury at St. Damian School in the Chicago suburb of Oak Forest learned that her students wouldn't be allowed to sing in class because of COVID-19 restrictions, she made a dream of hers into reality — teaching the students how to sing in American Sign Language.

This year, the fifth grade's annual Nativity play and concert featured the students in costume signing all of the songs, along with a fourth-grade angel choir. Students doing remote learning also were featured in the production. The school recorded the concert Dec. 18 and made it available through its Facebook page and website.

"As I've been a teacher here teaching music, I've always wanted to incorporate American Sign Language with the lyrics of the songs. I've never really had time," Kingsbury told the Chicago Catholic, newspaper of the Chicago Archdiocese.

"So when I was told I could not sing this year because of the pandemic because it would spread the virus, I was thinking that it would be a great idea now to incorporate American Sign Language with the school so the students could then sign the lyrics of the songs," she explained.

Music is still part of the classes, but the students don't vocalize the song lyrics.

"Signing is a very expressive, beautiful language, so it goes with the whole," she said. "Music is very performance-based and sign language is also. The students have just been catching on and loving it."

Kingsbury is fluent in ASL thanks to her relationships with her three great-aunts who are deaf, including 92-year-old legendary aviator Jean Hauser, who became the first deaf pilot in the state of Wisconsin in 1965 and was Kingsbury's confirmation sponsor.

"I would sign with her, so I fell in love with it as a child," Kingsbury said. "I've kind of always just had it in my life."

Even though the students wear masks in class, Kingsbury has emphasized to them that part of ASL is also mouthing the words, so they have to do that too.

"I definitely want to follow the deaf community etiquette and I've told them all about it. It's a whole-body language," she said. "We have a nice vocabulary going right now. We could carry on a conversation."

Learning ASL is something the students will carry with them for the rest of their lives, said Jennifer Miller, principal at St. Damian.

"They have grasped every bit of this, from our youngest learners, our 3-year-olds, all the way through to our eighth graders," Miller said. "And they are taking this home and they are teaching their parents and their siblings. Their eyes are open to a whole new language and a great communication skill."

It is opening them up to a new group of people and expanding their faith too, she said.

As an unintended consequence of the classes, Miller said the faculty and staff should probably learn ASL "because the kids are going to start communicating and we won't know what they are saying."

The eighth graders have already caught on to that, Kingsbury said.

"They are having fun with it," she said. "I keep really emphasizing the fact that, 'You are doing something really special here and this is something you're going to have for the rest of your life. If you're in college and you have a friend who is hard of hearing or who is deaf you are going to be able to help them interpret or communicate with them.'"

Teaching ASL in her music classes has been beautiful, she said.

That enthusiasm came through before the pandemic with singing and it's there now with ASL.

"When they say 'hello' and they are saying 'hello' in American Sign Language and then 'I love you' in sign language with the hand, how you do that, and in the hallway walking by, with not a word said, the 'I love you' sign with 3- and 4-year-olds, that's pretty cool."