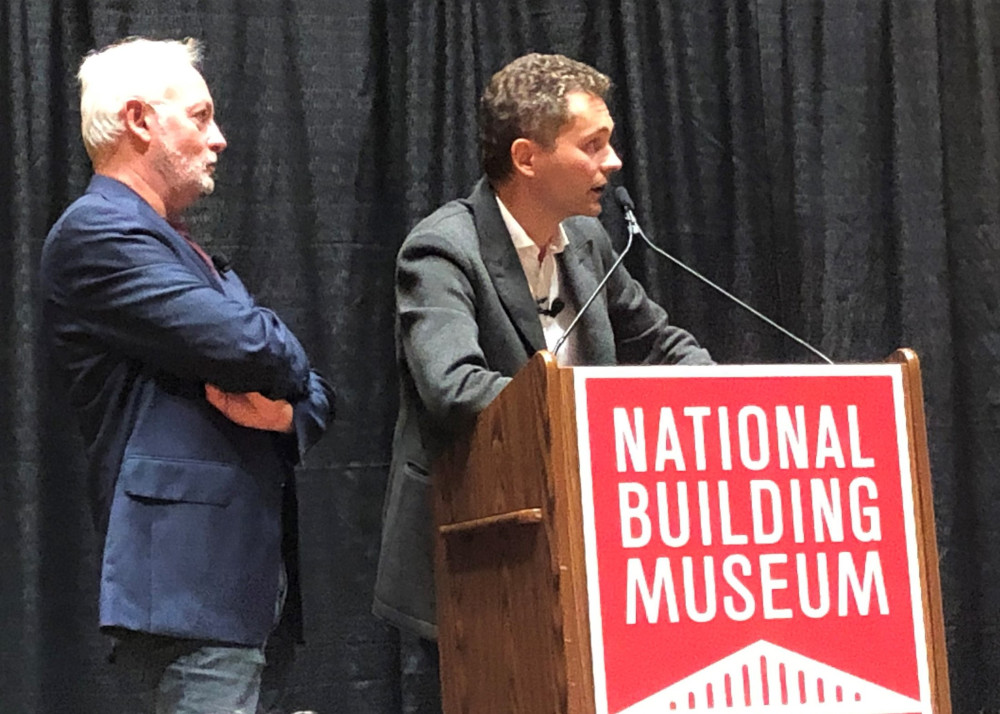 Philippe Villeneuve and Rémi Fromont, the chief architects leading the restoration of Notre-Dame Cathedral in Paris after the 2019 fire, speak Sept. 26, 2022, at the National Building Museum in Washington. (CNS photo/Mark Zimmermann, Catholic Standard)

The Notre-Dame Cathedral in Paris is "a monument of humanity," French architect Philippe Villeneuve told a Washington audience.

He spoke during a recent program at the National Building Museum on the project to restore the cathedral nearly three and a half years after a calamitous fire engulfed its roof and collapsed the spire.

Their remarks were delivered in French and translated live into English by Lindsay Cook, assistant teaching professor of architectural history in the Department of Art History at Pennsylvania State University. Their Sept. 26 lecture was titled "Notre-Dame de Paris: Restoring a Legacy."

A February 2022 cover story in National Geographic magazine noted that Villeneuve has led restoration efforts at Notre-Dame Cathedral since 2013, work that became urgent after the April 2019 fire.

Villeneuve thanked those in the museum audience, saying: "It is amazing to see, 6,000 kilometers away from Paris, the same spirit that we ourselves have for Notre-Dame ourselves."

He noted that before the fire, Fromont and a colleague had made the most complete hand-drawn survey of the roof to be done, and it has proven invaluable in reconstructing the cathedral's wooden roof framework. "He is responsible for the roof," he said of his colleague.

Villeneuve explained that a third French architect, Pascal Prunet, has connected the cathedral with universities and groups focusing on its components, its structure and its history, studying its burned remains to better understand the cathedral as the restoration work progresses.

"We are confident that the deadline of five years, introduced by the French president, is still possible," he said.

France President Emmanuel Macron had set a goal for the cathedral to be restored by 2024, the year Paris will host the Summer Olympics.

The two French architects came to Washington on a day when a full-sized replica of the cathedral's truss was raised on the campus of The Catholic University of America.

That 45-foot-wide by 35-foot-high replica truss had been hand-hewn and built on campus in 2021 by faculty and students from Catholic University's School of Architecture and Planning and by volunteers from the education nonprofit Handshouse Studio.

They replicated the traditional building methods used when the cathedral was built in the Middle Ages, 800 years earlier, based on blueprints provided by Notre-Dame architects.

As they had done a year earlier, the CUA students, faculty, Handshouse Studio representatives and other volunteers raised the replica truss on the University Mall next to the Basilica of the National Shrine of the Immaculate Conception.

Catholic University also hosted a panel discussion about the cathedral's restoration and an exhibit in its Crough Center for Architectural Studies that included student-designed replicas of Notre-Dame Cathedral and its elements, including its famous flying buttresses.

The French architects' lecture that evening was hosted by the National Building Museum, where "Notre-Dame de Paris: The Augmented Exhibition" was on display April 15-Oct. 9.

The interactive high-tech exhibit provided an augmented reality immersion into the 850-year history of the cathedral and its ongoing restoration.

It covered the construction of Notre-Dame Cathedral, highlighted events there in the centuries that followed, and detailed its restoration after the 2019 fire. From the laying of its foundation stone in 1163, the building of the cathedral took nearly two centuries.

In the lecture, Villeneuve pointed out some seeming miracles in the aftermath of the fire, like the cathedral's famous statue of Mary emerging largely unscathed, not far from piles of rubble from the collapsed roof.

He noted that "not a single piece of stained glass was damaged during the fire," but the windows were removed for cleaning. The cathedral's famous sculptures of chimeras, or gargoyles, also were not damaged.

And in a twist of fate, days before the fire, large statues of the 12 apostles had been removed from the base of the spire for restoration, so they escaped being damaged in the conflagration.

The cathedral's most famous relics -- including the reported crown of thorns worn by Jesus at his crucifixion, and the tunic of King Louis IX, St. Louis -- were carried out of the cathedral during the fire and saved.

"The furnishings were also rescued," Villeneuve said, adding, "The organ, in particular, was saved, thankfully. That said, there was dust and ash from the fire, as well as lead dust, which has needed to be cleaned."

The French architect described measures taken to stabilize the cathedral, including shoring up the flying buttresses with wooden centering to avoid structural collapse.

Fromont described how he and colleague Cédric Trentesaux had made the detailed study of the cathedral's roof before the fire. "These drawings were made entirely by hand. Our goal was to draw everything we saw," he said.

After the fire, those drawings guided their restoration work, as did other documentation on the roof, including by the carpentry firm that constructed the 19th-century spire and made a small model of it.

Fromont said the plan for the restoration of the roof and the spire is to restore them just as they were before the fire.

The work "will largely be done by hand ... the way the craftspeople working on the site work best is by working the way artisans did in the 13th century, which is by hand."

And Fromont said they scoured oak forests throughout France "for the best oaks to restore the roof framework and spire. ... They are incredibly tall, straight and frankly perfect." New trees will be planted to grow in their place, continuing the life cycle of forests, he said.

In his closing remarks, Villeneuve said a copper rooster sculpture that had been on top of the cathedral's spire was found after the fire heavily damaged on the street below, and it will be replaced on the new spire by a redesigned rooster sculpture.

"I think of it as a kind of phoenix," he said of the artwork that perhaps symbolizes the ultimate rebirth of the restored Notre-Dame Cathedral of Paris.