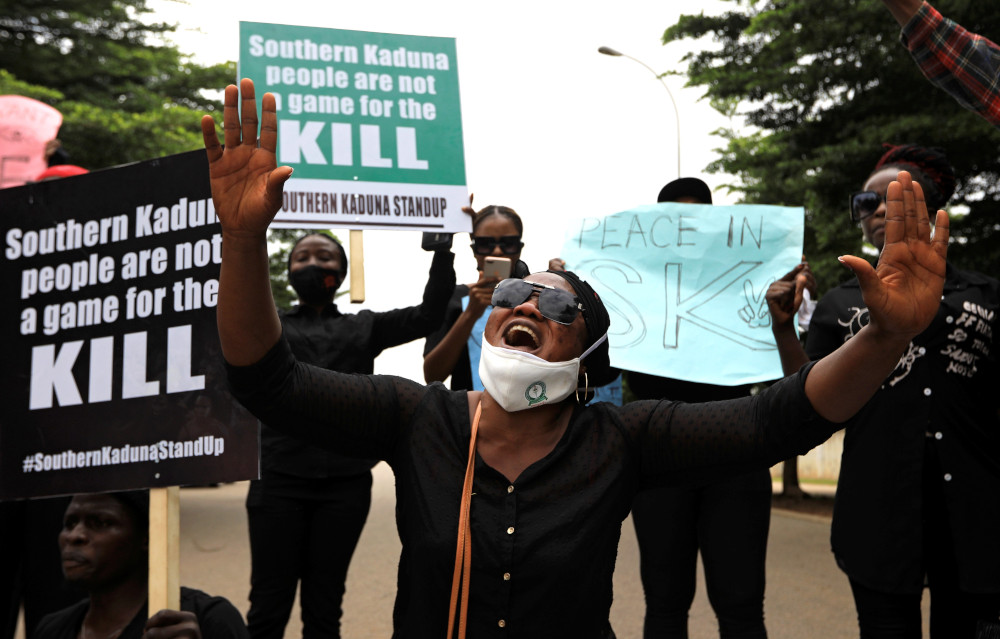 A woman reacts during a protest in Abuja, Nigeria, Aug. 15, 2020. The demonstration was against the continued killings in southern Kaduna and insecurities in Nigeria. (CNS/Reuters/Afolabi Sotunde)

Archbishop Antonio Filipazzi, papal ambassador to Nigeria, said the government was not doing enough to protect its citizens from violence, insurgents and other social vices. He also said the people being killed were not just Christians, but also Muslims.

Speaking at a news conference as part of the finale of yearlong celebrations of the silver jubilee of the Diocese of Osogbo, he said the federal government must awaken to its responsibilities of protecting citizens.

"Although southern Kaduna is an area where Christians and Catholics are mostly affected ... it is important to note that many Muslims are also being killed in other parts of the north, such as in Maiduguri, Borno state, where Boko Haram had bombed many mosques," he said Aug. 19. Boko Haram is a Muslim militant group active in northeast Nigeria.

Filipazzi advised the government to focus its attention on protecting citizens from the various vices ravaging the country instead of creating antagonism and divisions between Christians and Muslims.

Bishops in the Kaduna region met and issued a statement Aug. 17 that said: "The dark clouds of violence have enveloped our land. Our country is in the firm grip of the grim reaper."

"Two years ago, the military announced that it had degraded Boko Haram and we basked in the euphoria that Boko Haram was no longer holding Nigerian territory hostage. But our joy was short lived as the story has progressively gotten far worse," the bishops said.

"Today, almost the entire northern states are in the grip of these purveyors of violence and death. In the last three years, we have witnessed the relentless attacks and ransacking of entire communities by bandits in states like Benue, Kebbi, Plateau, Kaduna, Katsina, Nasarawa, Niger, Sokoto, Zamfara.

"Thousands of lives have been lost to these bandits, who have operated with relentless abandon," the bishops said.

The bishops credited state governors with trying to negotiate with criminals but criticized them for trying to appease them with money.

"This is unacceptable. We appeal to the governors to place the welfare of the victims of violence before these murderous criminals. Unless they are defeated in an all-out war, all appeasement by way of endless payments of our money will only feed their armory and strengthen their evil enterprise."

The bishops said the federal government also has ignored attacks by ethnic militias in northern Nigeria.

"All of this has taken its toll on the morale and confidence of the security agencies. We are hearing of young men abandoning the battlefields ... hundreds of soldiers are opting for early retirement from the service on grounds of loss of motivation," the bishops said.