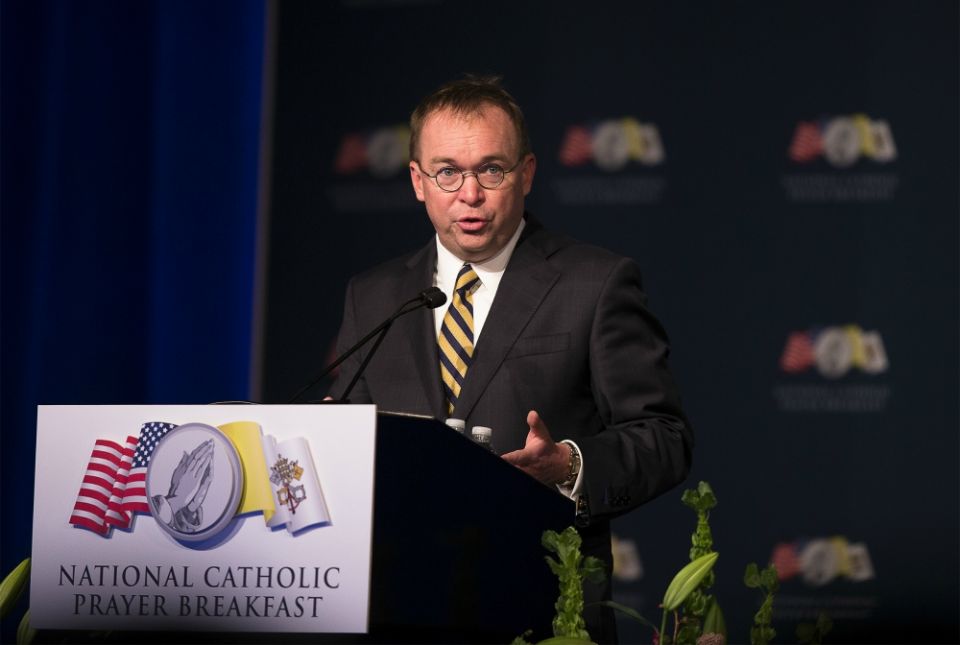 Trump is "fascinated by people of faith and very interested in the Catholic faith" and has "surrounded himself with Catholics at every level."

That's Mulvaney, trying to convince Catholic voters on a recent campaign call that the president, himself not a regular churchgoer, is a deeply religious man.

Trump seems "particularly sensitive to the, what shall I say, to the feelings of the religious community."

Similar sentiment, but this time it's not Mulvaney, but Dolan on Fox News' "Fox & Friends" show.

Trump is "working so hard to see that we can safely return to church as safely possible."

Trump is a "great gentleman" whom Catholics need "more than ever."

Again, the cardinal archbishop of New York, not someone paid to promote the president during his reelection campaign.

We get it. The Catholic vote — historically important in presidential races — is crucial in 2020. In 2016, Catholics were evenly split, with white Catholics going for Trump, while Latino Catholics favored Hillary Clinton. Trump's presumptive opponent this time is a Catholic, former Vice President Joe Biden.

In the wake of his bungling of the coronavirus pandemic, Trump's poll numbers have plummeted — even among people of faith, according to a new PRRI poll. And campaigning in time of coronavirus further complicates things.

Which explains why we're seeing a rash of virtual events aimed at voters of faith, especially Catholics.

The call with Mulvaney, a Catholic who served on Trump's cabinet as director of the Office of Management and Budget and currently is a special envoy to Northern Ireland, was hosted by CatholicVote.org.

A "digital town hall," it was billed as "an inside look" from a "trusted insider" about what it's like to be a Catholic working in the White House on "the issues we care about," according to a blog post by CatholicVote.org president Brian Burch.

In it, Mulvaney described a man virtually unrecognizable from Trump's public persona these past three and a half years — a problem Mulvaney blames on a biased press that pushes an inaccurate narrative.

"The media wants you to believe that the president hates immigrants ... that he's this xenophobic monster in the White House," Mulvaney said, repeating the administration's drumbeat of attacks on the press.

"Nothing could be further from the truth," he said.

Instead, Trump is a man of "fortitude and strength" who will "defend what he believes," Mulvaney said.

Although Trump doesn't often talk about his faith publicly, "it certainly does carry a certain importance in his heart," he told CatholicVote.org supporters.

CatholicVote.org, NCR readers may recall, received attention last fall for its controversial use of "geofencing" — which involves surreptitiously gathering location data from cellphones — at Catholic parishes in key battleground states, all in an effort to reelect Trump.

That tactic, however, lost its effectiveness this spring when states issued stay-at-home orders in response to the coronavirus.

Gone, too, are massive campaign rallies, such as the one planned by the group "Catholics for Trump" in early March in Milwaukee. That event was replaced with an online broadcast in April.

Instead, the president himself has reached out to Catholics and other faith leaders on at least two group phone calls. The first, on April 17, was ostensibly about reopening churches during the COVID-19 pandemic, while the second, on April 25, was supposed to be about government funding for Catholic education.

Both turned into mini-campaign rallies, with Trump both soliciting support from religious leaders and bragging about his success, even saying he has been the "best [president] in the history of the Catholic Church." (And it turns out the bishops were warned that the call might have campaign connections, as our columnist Michael Sean Winters learned.)

Participating in both calls were Los Angeles Archbishop José Gomez, president of the U.S. Conference of Catholic Bishops, and New York's Cardinal Dolan.

Dolan, more than any other church leader, seems hell-bent on delivering the Catholic vote for Trump. He not only kissed up to the president on the two calls, but helped him out with more praise during a livestream Mass from St. Patrick's Cathedral the next day and on "Fox & Friends" the day after that. To top off the week, Dolan again defended Trump during a Facebook live interview with America magazine editor Jesuit Fr. Matt Malone on Friday.

In response, NCR editorialized about the danger of church leaders being "masterfully manipulated" by Trump to bolster his reelection prospects — a position I reiterated to National Public Radio this week.

Rather than fawning over a president whose policies and rhetoric are hardly what could be called "pro-life" with a straight face, the bishops could have stuck with one message from Mulvaney and the virtual town hall host Timothy Huelskamp (former congressman from Kansas, now an employee of CatholicVote.org): that Catholics should get out and vote.

On the call, Burch noted CatholicVote.org will be spending $10 million to make sure that the 30% of "devout Catholics" who didn't vote in 2016 get to the polls.

"You put the Democrats in charge, and the values that you carry as a Roman Catholic are going to suffer," Mulvaney said. "If you want to see your values reflected in policy, there's really no choice. You have to not only vote for the Republican Party, you have to help them get elected."

Dolan all but told voters the same thing with his appearances and comments in support of Trump. While religious leaders should, of course, be able to communicate with and try to influence politicians, we should be able to tell them apart.

A version of this story appeared in the May 15-28, 2020 print issue under the headline: Cardinal sounds like a presidential apologist .