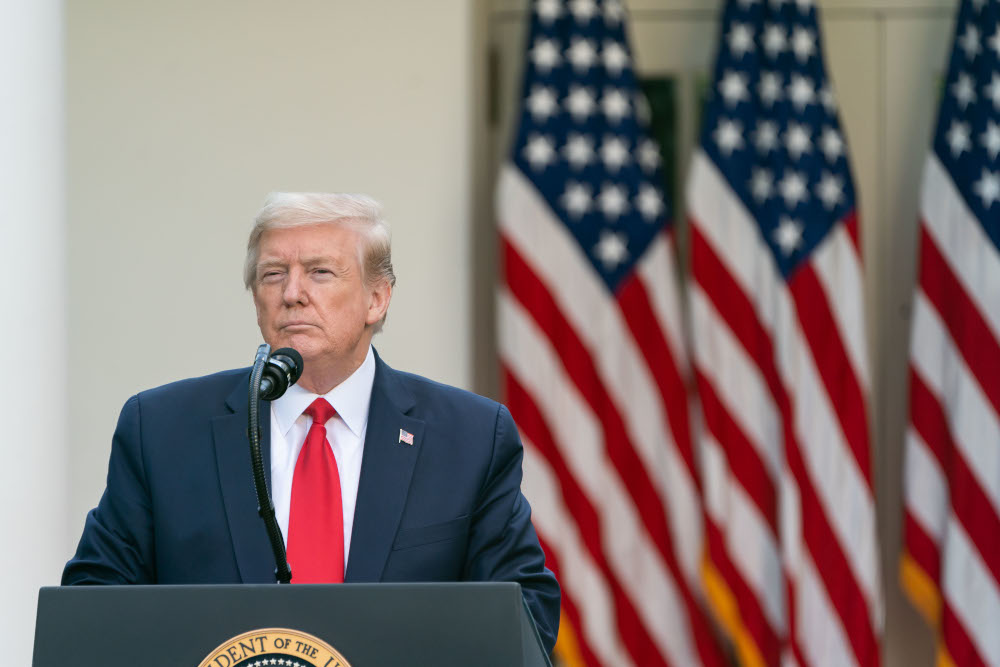 Editor's Note: This story was updated at 12:30 p.m. May 6 to add a statement from the U.S. Conference of Catholic Bishops.

Was it all planned? Was the telephone call between White House officials and Catholic leaders, first reported by Crux, really a working call about saving Catholic schools and it went awry? Or, did key prelates and staff at the United States Conference of Catholic Bishops understand all along that the point of the call was to signal the American Catholic community that President Donald Trump is their guy?

Certainly, New York Cardinal Timothy Dolan's appearance on "Fox & Friends" two days after the call suggests that the cardinal knew exactly what he was doing. He did not use that appearance to walk back his unctuous praise for the president, but instead doubled down.

Now, there is more evidence that Dolan, and at least some key staffers at the bishops' conference, knew that the call was partly a campaign rally. NCR has learned that Lauren McCormack, the executive director of the Government Relations office at the national conference, posted a note in a yahoo group for state Catholic conference directors the morning of the call. It read:

Additional note on this call today: you are welcome to forward the call information to others, including your bishops. Just be sure and note to bishops that the email addresses used to register for the call will be captured by White House and used for additional communication in the future, possibly including from campaign.

"Including from campaign"? So, it was obvious to all that the Trump reelection campaign was involved in this effort. Someone at the conference needed to say: "No, actually, bishops do not want their emails shared with the campaign. That is inappropriate." We should be saddened that no one did, but should we be surprised?

Eisen cautioned that he would need to know more to render any definitive judgment. "There is a great deal we do not know about what happened here and it is possible there are additional details that, somehow, this activity was authorized," he said. "But I would not have authorized it. It raises profound legal questions. It is crystal clear as a matter of ethics that this runs afoul of the fundamental American principle that we should render unto government what is government's and unto politics, what is political and the two should not be blended."

James Joseph, a partner at the law firm Arnold & Porter and a recognized expert on non-profit law, agreed with Eisen, telling NCR that "it would be a violation of the Hatch Act for the White House to share emails obtained by it with the Trump campaign." When asked if the bishops' conference itself violated the law by participating in a call it knew would be collecting emails for the campaign, Joseph said it may be an "impermissible campaign intervention."

In short, profound legal and ethical issues are involved. The U.S. bishops' conference has an Office of General Counsel. Bishops should be attentive to ethical issues.

After releasing a statement to other media, Noguchi shared it with NCR the next day: "The purpose of USCCB's participation in the April 25 call was to advocate directly with the highest government officials on behalf of U.S. Catholic schools, which face an unprecedented crisis because of COVID-19. A small part of a confidential briefing to bishops was a warning: because they would have to provide an email address to register for the call, they might later receive unwanted email messages from the White House, and possibly the campaign. This warning was based on cautious speculation, not on any communications with the White House. USCCB does not support or oppose any candidate for elective office."

"It is crystal clear as a matter of ethics that this runs afoul of the fundamental American principle that we should render unto government what is government's and unto politics, what is political and the two should not be blended."

How, then, are we to consider Dolan's conduct and that of the U.S. bishops' conference staff who helped organize this call? We need to be very clear that what was wrong with the call was the obsequiousness the cardinal —and Bishop Michael Barber of Oakland, California — showed to the president, and the failure of any of the other participants, including Los Angeles Archbishop Jose Gomez, the president of the U.S. bishops' conference, and Boston Cardinal Sean O'Malley, to even mention the issues on which the bishops disagree forcefully with the president.

A group of Catholic social justice activists sent an open letter to Dolan that was muddy about what was wrong. The letter complained that his call and subsequent appearance on "Fox & Friends" sent "a message that Catholic leaders have aligned themselves with a president who tears apart immigrant families, denies climate change, stokes racial division and supports economic policies that hurt the poor. There is nothing 'pro-life' about Trump's agenda."

Much of Trump's agenda is properly labeled "anti-life." Even when you consider those policy items where he has taken steps considered "pro-life," I fear the president has so tarnished the pro-life movement by his vulgarity and misogyny that whatever gains the pro-life cause can count will be short-lived. That said, the overstatement — "nothing" — mimics Trump, it does not refute him.

More importantly, the letter seemed to suggest that disagreement about policy is a reason to refuse to meet with a civic leader. The letter would have been strengthened if it had explicitly said "Of course, we do not object to your meeting with the president."

One of the signatories, Stephen Schneck, director of the Franciscan Action Network, offered a clarification.

"That was not how I read the letter. We understand that religious leaders need to meet with civic leaders at times," said Schneck. "You couldn't imagine this degree of chumminess with any other president, however. That is the part that really angered people."

Schneck penned an article at U.S. Catholic that put his finger on the real problem, the appearance that the bishops were engaged in a partisan endorsement.

Read this next: Editorial: Dolan delivers the church to Trump and the GOP

Social Service Sr. Simone Campbell, the executive director of Network, a Catholic social justice lobby, who also signed the letter, told NCR, "The part that was most disturbing to me was this: Yes, it is appropriate to meet about Catholic schools, but there was not any place [on the call] at which the bishops raised points of disagreement, which you can do with compassion." She added: "Where was the discussion of immigration, care for the earth, poverty, the administration trying to keep people off food assistance, of health care? You don't waste this opportunity to pursue Gospel justice."

The failure to keep the focus on Dolan's gushing over the president ended up helping Dolan change the discussion when he did an interview with the editor of America magazine, Jesuit Fr. Matt Malone. Dolan portrayed his engagement with the president as a form of accompaniment, but we all can smell the difference between accompaniment and alignment. All except Malone, who played along with Dolan's extensive dodge.

All I can say is that out here in the country, when someone steps in something smelly, as Dolan did on the call, they put their boots outside so the rain will wash them clean, they do not go to their neighbor and ask him to wipe them clean.

Why have no other bishops stepped up to criticize Dolan's effusive praise for the president? I will take up that topic on Friday.