The Beatitudes in the Age of Me First 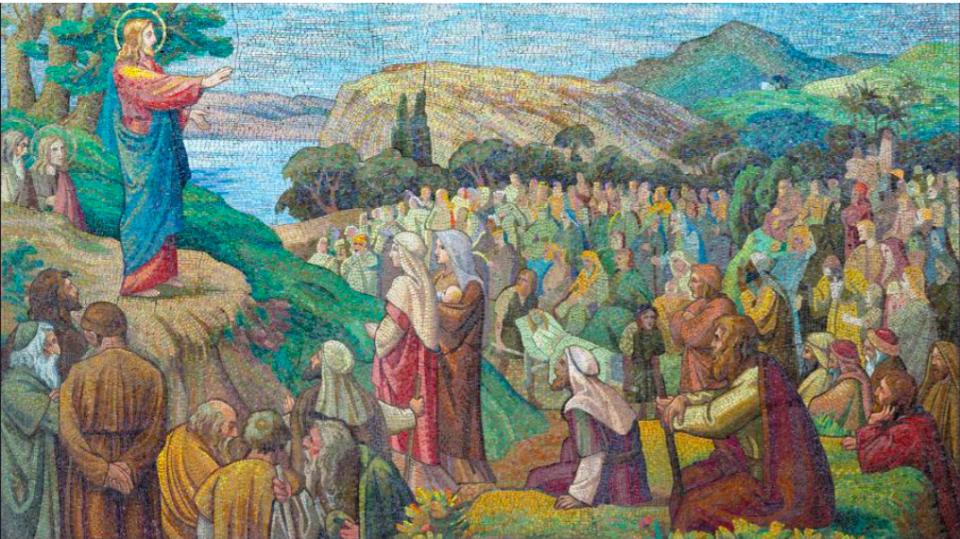 In an Age of Me First, where instant gratification takes too long, the entire Sermon on the Mount is flagrant heresy. Imagine if some clandestine group posted the Beatitudes on the boardroom walls of every advertising agency and on the john doors of every legislature and politburo in the world. After a week or two of screaming protests, those subversive sentiments would become as effortlessly ignorable as a flight attendant's instructions about what to do when the plane plunges into the Atlantic.

Bertrand Russell once said, "Most people would die sooner than think — in fact, they do so." And if the economic and political hucksters say any prayers of thanksgiving, it's for that reluctance.

The fact that ads for the same prescription medicines keep being subsidized for big bucks proves nobody seems turned off by the upfront disclaimer that certain side effects might include congestive heart failure, terminal diarrhea and leprosy. And that a president can conflate the least among us at the southern border into gangsters and get away with it should invite widespread horror but doesn't. What's happened to us?

The stranger thing, though, is that even the best of us read Luke's Beatitudes with exactly the same literalist predisposition as the modern Me Firster who finds them ludicrous.

I have no doubt most good people restrict Jesus' blessings to the literal poor, the destitute, the literally starving, weeping, despised. And with single-minded ease, they restrict the woes that Jesus hurls to the Donald Trumps and the bubbleheaded who reach the acme of reality on "Fox and Friends."

It's as though that travesty of truth requires us to be envious of those who shiver and starve in cardboard boxes because they've found life's purpose, so happy they could bite their frozen toes in bliss.

But no need to herniate all you believe just to keep on what you think is the good side of Jesus. Matthew has a much more satisfactory take on the same qualifications for fulfillment than the usually mellower Luke. "Blessed are the poor in spirit," says Matthew. "Blessed are those who hunger and thirst for righteousness."

Jesus isn't suggesting we envy the literal starving and sneer at those whose hard work enables them to be generous! Jesus is lauding those who are lucky enough to realize how hollow the politicians' promises are, how disappointing the advertisers' lures, and how unfulfilling the school systems that offer only the tools to make a basic living without helping to help kids discover what living is for.

There's only one unbending reality that judges true value, and that's death. If that's all there is, if me matters most, we're all on the deck of the Titanic, and we've only one direction to go. In a world without resurrection, we're all of us — puppets, paupers, pirates, poets, pawns and kings — just so much garbage waiting to be picked up.

But the answer that precedes and trails and surrounds Jesus in everything he said and did, is resurrection. That truth shows up momentary domination for the dead end that it really is, and makes a soul, unsatisfied and striving, whether swathed in mink or rags, hunger for good, and wish that good for all.

Soul seeing in the Age of Me First doesn't require much. It just asks us to look for our freedom in generosity instead of greed; to float on the grace of kindness instead of being weighed down by the albatross of avarice; to express gratitude rather than lack; to choose harmony over conflict; and, always, to see love instead of fear.

We may not have the temperament to be on the frontlines of change but we can change the way we see ourselves, our neighbor and the world and choose resurrection now. That soul change marks the beginning of Jesus' kingdom where all are number one, for that number — one — is truly all there is.

[Jesuit Fr. William J. O'Malley is the author of more than 40 books. He is now retired and living at the Jesuit home for old superheroes at Fordham University.]

Column | The Beatitudes in the Age of Me First