Why I signed the letter asking Barr to resign 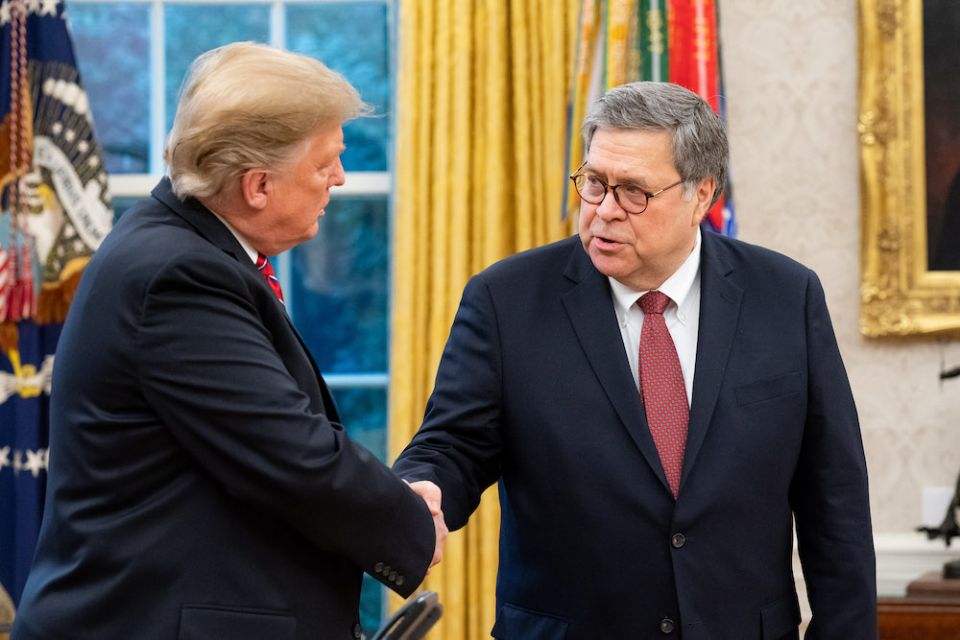 President Donald Trump, left, greets Attorney General William Barr on the date of the latter's swearing in as the 85th attorney general of the United States, Feb. 14, 2019. (U.S. Department of Justice)

Respect for the rule of law in our nation is under dire, unprecedented attack by a vengeful, unleashed president and too many enablers, including his unprincipled attorney general. Each of us must determine how we should respond to this growing nightmare and ethical challenge. This past weekend I was called upon to answer this question when I was asked as a former federal prosecutor to sign a letter calling on Attorney General William Barr to resign his office, among other things.

I drew upon my faith, my upbringing, and my duty as a citizen to consider this request. After prayer and reflection, I joined more than 1,100 former U.S. Department of Justice (DOJ) officials in signing the letter. Let me explain how I reached this decision and why it should matter to us all.

I am a senior distinguished fellow at the University of St. Thomas School of Law in Minneapolis and a professor of practice at the University of Arizona's James E. Rogers College of Law in Tucson, Arizona, where I have taught courses in crime and punishment, white-collar crime, and investigations for the last 10 years. Prior to becoming a law school professor, I served as an assistant U.S. attorney in Minnesota for 20 years during the Reagan, Clinton and both Bush administrations.

I spent most of my career with the DOJ prosecuting many hundreds of white-collar criminals, including scores of business executives, bankers, brokers, accountants and 15 lawyers. Those defendants were typically well-educated, often wealthy, and sometimes quite powerful and influential. I did my job as a federal prosecutor without fear or favor of any person because I was guided by the oath I took to support and defend our Constitution and uphold the rule of law. Further, I was bound to apply the law equally to all Americans regardless of their identity, background or status.

At times during my career, current and former elected officials attempted to influence my efforts to prosecute prominent persons. I resisted and rejected those efforts because allowing any political interference in the conduct of a criminal prosecution would violate my sacred obligation to ensure equal justice under the law.

What I faced as a federal prosecutor, however, does not come anywhere close to the recent conduct of President Donald Trump and Attorney General Barr in attempting to improperly influence the upcoming sentencing of Trump's close associate, Roger Stone, by giving him preferential treatment.

According to established court procedures and sentencing guidelines, four career DOJ prosecutors filed a sentencing memorandum that called for Stone's sentence to fall within those guidelines. After the president tweeted his harsh displeasure with their memorandum, the attorney general overruled those prosecutors in an outrageous act of political interference on behalf of the president. I decided that I could not remain silent about this attack on the DOJ's impartial independence. The circulating letter caused me to think as a person of faith about why I felt so strongly that action needed to be taken. Verses from the Bible helped guide me. For example, "So whoever knows the right thing to do and fails to do it, for him it is sin" (James 4:17).

I also thought about what my deceased parents and lifelong mentors would expect of me. My parents raised me and my four younger brothers in the Catholic faith, making great sacrifices to send all of us to parochial elementary and high schools. They also instilled in us a strong sense of patriotism, duty, integrity and honor. Moreover, they taught us to stand up for what is right and just. I have always taken inspiration in the Shea family motto, Vincit Veritas ("truth prevails").

I was fortunate to attend Georgetown University's School of Foreign Service on an Army ROTC scholarship. At  Georgetown, I deepened my religious faith and developed an ethical core through the influence of multiple Jesuits and other professors. This moral and ethical foundation served me well during law school and my four years of active duty in the Army General Counsel's Office at the Pentagon.

During my career as a federal prosecutor, I faced many high-powered lawyers, challenging cases and ethical dilemmas. I prayed often for strength and courage to do the right thing by doing justice, asking the Lord to guide me and help me do his will in both my personal life and in my profession. In particularly difficult times, I remembered my Dad's admonition: "When the going gets tough, the tough get going."

As a professor, I have tried to teach my students about the importance of ethical leadership in every course that I have taught. I have explained how their reputation for integrity and fairness is the most valuable asset that they will ever own. Finally, I have shared with them examples of fortitude and moral courage by lawyers and others to shape their own professional development.

All of the above aspects of my life were clearly in my mind as I read the Department of Justice alumni letter that I was being asked to sign. I agreed with everything in the letter but recognized that there could be some very negative consequences if I signed it. As I read and reread the letter, I became aware that I was being called to stand up and be counted. It was a matter of honoring my faith, my parents and all who have played a role in making me the person I am. So I signed the letter and then contacted numerous former DOJ colleagues to urge them to sign it as well. Many of them did. As of today, more than 2,450 former DOJ officials now have signed the letter.

I hope that you have read the entire letter, but I want to reiterate its closing paragraph since it is so critical to our nation’s future:

[W]e support and commend the four career prosecutors who upheld their oaths and stood up for the Department's independence by withdrawing from the Stone case and/or resigning from the Department. Our simple message to them is that we — and millions of other Americans — stand with them. And we call on every DOJ employee to follow their heroic example and be prepared to report future abuses to the Inspector General, the Office of Professional Responsibility, and Congress; to refuse to carry out directives that are inconsistent with their oaths of office; to withdraw from cases that involve such directives or other misconduct; and, if necessary, to resign and report publicly — in a manner consistent with professional ethics — to the American people the reasons for their resignation. We likewise call on the other branches of government to protect from retaliation those employees who uphold their oaths in the face of unlawful directives. The rule of law and the survival of our Republic demand nothing less.

In closing, I leave you with the last line of President John F. Kennedy's inaugural address: "With a good conscience our only sure reward, with history the judge of our deeds, let us go forth to lead the land we love, asking His blessing and His help, but knowing that here on earth God’s work must truly be our own." It is time for all of us to stand up and be counted.

[Hank Shea is a senior distinguished fellow at the University of St. Thomas School of Law in Minneapolis. He previously served as an assistant U.S. attorney for the District of Minnesota.]

Commentary | Why I signed the letter asking Barr to resign

The 11th step: What we say, and how we say it, defines us