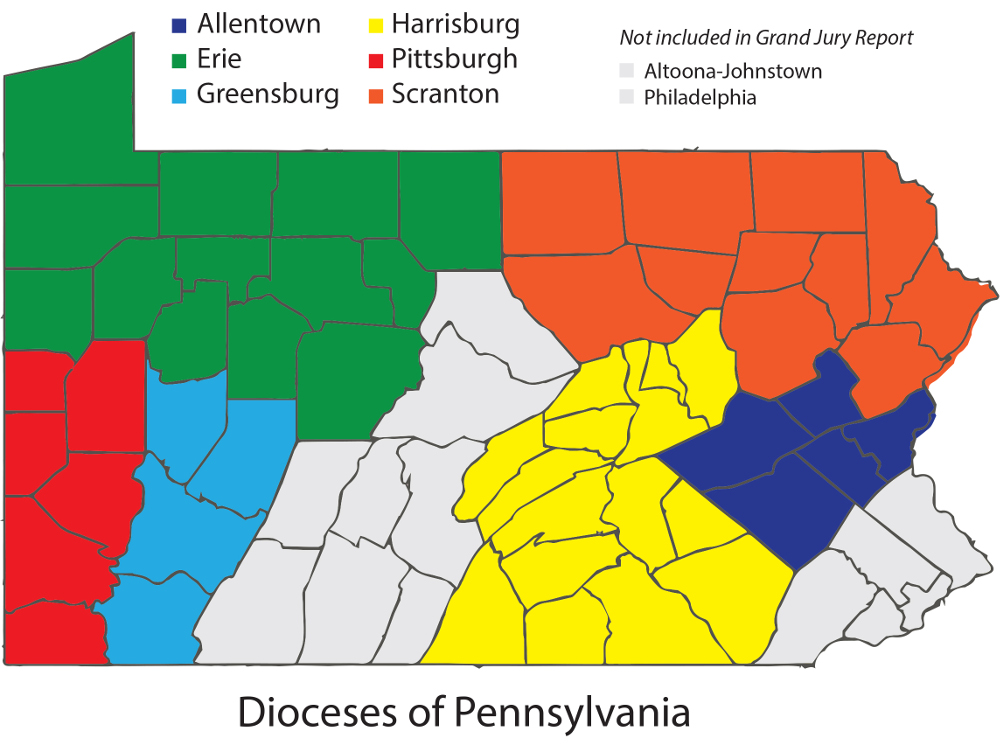 This is a map of Pennsylvania showing the six Catholic dioceses covered by a grand jury report on an investigation of abuse claims made in those dioceses. (CNS/courtesy of USCCB)

The bishops of Pennsylvania's eight Roman Catholic dioceses are supporting creation of an independent fund to compensate survivors of clergy sexual abuse.

Ever since the Aug. 14 release of the Pennsylvania grand jury report that graphically detailed the alleged sexual abuse of more than 1,000 boys and girls by some 300 priests and church workers in the state over 70 years, the bishops had "reflected deeply on the ugly record" of abuse and how "church leadership failed to protect our people over a period of decades."

The bishops made the comments in a joint statement released by the Archdiocese of Philadelphia Sept. 21.

The bishops recognize that although survivors of abuse that happened decades ago are time-barred from suing the dioceses under the statutes of limitation in Pennsylvania law, the General Assembly is considering proposals to lift those limits.

Doing so would require significant legislative support to advance bills in the state House of Representatives and Senate, and might be unconstitutional, experts say.

The bishops pledged to support "all reasonable and constitutional efforts" to help survivors and their families.

The church's proposed independent voluntary program, including a panel of experts with no "influence of the church or of any other institution in which children may have been abused," would require "substantial fiscal commitment and all dioceses will be seriously impacted."

The statement left several unanswered questions, such as whether the dioceses would jointly create the fund or whether state legislation would mandate it with contributions from the dioceses; which individuals would administer the fund; how much money each diocese would contribute to it; and how large such a fund would be.

By comparison, the Archdiocese of New York alone has paid out $40 million as of late 2017 to 189 survivors of clergy sexual abuse from more than 200 initial claims since the fund was launched in 2016.

The Pennsylvania bishops said they wanted to "provide an opportunity for sexual abuse survivors whose cases are time-barred from pursuing civil claims to share their experiences, identify their abusers, and receive compensation to assist their healing and recovery."

A statewide compensation program would "expedite the process for survivors to present their cases to experienced, compassionate experts who will determine an outcome for each case in a swift, efficient manner," and thereby avoid "prolonged litigation."

The program is better, the bishops argued, than lifting the statutes of limitation on claims by opening a one- or two-year "window" to sue for current time-barred civil claims because doing so "will inevitably result in bankruptcy for dioceses," they said.

"Bankruptcy would cripple the ability of a diocese to provide compensation and healing for survivors, while vastly reducing or eliminating social service programs that greatly benefit all Pennsylvanians by serving some of the most at-risk people in our communities," the statement said.

In recent years, several states have allowed a window on claims barred by the statutes of limitation. The ensuing civil suits led to declarations of bankruptcy by dioceses, years-long disputes in courts over diocesan assets and insurance, and ultimately settlements with victims, after legal fees.

In Pennsylvania, the bishops called for the proposed compensation program to be open to "any youth service organization, private or public, to opt into it to fulfill its obligations to survivors of abuse. We welcome legislative support for such a program."

State Sen. Joseph Scarnati, president pro tem of the Senate, in August called on the Catholic Church to establish a victim support fund "to make restitution to its victims."

While the bishops acknowledged they cannot undo the harm that childhood sexual abuse has caused, "in humility and repentance we hope the path forward offers a way toward healing for survivors and their families."