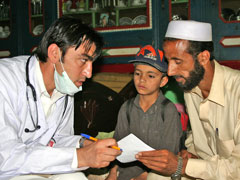 BALAKOT, PAKISTAN -- If there is any city that has a right to ask how much more can Pakistan take, it is Balakot.

Still recovering from a 2005 earthquake that essentially leveled the city, this mountainous community along the Kunhar River in northern Pakistan now must rebuild and repair again -- this time in the wake of the devastating floods being called the worst natural disaster in Pakistan’s history.

On a recent day, officials of Balakot’s sole hospital stood amid the flooded-out structure and said that time was not on their side, given the approaching winter and increased numbers of those coping with new health problems.

“We will try to rebuild the hospital, but people are very worried,” said hospital director Zia Ulhaq, noting that there is now no other health facility for a mountainous region of some 300,000 persons. “All the valley depended on this hospital. We need a hospital immediately.”

If anything, that is an understatement. For a week in September, I accompanied colleagues from the humanitarian agency Church World Service as they tended to medical needs and distributed food in the northern Pakistani province of Khyber Pakhtunkhwa, formerly known as the North-West Frontier Province, an area that borders Afghanistan, as well as the disputed area of Kashmir.

Khyber Pakhtunkhwa was the first region affected by the recent floods; when I saw it, the province’s residents had already begun cleaning up and assessing what next steps were needed, just as parts of southern Pakistan, such as Sindh, remained underwater.

Though post-flooding conditions in Khyber Pakhtunkhwa may have seemed less dramatic compared to the tragedy still unfolding in the south, most of those who perished from the floods lived in Khyber Pakhtunkhwa, and the province took a huge hit in terms of homes lost: 200,000 by some estimates. Overall, the floods have affected one-fifth of Pakistan’s land mass, about the size of Italy, and disrupted the lives of some 20 million people.

What I saw in Khyber Pakhtunkhwa was sobering and telling. More than a month after the floods, bridges were still out and portions of roads closed; some areas still remained inaccessible to rescue and humanitarian teams. There was talk that denuded and deforested mountainsides, reportedly the result of illegal logging by a powerful timber mafia working in concert with antigovernment militants, contributed to the floods.

The floods had worsened what was already a perilous humanitarian situation in a starkly poor region, marked by chronic malnutrition among children and a host of medical problems, including tuberculosis, upper respiratory ailments, and skin and eye infections. And all of this taking place in an environment in which literacy remains low among men and almost nonexistent among women.

It is also a place where strict, conservative gender roles remain the norm. Given that, I was surprised to be given an opportunity to interview several women who had survived the floods. Fatama and Salima, who between them had 13 children, noted that such a serious flood had not been part of anyone’s memory -- it had been nearly a century since the region had experienced floods of such magnitude.

The floods of late July had destroyed their plots of land, left the women and their families homeless and without any means of livelihood, resulting in a disquieting and disorienting season of Ramadan and Eid.

“Normally Eid is a time of happiness,” Fatama, 45, said. “But this Eid we don’t feel anything. Our every happiness was our house. That was our paradise. Now we’re homeless. We don’t know where to go.”

It will be up to humanitarian groups like Catholic Relief Services to repair and rebuild homes. Jack Byrne, country director for the Baltimore-based organization, said there has been a particular cruelty about this disaster, given that parts of Pakistan are still trying to recover from previous disasters -- the 2005 earthquake in the north and last year’s displacement crisis in the Swat Valley, an emergency caused by clashes between the Taliban and the Pakistani military.

Byrne noted that while the casualty figures from the floods have remained relatively low overall -- some 2,000 persons, compared to 79,000 dead in the 2005 Pakistan earthquake and 250,000 in this year’s Haiti earthquake -- the particular difficulty of this “slow-moving” emergency is that the livelihoods of millions are now affected. “It’s brought people to their knees,” Byrne said in an interview at CRS offices in Islamabad on the eve of Eid. “Now people will have to get back and try to live.”

That will not be easy in a country where even without contending with floods, acts of violence -- sometimes sectarian, sometimes random -- have cast a pall over day-to-day life and have also made international donors skittish. For his part, Byrne said such violence cannot and should not stop humanitarian groups from doing their work. “There are layers and layers here of so many issues -- it’s a hugely complex country,” Byrne said. “But I think it’s critical that we don’t stop and pull away from the disaster.”

Even so, there are worries -- real worries -- about what the floods portend for Pakistan. Several humanitarian colleagues told me that the flooding, and the attendant need for rebuilding and repairing huge sections of the country, present the most serious challenge to Pakistan since the 1947 partition with India. “The Pakistan nation does not exist now,” said one colleague. “It’s in pieces. It’s looking for a viable system. It’s looking for a leader. Pakistan has nuclear weapons but doesn’t have enough electricity to light houses.”

At a Sept. 8 forum in Islamabad focusing on the ways the floods are affecting the country’s already serious problems of hunger and malnutrition, the mood was glum.

While Wolfgang Herbinger, the Pakistan-based country director for the World Food Program, said it did not appear that famine loomed for the country, he and other experts warned of a host of potential problems.

“The food crisis could expand into a long-term problem if farmers cannot get the seeds, draft animals and irrigation repairs they need for the fall,” said Morosin Ernesto, who heads the humanitarian aid arm for the Swiss Agency for Development and Cooperation in Pakistan. Of particular concern, he said, is the upcoming planting of wheat -- the nation’s most important crop. “If farmers are unable to plant, a massive loss of food production in 2011, and possibly long-term food shortages, could result,” he said.

With perhaps a quarter of the nation’s current crop now lost to the floods, the disaster has “indeed made the [already] food-insecure areas much more insecure,” Ernesto said of parts of the country that were already having trouble in securing enough food before the floods.

Moreover, he said, the flooding has destroyed logistical and transportation systems; rotted food stocks in a country where poor people cannot easily store food; and laid waste a canal and irrigation system on which the nation’s farms are heavily dependent.

“It’s a catastrophe,” said Luigi Damiani, representative of the United Nations’ Food and Agriculture Organization. “It’s like a snowball, the consequences the farmers will have to pay for.”

Concerns of a different sort were raised a week later, when the International Crisis Group, an independent advocacy group, said in a statement that Pakistan’s government and international organizations should safeguard against Pakistan’s military dictating the terms of rehabilitation and reconstruction efforts.

In its Sept. 16 report, the International Crisis Group noted that Pakistan “not only faces an unprecedented natural disaster, but also confronts the twin challenges of stabilizing a fragile democratic transition and countering violent extremism.”

The worries over military and civilian relations stem from the fact that Pakistan’s civilian government, the report said, “already tackling an insurgency, and its institutions, neglected during nine years of military rule, lack the capacity and means to provide sufficient food, shelter, health and sanitation without international assistance.”

Robert Templer, the group’s Asia director, said that if military objectives dictate rehabilitation and reconstruction efforts, “a population exhausted by conflict could become a soft target for militants, making stability in the northwest even more elusive.”

How stability might take root in the north will ultimately depend on how those affected by the flooding cope with painful, even brutal challenges.

The experiences of two survivors offer a small glimpse into the possible tests ahead for Pakistan. Neither Noor Paras, 72, nor Said Qamar, 48, residents of nearby villages in Khyber Pakhtunkhwa’s Shangla district, are strangers to what Ayaz Ahmad, a staffer with the Pakistan humanitarian group Help in Need, calls “a survival life.”

Outsiders often call the residents of Khyber Pakhtunkhwa “hard,” an appellation meant as both compliment and as objective observation about lives of hardship born from years of working the land. And certainly Paras and Qamar qualify as having lived difficult lives even without the challenges of a torrential flood and its aftermath.

But there are telling differences in their experiences. The home of Paras, a farm laborer who has lived 30 years in Ziariatabad, a village that adjoins the Indus River, was damaged but not destroyed. Paras has three adult sons, one of whom is helping with cleanup and repair, while the two others are able to send money home from Karachi.

But Qamar, 48, has a large family to support -- he and his wife, Pareena Bibi, are raising 12 children, ages 5 to 23, including eight of their own and four nieces and nephews. Most critically, the family’s century-old homestead property, which produced fruits and vegetables for their own use and as a source of income, was totally leveled by a landslide of water and mud, rocks and boulders.

Paras has already begun rebuilding and repairing his home; but Qamar admits to still being traumatized by recent events. He is contemplating whether he can salvage his land -- which once bore the savory riches of apricots and bananas, melons and peaches, potatoes and chilies -- or should move to one of Pakistan’s urban centers to begin life anew.

Ahmad and his Help in Need colleague, Iftikhar Ahmed, said it was obvious that Qamar faces a host of potential stumbling blocks. Unlike the older Paras, who can repair his home and rely on his grown sons for financial support, Qamar must find a way to support his family and has, for the moment, “no alternatives for livelihood,” Ahmed said. “He has a big responsibility. It’s too difficult to rehabilitate the land. It will take too much time.”

Changing a life at the age of nearly 50, Ahmed said, would not be easy and would require patience and time, especially for one whose family had been farming for 100 years on the same plot of land.

“You can start something in the city,” Ahmad said. “But that could be difficult. He [Qamar] probably doesn’t understand life in the city.”

Multiply that problem by 20 million, and you have some idea of the dilemma Pakistan now faces, said analyst Wajahat Latif, a senior program advisor to Church World Service in Pakistan.

“I think the fabric of this society,” he said, “is going to be stretched very, very thin.”

[Chris Herlinger, a New York freelance journalist who writes frequently on humanitarian issues for NCR, was recently in Pakistan on assignment for Church World Service.]