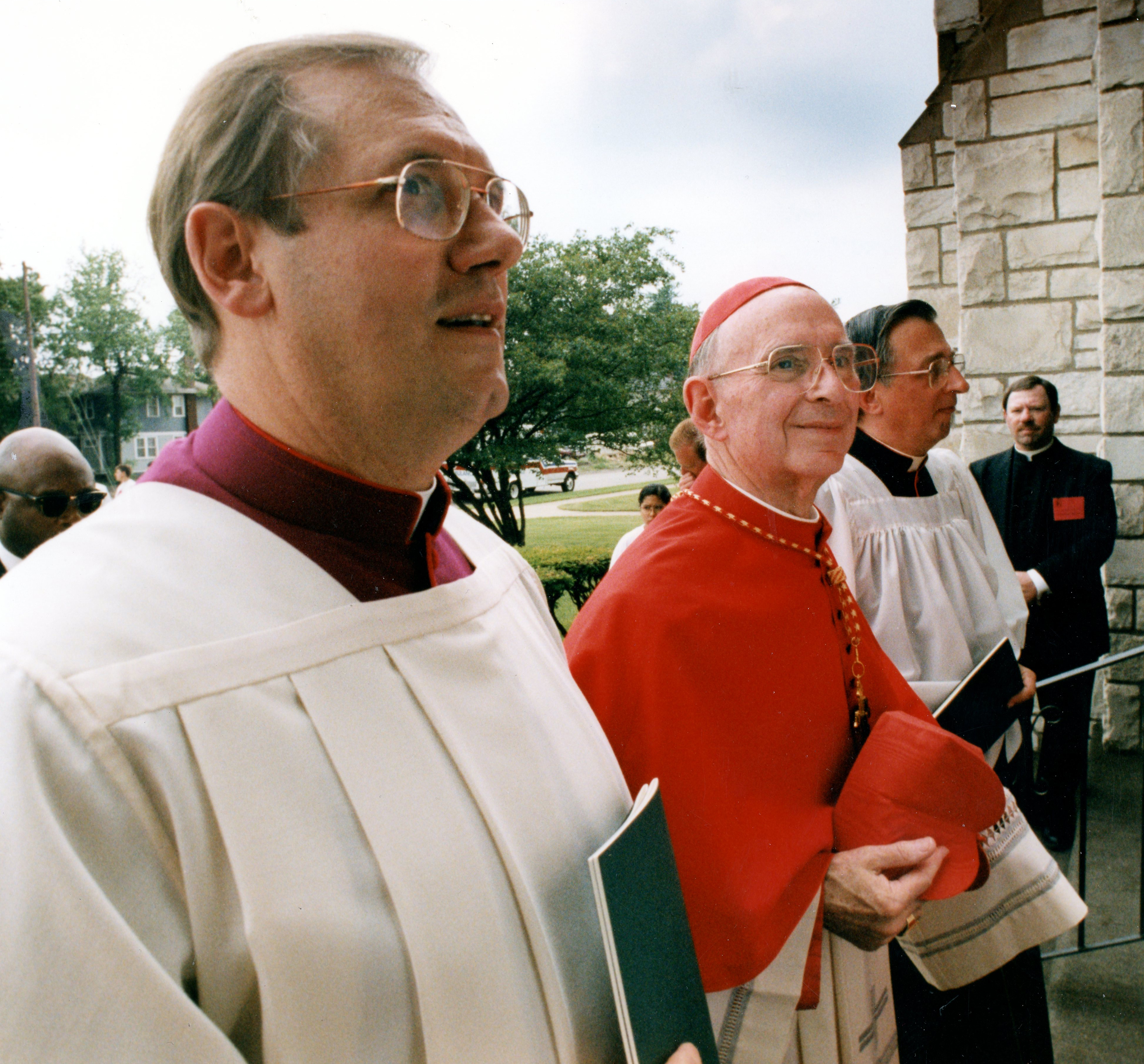 Chicago Cardinal Joseph Bernardin, in red vestments, who died in November 1996, is pictured that year entering Holy Angeles Cathedral in Chicago. In December 1983 at New York's Fordham University, Bernardin delivered a landmark lecture outlining what he called a "consistent ethic of life," using the Catholic tradition to articulate a defense of life at every stage, and in a way that could cross religious and political boundaries. (CNS/Chicago Catholic/Karen Callaway)

Since Cardinal Joseph Bernardin introduced the "seamless garment" approach to life issues 35 years ago, the notion has been both divisive and formative for the church, according to speakers at a Dec. 11 panel in New York.

The event, "A Consistent Ethic of Life 2.0: An American Catholic Dialogue Rebooted," was held at Jesuit-run Fordham University, the site of Bernardin's 1983 speech.

The cardinal was the chair of the U.S. bishops' pro-life committee when his seminal talk connected poverty, euthanasia, nuclear war, abortion and other life issues into a single "consistent ethic of life at every stage and in every circumstance."

The cardinal's presentation "ushered in a new way of viewing moral living which emphasized the protection of the unborn, care of the poor, the elderly and the environment as interrelated and intertwined," said retired Bishop Gerald Kicanas of Tucson, Arizona, who currently is apostolic administrator of the Diocese of Las Cruces, New Mexico.

"This 'out of the box' thinking is just what was needed to move beyond the impasse that had formed within the church and in society around life issues," he said. Some ignored the unborn focusing their passion for those on the margins. Others upheld the right to life of the unborn without any consideration for the degradation of human life found in the plight of the poor and even less for the care of creation."

Bernardin, who was Chicago's archbishop from 1982 until his death in 1996, used the consistent ethic to "bring warring factions within the church who feel passionately about one or another life issue to come together in support and defense of everything that upholds life and its God-given dignity," Kicanas said.

The "consistent ethic" has been resisted from the time it was first presented.

Kicanas said critics thought it made all moral issues equivalent, and some felt the approach was not aggressive enough in confronting a secular society that dismissed the rights of the unborn. Others said Bernardin watered down the church's clear teaching by linking life and social issues in a consistent ethic.

Kicanas said, "The separation of the broad range of life issues has resulted in a red/blue world where affiliation with one's political party trumps one's faith. The camps have been formed and allegiance to one camp in opposition to the other is expected, even required. Party allegiance becomes the frame by which truth is determined."

As a result, "the rich, comprehensive social teaching of the church has been blemished by the cherry-picking approach of too many today," he said.

Kicanas said the consistent-ethic approach has ripened and matured in the Catholic church since 1983, and become part of the teaching of each pope, through word or example.

"There has been a consistency and continuity of magisterial teaching on the interrelatedness of the life issues from John Paul II to Benedict XVI to Francis," he said.

Dialogue and discussion are the keys to healing the polarizing rift within church and society, Kicanas said. He quoted Pope Benedict: "Dialogue without ambiguity and marked by respect for those taking part is a priority in the world and the church does not intend to withdraw from it."

He said Bernardin envisioned dialogue that led to "common ground" where participants discover unity amid diversity and diversity amid unity.

Beaty is an evangelical Protestant and founding editor of Her.meneutics, the Christianity Today blog for women.

Beaty said evangelical witness in the public square has been compromised in recent years by partisanship and political alignment. In focusing almost exclusively on the unborn, evangelicals "identified with a political vision that blames the poor for their own struggle, shrugs at gun violence and degrades the environment," she said.

Beaty said embrace of a consistent ethic could set evangelicals "free from political binaries" and restore the original meaning of their name: "good news."

Rabbi Jill Jacobs said the consistent ethic is built on a framework familiar in Judaism, where any injury to a human is an injury to God, and God's human creations have an obligation to stewardship. Jacobs is executive director of T'ruah, The Rabbinic Call for Human Rights.

Although Catholics and Jews differ on when life begins and the morality of abortion, there is significant overlap in other life issues, including capital punishment, social justice and the treatment of immigrants and people at the margins of society, she said.

"The consistent ethic inspires us to think more broadly about the world we want to create," Jacobs said.

Herb Geraghty, director of communication for Rehumanize International, said commitment to a consistent ethic does not require belief in a higher power. A self-described pro-life atheist, Geraghty said, "The consistent ethic is an incredibly basic line that can be accepted by people with radically different beliefs."

"The 'consistent' part is important," Geraghty said. "You can't believe in a consistent ethic for the pre-born while throwing others under the bus."

Geraghty said although young people are becoming less aligned with religious groups, they are not losing their pro-life ethic. In a secular age, "pro-lifers need to position ourselves as a progressive movement for human rights and not a regressive movement against women's rights."

In response to a question from the audience, Kicanas said applying the consistent ethic to the issues of genocide and war requires "continual discernment and the wisdom of Solomon to know when, where and how to respond to the taking of human life. How do we stand up against huge injustice? And where does action on our part to protect others begin and end?"

The event was organized by the Fordham Center on Religion and Culture and moderated by David Gibson, the center's director.

A version of this story appeared in the Jan 11-24, 2019 print issue under the headline: Panel: 'Seamless garment' unites Catholics on life.