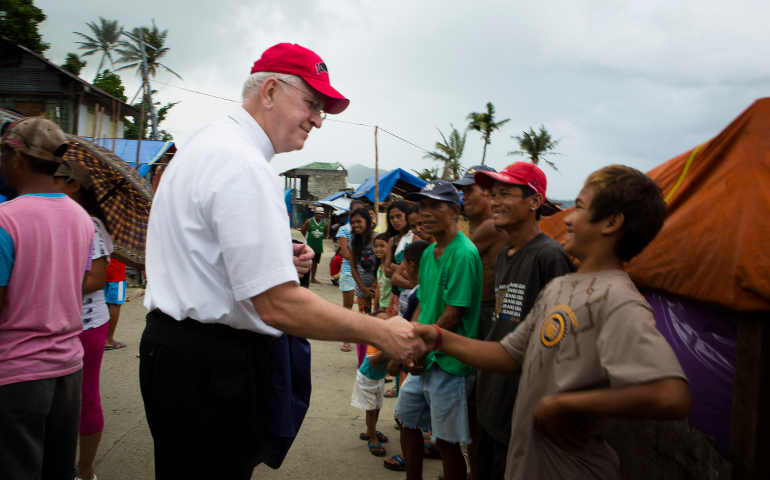 Archbishop Joseph E. Kurtz visiting Anibong, one of the communities in the Philippines affected by Typhoon Haiyan. Kurtz cited US church aid to these communities as “instructive” of how the bishops’ conference “is seeking to support people who are especially wounded and vulnerable.” (CNS/Tyler Orsburn)

A key question for the nation’s Catholic bishops, says their president: How can they encourage one another in their ministry while respecting different leadership roles?

Louisville, Ky., Archbishop Joseph Kurtz said he is examining, “What does it mean for us to be instruments of encouragement to one another as bishops?”

“I think the conference is not meant to take the place of leadership of bishops, it’s meant to support that leadership,” said Kurtz, who was elected to lead the U.S. bishops' conference last November and is serving a three year term.

“Just as a bishop’s leadership in a diocese is not meant to take the place of the leadership of the baptized faithful and the priests who are serving -- but it’s meant to inspire and be a catalyst,” he continued.

Kurtz was speaking in an NCR interview Thursday at the end of the bishops’ spring plenary assembly, held in New Orleans this week. The assembly, which saw the bishops on Wednesday address 17 issues at breakneck pace before listening to a series of speakers on Thursday, wrapped up Friday morning with prayer.

Beyond the role of the U.S. bishops’ conference, Kurtz also addressed in his interview the changes the church has seen since last year’s election of Pope Francis and expectations of an upcoming October global meeting of bishops at the Vatican, known as a synod and addressed to the issue of family life.

As U.S. bishops’ president, Kurtz will be one of the only American prelates to attend that synod, which has raised expectations that Francis may be considering changes to some church practices, especially regarding divorced and remarried Catholics.

Asked if he was worried about those expectations, Kurtz replied: “I’m not worried. Jesus said, ‘Do not be afraid.’“

“I think expectations do kind of alert us to interest,” said Kurtz. “And that part I think is very good.”

“I guess, theoretically there could be some downsides, that people will have such expectations they’ll be only disappointed,” he continued. “I don’t know.”

“His gestures are the things that most people talk about,” said the archbishop. “He also, I think, is taking a very thoughtful approach. He’s saying, ‘I want to reach out and warm hearts and heal wounds.’“

Following is NCR’s full interview with Kurtz, with some editing for context and length.

NCR: What’s been going on in the past couple of days? How do you assess the work that you bishops have been engaged in?

Kurtz: First of all, the role of the president: I see this really as an act of service. An act of service to continue to bring together our bishops in unity, in preparing our bishops corporately to assist one another as they serve in their respective dioceses.

And I think on that level I saw a lot of very good exchanges, a lot of good things going on. I’m eager to get the evaluations [of the assembly from bishops] because it’s one thing for me to think something was good and it’s another thing to hear from others.

I think the interaction that we had concerning the topic of poverty and evangelization, the topic of marriage and the economy -- were both themes that are very much part of the priorities that have been set by the bishops’ conference and obviously the priorities of Pope Francis.

That was the first thing. I think, secondly, part of our role as a conference is to be able to see how we can address issues of public policy and also issues that would be beyond the scope of a diocese.

You saw the presentations that occurred with Catholic Relief Services in the Philippines. I hope that was instructive both for the bishops themselves to take a certain healthy pride that the bishops’ conference is seeking to support people who are especially wounded and vulnerable. It’s also a way of thanking people who were especially generous.

You mentioned how the talks Thursday morning addressed themes Pope Francis has spoken about -- marriage, poverty, economy. We’ve done some coverage in the past few months -- on Cardinal Rodriguez in Florida, Archbishop Tobin in Pennsylvania -- about how there’s a kind of a new mission style with Francis and some bishops aren’t sure how to listen to it. How do you see that?

Well, don’t you think we’re going to learn a good deal with how things unfold with the synod? Because one of the things that our Holy Father has said very clearly -- he really, in a sense, gives leadership by gestures, doesn’t he? His gestures are the things that most people talk about. And I’ll be honest with you; they’re the things that come to my mind when I think about the leadership of Pope Francis.

He also, I think, is taking a very thoughtful approach. He’s saying, ‘I want to reach out and warm hearts and heal wounds.’ Was it in Rio that he asked, ‘Has the church lost its capacity to warm hearts’?

I think that approach -- he’s saying, ‘Let’s do this.’ But then he’s saying, ‘I want to increase collegiality, I want to really make sure that I’m hearing voices from throughout the world.’

And so the brief summary that I was able to give on the response that went to the synod I think is something that probably will catch the eye of people throughout the United States more than any other preparation for synod.

I suspect when the Instrumentum Laboris, the working document, is issued I think there will be more than the average number of people who will want to read that.

Because it’s an extraordinary synod, you’re going to be one of the only bishops from the U.S. that will be able to attend. How do you see that role?

I think there’s only been one or maybe two other extraordinary synods and usually you go back and say, ‘Well, let me see how it happened the last time.’ So we don’t have the same, in a sense, history, that we would have -- and I suspect it may very much have the fingerprint of Pope Francis on it.

So I’m going to have to be a little flexible and open to the way in which he’s saying that he would like a lot more dialogue, a lot more opportunities to hear.

Past synods -- the only one I ever went to -- consisted of interventions that each bishop who was a delegate gave. Now, everybody thinks their own is the most interesting but it wasn’t really as much dialogue. Pope Benedict, I think maybe four or five years ago, introduced the idea that in the evening of the synod there would be that free, open notion. And that was new.

I’m guessing -- and my guess is probably as good as yours -- that there will probably be some opportunities for more interaction. The interaction that we did have, which I liked, was the small groups. Because the small groups were in language groupings and maybe there were 11 or so groups and two or three were in English.

I personally found those to be very enriching because you had people, in this case all English speaking but from virtually every continent, and you got the richness of the synod. I think that was as important as possible.

I’ll take very seriously the Instrumentum Laboris and obviously any consultation that I continue to receive. My hope is in Louisville that I’ll have some opportunities for some focus groups.

In the general review you gave to the bishops about the synod consultation, you said something about how it revealed a need to look at how the bishops explain or teach the teachings of the church.

We live in a culture, especially in the United States, of heightened expectations. Every area we look at, there’s all kinds of expectations. So you’re right, no synod is going to be able to fulfill all the expectations that everyone has. I understand that.

But I think expectations do kind of alert us to interest. And that part I think is very good. I think what it means is that people will take an interest. Wouldn’t it be a shame if you had a synod document and it sat on a shelf? To me, I think this preparation is good.

I guess, theoretically there could be some downsides, that people will have such expectations they’ll be only disappointed. I don’t know.

But I think in general I would say it’s much more to the positive in seeing how we’re going to look to the challenges of the family in the light of the tradition of church teaching, how do we look at the contemporary challenges as Pope Francis is saying.

This is your first plenary meeting. What is your style of leadership? What unique traits do you bring to the conference in this role?

Well, I don’t know. I think that’s something that I’ll need to hear [from other bishops], what gifts [I bring]. I hope it’s one in which there is a clarity in presenting what the issues are. I hope there’s a listening that is present. And I hope also a certain discipline that allows us to move along in a way that is healthy. I think there is a need to move things along very well, but in a way that doesn’t stifle.

Many of the bishops said they found the homily at the Mass last night helpful and I thought that some of the things expressed -- that came from the readings of sacred scripture and the feast of Saint Barnabas -- I think they were priorities that I hope will come through in my own life.

Are there issues that you’ve seen that haven’t gotten enough attention by the conference, or maybe have been overlooked that you would like to prioritize?

I think I’ve been so concentrating with what’s on the horizon that’s probably a question I’m going to need to have a little bit more time to think about.

I’ve been looking though, as my homily last night said, at what does it mean for us to be instruments of encouragement to one another as bishops? Because I think the conference is not meant to take the place of leadership of bishops, it’s meant to support that leadership.

Just as a bishop’s leadership in a diocese is not meant to take the place of the leadership of the baptized faithful and the priests who are serving -- but it’s meant to inspire and be a catalyst.

My hope is that will come through as I look at the bishops. The other part that we spent some time on is the aspect of advocacy and public policy and by its very nature that horizon changes constantly. Just look at how it’s been changing day-to-day on immigration reform, for example.