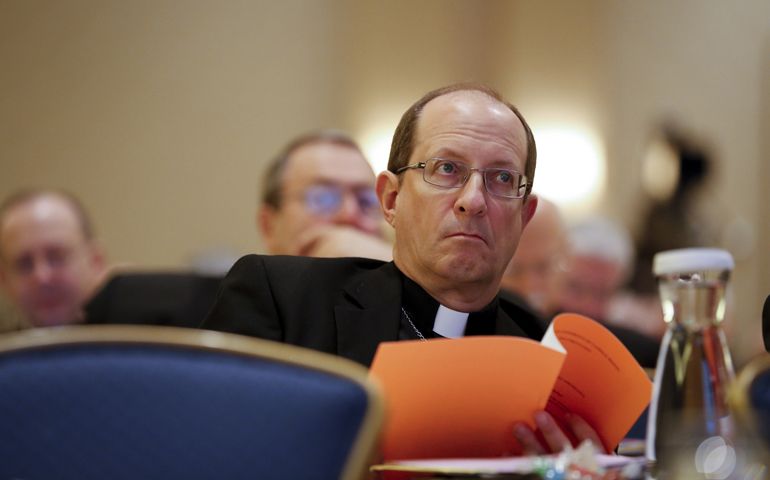 Baltimore — The U.S. bishops, in separate votes Tuesday, approved a budget for the year 2014 and a 3 percent increase in diocesan assessments starting in 2015.

The bishops also approved a proposal to modify that U.S. Conference of Catholic Bishops' bylaws to allow the chairman of its audit subcommittee to be chosen from among their overall membership rather than restrict the choice to those bishops currently serving on the USCCB Administrative Board, as has currently been the practice.

The 2014 budget that was presented to the bishops was "deemed to be more transparent than previous presentations," said a report by the USCCB Committee on Budget and Finance, which is chaired by Bishop Michael Bransfield of Wheeling-Charleston, W.Va., who also is USCCB treasurer.

As such, the 2014 budget was divided into three parts: restricted funds, so called because they are restricted to the donor's intent in giving the money; unrestricted funds, raised largely through diocesan assessments and used for priority activities and the work of the USCCB; and designated funds, reserved for the USCCB Communications Department, which provides services to external customers and for the USCCB internally.

"While the revenue earned by the Communications Department is not restricted by donor intent, the revenue is to be used to support the business of the office and is therefore identified as designated," the committee report said.

Restricted funds make up the overwhelming majority of the USCCB budget, with the amount approved for 2014 totaling more than $176 million. The amount includes about $73 million in U.S. government grants to the USCCB's Migration and Refugee Services office and $73 million more from several national collections. An additional $31 million in restricted funds comes from the annual Retirement Fund for Religious collection, of which the USCCB is but one of the organizations which share in the collection and disbursement of funds received.

Before the vote, Auxiliary Bishop Eduardo Nevares of Phoenix, noting the strong performance of the bishops' investment funds in the financial markets, said: "It seems that there are some surplus cash available from our investments in particular. I'm wondering if we might think of giving some of that money as a tithe to our brothers and sisters in the Philippines" in the wake of the destruction and loss of life caused by Super Typhoon Haiyan.

In response, Bransfield said "there really is no extra money," noting that following the budget vote, his next action would be asking the bishops to approve an increase of the diocesan assessment on behalf of the committee.

"We're drawing out some" of the funds in an effort to make sure the USCCB "is not cash poor and investment rich," he said.

While "the (bishops') conference has been successful in its investments," Bransfield added, "the costs of the conference are going up. ... So I do not believe there is surplus money. The conference will need it and additional monies in the future."

The assessment increase passed 132-42 with one abstention. A two-thirds approval of diocesan and eparchial bishops and their equivalent in law was required to pass the document, and the yes votes represented 76 percent of those cast.

The assessment is based on a formula that takes into account the registered Catholic households Catholic in each diocese, offertory receipts and the amount of contributions to three national collections.

Raising the assessment "will not close the gap between the assessment and the CPI," Bransfield said, but it "will continue to allow the conference to perform the necessary day-to-day operations."

The decision to cast a wider net among USCCB membership for the chairman of its audit subcommittee passed 203-11 with five abstentions. Two-thirds of bishops present and voting was required for passage.

"We really need a bishop with expertise who's going to be head of the audit subcommittee, and that's how we can get there," Bransfield said of the proposed change.

Cardinal Sean O'Malley of Boston wondered if such a bishop should be made a member of the Administrative Board once selected. "That's outside my payroll," Bransfield replied, but added that this bishop should be available to the board.

Archbishop Dennis Schnurr of Cincinnati said the reason for the present arrangement was Sarbanes-Oxley Act of 2002 "and the whole area of accountability." Sarbanes-Oxley, passed after accounting scandals at such firms as Enron, Tyco, WorldCom and Adelphia rattled investors and securities markets, increased the independence of outside auditors who review the accuracy of corporate financial statements, and increased the oversight role of boards of directors.

Continuing with the practice as it had been carried out over the last decade "has been very dangerous in the past," Bransfield said. "When a bishop is appointed (chairman of the audit subcommittee) and does not have the expertise ... we have had very confusing moments in the history of the conference," he added.

The difference between audit reports from past years and the present, according to Bransfield, is "phenomenal. The ones (audits) I walked into were the worst I'd ever read." Whoever heads the bishops' audit subcommittee must be able to understand auditors and finance reports, he added.