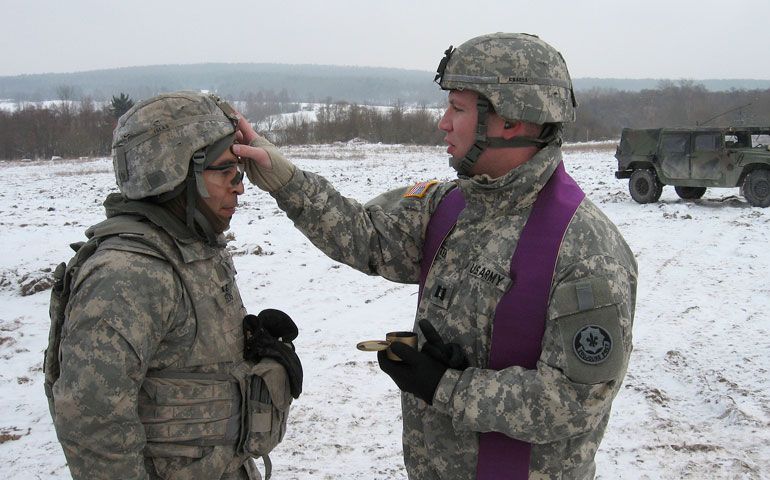 At its November 2012 general assembly, the U.S. Conference of Catholic Bishops approved by a majority vote "financial assistance to the Archdiocese for the Military Services in the form of a national collection to be taken up every three years proximate to Veteran's Day or a similar strategic date beginning in 2013." The vote was 123 yes, 42 no, with eight abstaining.

This collection is supposed to be taken up at the weekend liturgies Nov. 9 and 10. Our Sunday Visitor sent materials on the military archdiocese to every parish in the country. There was a letter to pastors and suggested bulletin announcements for the week before, the week of and the week after the collection. In addition, 250 envelopes and 250 full-sheet bulletin inserts have gone to every parish whether the bishop of the diocese voted yes or no. At least a few dioceses have decided to hold the collection on a "different strategic date." The diocese of Albany, N.Y., is skipping the collection this year, but Bishop Howard Hubbard, who voted for the collection, is giving a donation from the diocese.

This extraordinary collection is one sign that the spirit of militarism and nationalism has spread apace in our church, at least among our bishops. The Archdiocese for the Military Services must consider it a major coup. The idea may have originated with George Weigel, who wrote about it in his Dec. 8, 2010, column "The Catholic Difference." Weigel was a charter signatory of the Project for the New American Century, which anticipated the need for something like 9/11 that would serve as another Pearl Harbor and galvanize the country behind the neoconservative agenda. He has long understood how important Catholic support is for the multiple wars the project believed would have to be waged to maintain U.S. dominance in the world.

The military archdiocese would have wanted a weekend "proximate to Veteran's Day" in order to capitalize on "support the troops" sentiment, which has been an essential, mythical underpinning of U.S. war policies. The weekend was not chosen because Veteran's Day is also the feast of St. Martin of Tours on the Catholic calendar. This one-time soldier, beloved bishop and, later, patron saint of soldiers is, rather, an embarrassment for the archdiocese because his conversion to Christianity at a young age coincided with his refusal of further military service: "I am a soldier of Christ; it is not lawful for me to fight."

The archdiocese, on the other hand, does everything it can to assure young soldiers that carrying out the works of war is what Jesus would want them to do. Catholic military chaplains do not burden tender consciences with questions about the grisly things they encounter in war. They fulfill the role of "force multiplier" that the Pentagon has for them. Many soldiers would not be able to continue being efficient warriors without the spiritual support of chaplains who counsel obedience to commanding officers. More than 1,000 Catholic soldiers have died in the wars in Iraq and Afghanistan since 2001, but the archdiocese does not know their names. It is not responsible for funerals that take place at the home parish.

Despite its growing influence in the bishops' conference, the very existence of the military archdiocese hangs by the thread of the possibility of the existence of a just war. Amazingly, even when the bishops admitted the war with Iraq was unjust before the 2003 invasion, they did not cut that thread of just war. Most bishops quickly supported Catholic participation in the war to avoid even the appearance of being unpatriotic or not supportive of the troops.

Only one Catholic bishop who is an ordinary, Bishop John Botean of the Romanian Catholic diocese of Canton, Ohio, can be given credit for teaching his people the moral consequences of participating in an unjust war. In a pastoral letter read from every Romanian Catholic pulpit in the country, he wrote, "Beyond a reasonable doubt this war is morally incompatible with the Person and Way of Jesus Christ. With moral certainty I say to you it does not meet even the minimal standards of the Catholic just war theory. Thus, any killing associated with it is unjustified and, in consequence, unequivocally murder. Direct participation in this war is the moral equivalent of direct participation in an abortion. For the Catholics of the Eparchy of St. George, I hereby authoritatively state that such direct participation is intrinsically and gravely evil and therefore strictly forbidden."

Before Catholics respond to the appeal for money for the military archdiocese, they should consider how well it has preached the Gospel and applied our moral tradition to U.S. wars. The words of three popes provide a counternarrative to militarism in the church and illuminate the answers to these all-important questions:

"To attain the good of peace there must be a clear and conscious acknowledgment that violence is an unacceptable evil and that it never solves problems. 'Violence is a lie, for it goes against the truth of our faith, the truth of our humanity.' ... What is needed is a great effort to form consciences and to educate the younger generation to goodness [emphasis in original]." -- Message for the World Day for Peace, 2005

"A bishop's task is none other than this: to be a convincing witness to and a courageous teacher of the truth." -- "Ad limina" address to the U.S. bishops, 1998

"We must begin asking ourselves whether as things stand, with new weapons that cause destruction that goes well beyond the groups involved in the fight, it is still licit to allow that a 'just war' might exist." -- April 2003 interview with then Cardinal Joseph Ratzinger

"The truth is that it is impossible to interpret Jesus as violent. Violence is contrary to the kingdom of God. It is an instrument of the Antichrist. Violence never serves man, but dehumanizes him." -- Sunday Angelus address, March 11, 2012

"The word of the Gospel does not authorize the use of force to spread the faith. It is just the opposite: The true strength of the Christian is the power of truth and love, which leads to the renunciation of all violence. Faith and violence are incompatible." -- Sunday Angelus address, Aug. 18, 2013

"There can be no religious justification for violence in whatever way it manifests itself." -- Address to the International Meeting for Peace, Sept. 30, 2013

Many Catholic soldiers have experienced the truth of such words in a way that is anything but abstract. In his book Home From the War: Learning From Vietnam Veterans, Robert Jay Lifton wrote, "The veterans were trying to say that the only thing worse than being ordered by military authorities to participate in absurd evil is to have that evil rationalized and justified by guardians of the spirit. Chaplains … thus fulfill the function of helping men adjust to committing war crimes, while lending their authority to the overall project."

There is now no possibility of a U.S. war being just. The only role for a chaplain in an unjust war would be to urge refusal of orders to carry weapons or kill. The bishops should have been debating how to dissolve the 28-year-old Archdiocese for the Military Services, not extraordinary ways to fund it.

[Mark Scibilia-Carver is an arborist and a member of the Ithaca, N.Y., Catholic Worker community.]