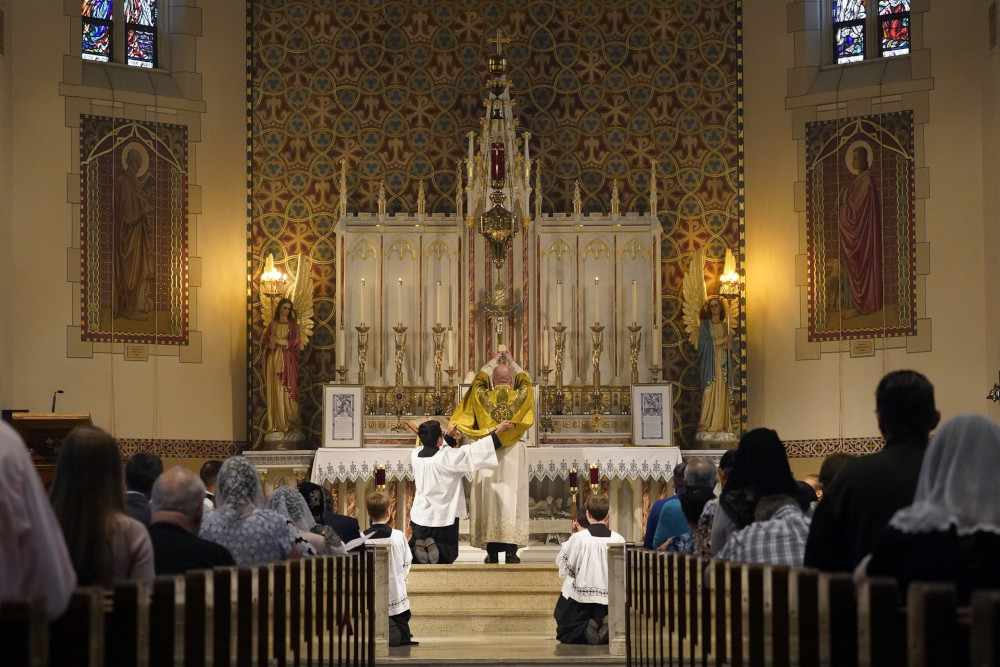 A priest elevates the Eucharist during a traditional Tridentine-rite Mass in July 2021 at St. Josaphat Church in the Queens borough of New York City. (CNS photo/Gregory A. Shemitz)

Cardinal Wilton D. Gregory of Washington promulgated liturgical norms July 22 for implementing Pope Francis' apostolic letter "Traditionis Custodes" ("Guardians of the Tradition"), which limits celebrations of the Mass according to the rite used before the Second Vatican Council.

Effective Sept. 21, celebration of the Mass according to the 1962 Roman Missal can take place on Sundays in three nonparochial churches in the archdiocese: Chapel of St. John the Evangelist Parish in Forest Glen, Maryland; the Franciscan Monastery of the Holy Land in Washington; and St. Dominic Mission Church in Aquasco, Maryland.

Gregory, in a letter to priests serving in the archdiocese, said that "it is clear that the Holy Father's sincere intention is to bring about greater unity in the church through the celebration of the Mass and sacraments" according to St. Paul VI's 1970 Roman Missal, "which was the fruit of the renewal in the liturgy" called for by Vatican II.

The pope's apostolic letter, promulgated July 16, 2021, contains a set of norms for the celebration of what is popularly known as the "traditional Latin Mass" or "Tridentine Mass" -- drawn from the 1962 Roman Missal.

On the day the pope issued the document, Gregory said in a statement that he would prayerfully reflect on the apostolic letter and carefully consider how the pontiff's intentions would be implemented in Archdiocese of Washington.

As of Sept. 21 -- the feast day of St. Matthew the Apostle, the archdiocese's patron saint -- all priests, deacons and instituted ministers need to request in writing and receive permission from Washington's archbishop to celebrate the Eucharist using 1962 Roman Missal either privately or publicly in the territory of the archdiocese.

Quoting "Traditionis Custodes," the archdiocesan norms state that clergy and ministers making this request must affirm in writing "the validity and legitimacy of the liturgical reform dictated by" Vatican II and the magisterium "of the supreme pontiffs."

Gregory noted in the archdiocesan norms that Francis issued "Traditionis Custodes" "motu proprio," or on his own initiative, "as a means of encouragement and to bring harmony to the celebration of the Mass" in the church's Latin-rite "so that together we may with one accord glorify God."

The pope's apostolic letter, he said, restored celebration of the Mass according to the liturgical books promulgated by St. Paul VI and St. John Paul II "and declared that these reformed liturgical books guarantee the fidelity" of the Vatican II reform.

In his letter to priests, Gregory noted that he had formed a working group to assist him with implementing "Traditionis Custodes," and in the recent archdiocesan listening sessions for the 2023 Synod of Bishops on synodality, the faithful offered their input about the Mass according to the liturgical books issued before 1970.

A plea expressed in the listening sessions was that Mass celebrated according to the 1962 Roman Missal "continue to be provided for in our archdiocese," he said.

"In the time I have served as archbishop of Washington, I have discovered that the majority of the faithful who participate in these liturgical celebrations in the Archdiocese of Washington are sincere, faith-filled and well-meaning," the cardinal said.

"Likewise, the majority of priests who celebrate these liturgies are doing their very best to respond pastorally to the needs of the faithful," he added.

He named Msgr. Charles Pope, pastor of Holy Comforter-St. Cyprian Parish in Washington, to act as his delegate in the pastoral care of faithful who wish to celebrate the Eucharist using the 1962 Missal.

The delegate will serve as a moderator of all the clergy and instituted ministers who have received permission to celebrate that Mass.

Gregory said that as the norms for "Traditionis Custodes" are implemented in the archdiocese, "please be assured of my constant prayers for the faithful who share a deep devotion to the celebration of the Mass" using the 1962 missal.

According to the archdiocesan norms, all celebrations of Mass on Christmas, the Triduum, Easter and Pentecost Sunday "are to use exclusively" the liturgical books promulgated by Sts. Paul and John Paul, "either in the vernacular or in Latin."

"If permission is granted to celebrate the Eucharist according to the Roman Missal of 1962," the norms state, "the Scripture readings must be proclaimed in the vernacular," using the official translation recognized by the U.S. Conference of Catholic Bishops, "and the homily is to reflect the norms and directions for preaching indicated by the Second Vatican Council and post-conciliar documents."

In addition, the norms also require that all other sacraments be celebrated using the liturgical books promulgated by Sts. Paul and John Paul. "These rites may be celebrated in Latin," the norms said.

"The intention of these requirements," Gregory wrote, "is to foster and make manifest the unity of this local church, as well as to provide all Catholics in the archdiocese an opportunity to offer a concrete manifestation of the acceptance of the teaching of the Second Vatican Council and its liturgical books."

The norms will be reviewed in three years.