Casting the net for potential priests 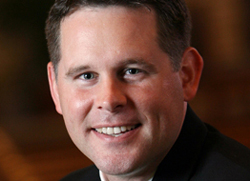 Most Catholics are all too aware that vocations to the diocesan priesthood are dwindling to a precious few. There simply aren’t sufficient priests for the ministries at hand, and their replacements are in short supply -- and, in some instances, nonexistent. Young men are not coming forward to inquire about entering the seminary.

The vocations directors’ lament is: Where are they?

Two people say they know, and for a fee, will locate them, and provide a book to walk prospective candidates through the entire process of discernment prior to entering the seminary and seeking ordination.

Sam Alzheimer, a former seminarian, now president of Vianney Vocations, and Fr. Brett Brannen first worked together more than a decade ago in the Savannah, Ga., diocesan vocations office. In one year they increased the number of candidates from five to 28.

The attrition rate from seminaries is extremely high. In 1965 the U.S. diocesan seminary system had 8,325 graduate-level seminarians. Today, 3,357. That’s almost two-thirds fewer seminarians in a church almost a third larger than it was 45 years ago. The attrition rate has held steady for the last decade and a half or so: More than 3,000 seminarians enroll annually, and around 430 to 470 achieve ordination.

What Alzheimer and Brannen claim to do is increase the numbers entering the seminary.

When Alzheimer left Savannah, he developed a successful stewardship/ fundraising career, but had a nagging sense that more could be done to increase the number of candidates to the diocesan priesthood. Brannen became vice rector of Mount St. Mary’s Seminary in Emmitsburg, Md., where he searched for a single source on following the path to the priesthood.

He could not find one, but “the Holy Spirit was nudging me to write one,” he said. In 2008, he began to write a chapter a month until he had completed a first draft.

In 2009, Alzheimer called Brannen to discuss a new direction he wanted to take in his life. Despite advice to keep his day job, Alzheimer knew he had to quit and dedicate his full energies to Vianney Vocations.

“Sam has incredible talents to see an issue and to develop a business plan to address this issue,” said Brannen. In that same conversation, Brannen mentioned he’d completed a manuscript and needed a publisher. They decided to renew their earlier collaboration: Alzheimer would publish the book and Brannen would help where he could in Vianney Vocations.

Brannen’s To Save A Thousand Souls: A Guide to Discerning a Vocation to Diocesan Priesthood was published by Vianney Vocations in 2009. “The Holy Spirit did 99 percent of the work,” said Brannen.

For Alzheimer the key is to plumb existing diocesan and parish data to find certain facts: the historic priest-to-parishioner ratio, the current needs and new names of men 18-35 years of age. “Every parish has census software and data, which includes birth dates, sacramental and other information,” said Alzheimer. With an “attrition rate of seminarians anywhere from 40 to 60 percent,” he said, “a diocese needs to recruit larger numbers of candidates because a large number will drop out of the seminary.”

Vianney Vocations employs a multimedia approach. “We use e-mail to get additional names of potential candidates by asking pastors, priests, deacons, youth ministers, Knights of Columbus members and the like,” said Alzheimer. He uses Facebook to attract new names. Bulletin inserts encourage laypeople to submit names. Vocation awareness newsletters and prayer cards are made available to dioceses and parishes.

“We do not take a high pressure approach at all, but we do cast the net as wide as we can,” said Alzheimer. Most important, he said, is that each diocese determines the qualities and characteristics it requires for candidates to the priesthood. The cost of Alzheimer’s services range from several hundred to a few thousand dollars a month, depending on the needs.

Does all this effort actually work?

“Yes,” said Deacon Joe Cahill of the Charleston, S.C., vocations office. Charleston has 200,000 Catholics, 92 parishes, 152 priests, 101 deacons, 26 religious brothers, 137 sisters. “Vianney Vocations strategies in the past few months generated 14 men for a discernment retreat,” said Cahill. In the past only a handful attended.

“For a small diocese like ours, Vianney Vocations provides a lot of necessary background work,” said Bishop Michael Duca of Shreveport, La., which has some 40,000 Catholics. “Vianney Vocations sets the stage for our vocation director and team to do their work.” In the short time that Alzheimer has been working with Shreveport, more than 1,000 names have been identified. “It will take a few years for this work to bear fruit, but Vianney Vocations is an excellent resource for us,” said Duca.

Practical ideas for discerning a vocation

One of Fr. Brett Brannen’s mantras is “God can’t drive a parked car. Move!” By this he means that discerning a vocation takes action. Here are some of his recommendations for men considering the priesthood: