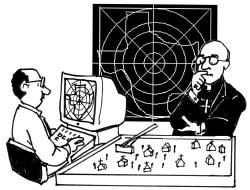 So few priests. So many parishes. What's a bishop to do? This question may rightly belong in a Sunday New York Times' crossword puzzle, but it's real and it's at the center of long-term planning in dioceses around the country. It becomes more complicated when priests' language skills are a key factor in parish assignments. Some dioceses, for example, have parishes that are predominantly Spanish-speaking, but there are not enough Spanish-speaking priests to cover the parishes.

What's the answer to this far-reaching question?

One man had an idea. Les Maiman, then chancellor and fiscal officer for the San Angelo diocese in west Texas, asked himself: What if we built an optimization tool that could create priest assignment models in an objective manner?

With this idea in mind, Maiman called upon James Dyer, a professor he got to know while getting his master's in business administration at the McCombs School of Business at the University of Texas at Austin. Dyer in turn engaged his colleagues, John Butler and Leon Lasdon. This brain trust created a powerful process tool called "decision-support system" (DSS).

"Jim, John and Leon provided the candlepower and did all the heavy lifting, while my contribution was to facilitate the needs and terms of the diocese's ecclesial/pastoral environment," said Maiman, who now serves as executive director of the San Angelo-based Diocesan Fiscal Management Conference.

The San Angelo diocese was used as the guinea pig for the system. The diocese encompasses almost 38,000 square miles, the approximate size of the state of Ohio. Its 72 parishes range from 7 to 2,000 families and it has a total Catholic population of 84,000. When the project began, the staffing plan projected that 40 priests would be available to provide services in these 72 parishes. Of these 40 available priests, 28 are bilingual and the remaining 12 are English-only.

The objective of DSS is to support long-range diocesan planning with a focus on the impact of a decreasing number of available priests and with changes in the mix of languages that the available priests speak, according to a technical paper written by these experts (published by Interfaces, March 2009).

The heart of the software is a mixed-integer programming optimization model. This is a complicated topic. In short, DSS analyzes a lot of data such as total number of available priests, the number of years they are available, the languages they speak, the number of Spanish-only, English-only and bilingual parishes, travel distances between parishes and the number of sacraments needed at the parishes.

Church law and diocesan policies specify minimum and maximum number of services to be held in each parish on a weekend.

With this and other data, the system creates different scenarios about future priest assignments, who should serve what parishes or cluster of parishes, for how long and when.

According to Dyer, "My colleagues and I were interested in applying modeling techniques to a unique problem." By the way, none of the professors is even Catholic.

The popular Microsoft spreadsheet software, Excel, was used as the gateway into and out of the optimization model. Butler created the Excel interface and Lasdon wrote the optimization code.

Maiman points out "that DSS is not a policy or ecclesiology and does not mean that the priesthood is somehow reducible to sacramental optimization. Rather, DSS is an extraordinary 'what if' tool, a process that opens up different combinations."

The cost to develop this prototype software was minimal. There were no licensing fees to use the software, General Algebraic Modeling System, because the company (GAMS Development Corporation) waived the fees because of the unique nature of the project. The professors donated their research time.

San Angelo's bishop, Oblate Michael Pfeifer, and some priests were given a thorough demonstration of the optimization tool. Afterward Pfeifer wrote to the development team.

"While I doubt that many of us [the bishop and diocesan priests] fully appreciate what is going on under the hood, we clearly do see and appreciate how this tool is enhancing both our pastoral decision-making process itself and the resultant quality of such planning," said Pfeifer.

The bishop emphasized that this tool offers three key dimensions. First, it provides "a fresh and objective first look at priest deployment alternatives, [which goes a] long way towards truncating the understandable concerns of parishioners and priests alike for the interests of particular parishes." Second, "critical to our decision-making is understanding the priest supply system." Third, "knowledge, of course, immediately leads to an enhanced ability to offer an informed pastoral response," said Pfeifer.

The DSS was created with specific variables in mind, those of the San Angelo diocese. The optimization tool is not available "off the shelf." However, if a diocese wanted to use it, they could, says Maiman. "The optimization process is proven and it would still need to be adjusted to reflect specific diocesan variables," he said.

Said Dyer, "It was a rewarding experience for us and an area where we had not worked before."

Tom Gallagher is a regular contributor to NCR. Ideas for a "Mission Management" story? Contact him at tom@tomgallagheronline.com.

Online resources
For those interested in reading the research paper, visit interfaces.journal.informs.org/cgi/reprint/39/2/133. Les Maiman can be contacted at Diocesan Fiscal Management Conference at LesMaiman@dfmconf.org.

Battle lines in the liturgy wars