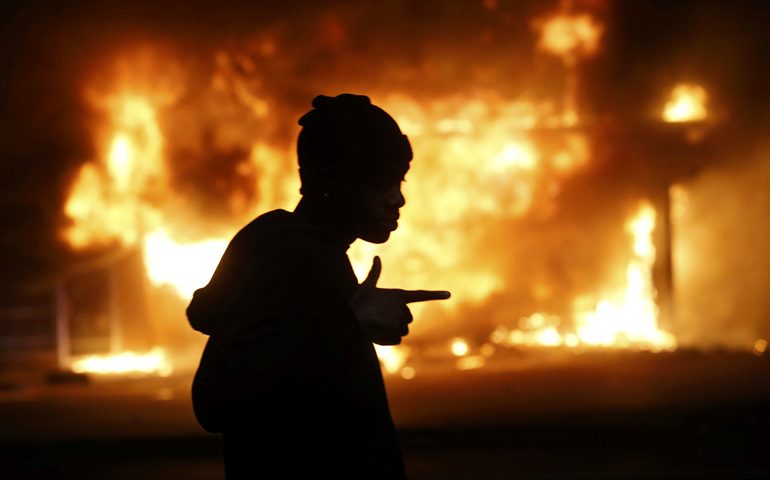 A man walks past a burning building during rioting Monday in Ferguson, Mo., after a grand jury returned no indictment in the Aug. 9 shooting death of Michael Brown in the St. Louis suburb. (CNS/Reuters/Jim Young)

Like so many others Monday night, the congregants at West Side Missionary Baptist Church were glued to televisions as a grand jury decision in the Michael Brown case was announced.

One woman sobbed in her chair as she learned that police Officer Darren Wilson would not be indicted in the fatal shooting.

Then, with the press conference far from over, the church's television went dark. And the congregants at the church turned instead to prayer and preaching.

Within seconds, the Rev. Starsky Wilson was at the pulpit, calling for "contrary folk."

"Thank God for people who go against the teachings of the church," Wilson said, while referencing those who had told the Rev. Martin Luther King Jr. that he was moving too fast on civil rights issues. "Thank God for contrary young people.

"To be contrary is to say we've had enough."

Wilson was named by Missouri Gov. Jay Nixon as a co-chair of the 16-member Ferguson Commission to look for a way forward after Brown's death.

On Monday evening, he said that despite the failure of the system to indict Wilson, the road ahead was not impossible. "God through faith turns curses into blessings," Wilson said. "Ordinary people with extraordinary faith can change the world."

The Rev. C. Jessel Strong, president of the St. Louis Metropolitan Clergy Coalition, also took the pulpit. "We're here because we're sick and tired," Strong said. "Why does it seem all of our children are shot by the police?"

At the same hour, St. Louis Archbishop Robert Carlson gathered for prayer at Blessed Teresa of Calcutta Roman Catholic Church in Ferguson. Later, he issued a statement calling for calm.

"I implore each of you: Choose peace! Reject any false and empty hope that violence will solve problems," the archbishop wrote. "Violence only creates more violence. Let's work for a better, stronger, more holy community -- one founded upon respect for each other, respect for life, and our shared responsibility for the common good."

On Monday afternoon, Interfaith Partnership, which represents 24 faith traditions in the St. Louis region, issued a statement calling for peace and understanding. "As we seek meaningful change and healing, we pray for understanding of the pain of others," read the statement, signed by Carlson and Strong, of the African Methodist Episcopal Church.

In recent days, numerous clergy members have said they will open their worship spaces to serve as safe houses and sanctuaries.

As the grand jury announcement approached Monday night, worshippers at Christ Church Episcopal Cathedral downtown sat quietly. There was no broadcast of the press conference. Those listening on their smartphones were asked to use headphones.

When the Rev. Mike Kinman announced the decision, one person at the back of the cathedral shouted a mournful cry and was escorted out by friends. Others in the congregation, including social worker therapist Celeste Smith, covered their faces as if in grief. Smith, who is white, listened to the announcement with Claudine Allen, also a counselor, who is black.

As planned, all fell silent then for four and a half minutes. Kinman read a prayer of forgiveness written by Anglican Archbishop Desmond Tutu, and all sang "Lift Every Voice and Sing," considered the African-American national anthem.

Then began a 24-hour vigil of prayer and song that would continue all night and day at the cathedral.

Kinman had sent out a notice to the community in advance announcing that people could gather at the cathedral for group prayer, song and silent prayer. He wrote: "Be not afraid. Be prayerful. Be bold. Be together."