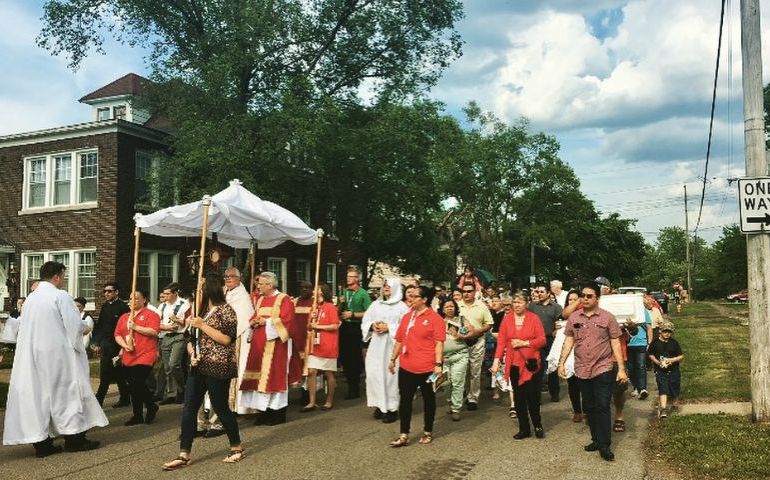 Hundreds march in a Eucharistic procession on June 4 in Gary, Indiana, following the closing synod Mass. (Courtesy of Gary Diocese)

Mentioning the city of Gary, Indiana tends to evoke an image of dilapidated buildings, unemployment and crime. Following the steady decline of the steel industry in the late 20th century, Gary's population faced dramatic reductions. At its peak in 1960, Gary had almost 180,000 people. Now, U.S. Census estimates place the population at 76,424.

Those numbers weighed on Gary Bishop Donald Hying's mind when initially proposing the synod.
"We have significant poverty here in our diocese. … That's something that's on everyone's hearts as well," Hying told NCR. "[The synod] will benefit not only the church but also the world as we live the mission of Christ."

Hying, who was appointed bishop by Pope Francis in November 2014, spent his first year visiting all 69 parishes within the diocese. On Feb. 25, 2016, after getting a feel for the needs of each parish, Hying released a pastoral letter "Go, therefore and make disciples of all nations." In the letter, he described his travels throughout the diocese and announced the diocese's first-ever synod.

"In my travels around the diocese, meeting thousands of people … I have served the Lord alongside you. I have prayed for and with you. I can honestly say that I have fallen in love with you and this diocese," Hying wrote in his pastoral letter.

Following the letter's release, Hying hired Deacon Robert Marben as synod coordinator and assembled a synod commission, which oversaw the next year and a half of work, culminating June 2-4, Pentecost weekend.

Although the synod consisted of roughly 320 voting delegates, according to Marben, efforts were made to include the entirety of the diocese. In October 2016, every parish held a listening session where parishioners were invited to discuss the eight ecclesial mission areas. Hying reports that over 12,000 data points were collected from those sessions. Additionally, each parish was asked to select a parishioner to represent each ecclesial mission area at the deanery sessions held in February. Results from the listening and deanery sessions were used to create the initiatives delegates voted on June 3.

Hying said that the response from the diocese has been "remarkably enthusiastic" throughout the process. 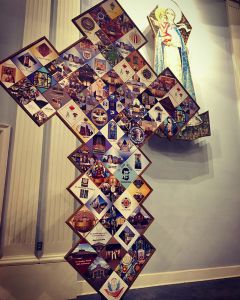 A cross made up of tiles representing each parish in the Diocese of Gary was assembled during the opening Mass for the synod June 2 in Michigan City, Indiana. (Bob Wellinski/Northwest Indiana Catholic)

One of the highlights for delegates and leaders alike was the closing Mass on June 4. The Mass included a Eucharistic procession from downtown Gary's convention center to the Cathedral of Holy Angels. Victoria Hathaway, a member of the synod commission, said that although much of downtown Gary "has turned into disrepair," the procession and the church "weren't going to shy away from that."

"We weren't going to say we want to go just on the developed part or the parts that still have people in it," Hathaway said. "We're going to go into every aspect that we can, and I think that hopefully sends a big message that we're here and we're going to help serve [Gary] because you're part of our diocese as well."

Hathaway is already active in youth and young adult ministry in the diocese but was happy to see that more people wanted younger generations involved in other ministries.

"What I'm hoping is going to come from [the synod] is more young leaders are going to be called up to take action," Hathaway said. "I think our task is now to reach out to other young Catholics and other young people and saying, 'You know, you are really called to help out in your parish, you're really called to lead this in your parish.' I think it's going to be a really great thing."

Stacia Bolakowski, a synod voting delegate who represented the high school where she teaches, agreed with Hathaway's assessment. Bolakowski also noted the overwhelming agreement in the social teaching category.

Garnering 61 percent of the votes in the social teaching category — the highest percentage during the voting process — the initiative aims to "educate and evangelize people on Catholic social teaching." It continues, saying social justice is "essential to living our faith life with authenticity and fidelity to the Gospel of Jesus."

Bolakowski says that although the diocese is already actively involved in social justice activities, the vote indicates the diocese still "needs to do more."

"We still need to get the message out, that our faith is about helping others and being more open to the concept of helping those who are marginalized," Bolakowski said.

Although the synod weekend has wrapped, for Hying the work continues. This summer he will start preparing his pastoral letter on the synod results. Hying notes that the letter is a jumping off point — each parish will be responsible for creating their own implementation plan.

"The idea is that not everybody is going to do the same thing in the same way. There's no uniform plan coming down from the top, but it's rather, 'Here's a smorgasbord of options, initiatives, best practices; work with four or five of those, create your own plan and the diocese will help you to succeed,' " Hying said.

To assist parishes carry out their chosen initiatives, Hying will create an implementation commission. Marben also reports that in 2018 Hying will again be making the rounds to every parish in the diocese to assess how the roll out of each plan is going.

Hying acknowledges that the results are "a process, it's not instant."

"But I truly believe it's a deliberative step forward that's going to give us both the base and the inspiration to really move the mission of the church in a more dynamic way into the future."

[Kristen Whitney Daniels is a NCR Bertelsen intern. Her email address is kdaniels@ncronline.org.]