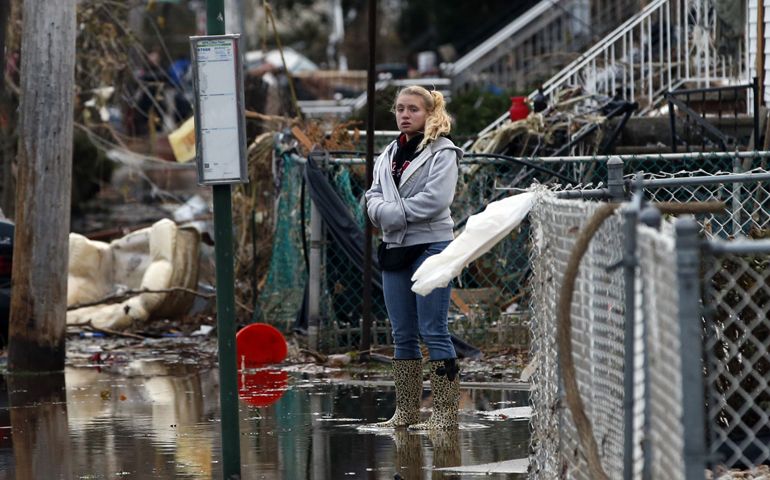 A woman stands alone in water in front of homes in the Staten Island borough of New York that were heavily damaged or destroyed by flooding caused by Hurricane Sandy. (CNS/Reuters/Mike Segar)
This article appears in the Hurricane Sandy feature series. View the full series.

New York — The world didn't need reminding that the New York area would get up and brush itself off from Hurricane Sandy. New Yorkers certainly didn't need to be told, and met the disaster's challenges and terrors with typical grit, grace and fortitude.

But Sandy, which hit Oct. 29, made the city feel different. The ability to meet adversity head-on is a shared and cherished civic characteristic. Yet after a decade in which New York has experienced the trauma of 9/11, a late-summer power outage in 2003 that lasted several days for many residents, and then two successive years of hurricanes (Irene occurred last year), it was hardly a surprise that newspaper headlines and Twitter feeds screamed, "Enough already!"

It was as if the city was physically tired -- kicked in the gut -- and wanted some other locale to take the brunt of things next time. (I had actually heard similar complaints in one other locale where I have worked as a journalist and humanitarian worker: Haiti.)

For those who lived through it, that was a forgivable thought, born as it was from unlucky circumstances. For days, the city had a new definition of haves and have-nots, based on the vagaries of geography: those who had electrical power and those who didn't.

Walking around lower Manhattan in the dark, as I did one night, without a flashlight, was a startling experience. In some ways it was like being in the Haitian capital of Port-au-Prince, post-earthquake and shorn of lights. Silence descended on what looked like an abandoned city.

For those who lived in the affected areas, the reality was far more somber, given the experiences of days and nights without power, food spoiling, dropping temperatures and the isolation caused by a stalled subway system.

When I visited the Church of St. Joseph in Greenwich Village on Nov. 4, the first Sunday after power was restored in many areas, some of the parish members looked like they needed real solace.

Dominican Fr. Gabriel Gillen, who was raised in Rockaway Beach in Queens (one of the worst-hit areas), said in his homily that the sacred mysteries of events like Sandy remain unknowable but that God wants humanity to "get to a place of [spiritual] safety."

Getting to a place of physical safety was hard enough. Sandy revealed fissures that may linger longer than anything brought by 9/11, the event it was most compared to. If 9/11 was like a concentric circle -- an event with a physical core whose effects moved outward, affecting families, institutions and the psychic fabric of the city's life -- Sandy was like a series of overlapping concentric circles, both expanding outward and affecting multiple areas and layers (transportation, infrastructure) of the city simultaneously.

No one of course, can compare the sheer shock and loss of life of 9/11 to Sandy, which the city had time to prepare for. Yet as a shared physical event, Sandy was felt keenly by all New Yorkers in some way. "There are simply so many more families affected," my Church World Service colleague Joann Hale said about the 9/11 and Sandy contrast.

The worst, of course, came to those sections of the city (coastal areas of Brooklyn, Queens and Staten Island) already vulnerable to the increasing uncertainties of the Atlantic Ocean; more than a week later, the residents of such areas were still in shock, with some people, I am told, arming themselves to keep potential looters at bay.

Many parts of the city, thankfully, were spared. The Astoria section of Queens where I live was lucky. Most of us never lost power, but I had friends in Manhattan and in New Jersey and the northern suburbs who lost power for upward of 10 days.

And parts of the city, Long Island and New Jersey still remain without power. The Rev. Tom Goodhue, who heads the Long Island Council of Churches, told me Tuesday -- more than two weeks after the event -- that thousands remain without the basics of electricity and heat. "There is going to be a need for blankets for weeks," he said.

That was a reminder that the power of even a Category 1 hurricane is not to be taken lightly. In a popular Astoria park overlooking the East River, it looked as if a Cyclops had come by and swept several enormous trees away with the back of a hand.

Of course, in ways that mattered, chaos was kept at a distance, despite impatience, frayed nerves and real frustrations. A close friend who lives in lower Manhattan spoke of neighbors bonding together, sharing food and enjoying cold dinners over candlelight.

New York Cardinal Timothy Dolan recalled visiting a shelter on All Saints Day and being told by a shelter resident that there were a lot of saints there, "folding blankets or handing out sandwiches."

Dolan wrote on his blog: Sandy "brought out the best in New York ... And once again, we confirmed what's most important to us: life itself, faith, family, friends and community."

True enough, but hard times are ahead in New York and New Jersey. The cost of rebuilding and repair is already in the tens of billions. Gov. Andrew Cuomo will seek $30 billion in federal assistance to do so, but where such a proposal goes in the midst of an uncertain political climate is anyone's guess.

While the Obama administration has made the response to Sandy a priority (winning well-publicized kudos from New Jersey Republican Gov. Chris Christie), it is also a fact that federal aid to disaster survivors has always been limited -- no more, in most cases, in the range of about $30,000 to $35,000 for those qualify.

"You're not going to replace a home in New York or New Jersey on that amount," Hale said. As an emergency response specialist who has worked on a number of large-scale emergencies, including 9/11, Hale said, "It's hard for me to get my head wrapped around that, and I work with disasters all the time. To me it means there is going to need to be a lot of spiritual and psychological support [for survivors]."

Humanitarian agencies from a broad spectrum -- Catholic, Protestant, Jewish, secular -- will in coming weeks identify those made most vulnerable by the disaster. Among them: undocumented workers both within the city and on Long Island. Others are those who live in the city and, like the elderly or those who suffer from mental illness, were already vulnerable before the disaster.

"We've got large populations of vulnerable people already. In a small town, a tornado hits and you can move in with your neighbor," Hale told me. "But in New York, that's harder to do. You're already living in a two-bedroom apartment with five other people."

That is looking at the problems within the city. Looking outward, toward the ocean's edge, and seeing more threats, many are concerned that disasters like Sandy could become yearly events. The New Yorker magazine memorably played on a famous James Baldwin title and worried out loud about "The Storm Next Time" -- that New York and surrounding areas face more catastrophic events ahead in the face of rising waters and a changing climate.

An excellent and extensive examination of land-use decisions and policies conducted by several Huffington Post reporters laid out some uncomfortable conclusions as to why: "Authorities in New York and New Jersey simply allowed heavy development of at-risk coastal areas to continue largely unabated in recent decades, even as the potential for a massive storm surge in the region became increasingly clear," they wrote.

"In the end, a pell-mell, decades-long rush to throw up housing and businesses along fragile and vulnerable coastlines trumped commonsense concerns about the wisdom of placing hundreds of thousands of closely huddled people in the path of potential cataclysms."

Have we seen the end to such disasters? Don't bet on it.

"Don't forget," a colleague told me. "This was only a Category 1 hurricane."

[Chris Herlinger, a writer for the humanitarian agency Church World Service, is a New York-based freelance journalist who is a frequent contributor to NCR.]