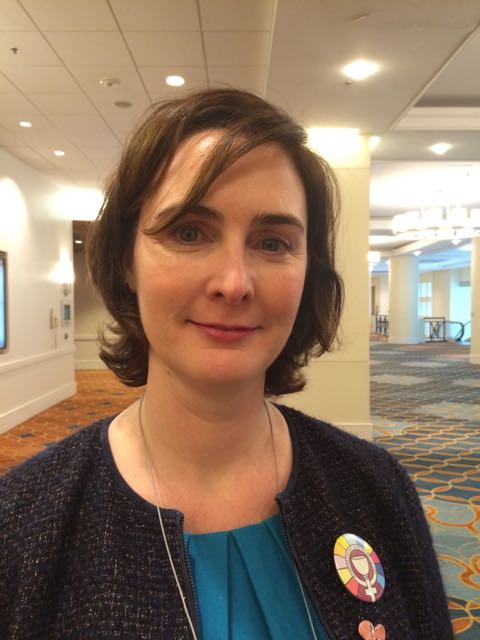 Organizers and delegates to the third international women’s ordination conference, finishing a three-day conference here, said they were leaving with a renewed energy and purpose.

This was the third time women ordination advocates had met. Women’s Ordination Worldwide (WOW), which traces itself to 1996, held two previous international conferences, one in June 2001 in Dublin, Ireland, the other in July 2005 in Ottawa, Canada. This WOW conference was sponsored by the U.S.-based Women’s Ordination Conference, which dates its history back to 1975.

The theme of this year’s gathering was “Gender, Gospel and Global Justice.” Conspicuously were the words “women’s ordination.” One reason is feminists disagree on ordination strategies, even on the question of whether women should seek ordination into a church with a hierarchical structure. These church critics view hierarchy as antithetical to the gospels and, as currently managed, an instrument of power and exclusion.

However, the deeper reason for the missing words is many women who gathered here see ordination as only a part of a much larger injustice, which, they say, plagues the church and remains rampant in societies around the world -- discrimination based solely on gender. It was this perceived injustice that bonded the women who came here.

“As long as we are passively accepting the misogyny of the church we are condoning it,” said Miriam Duignan, WOW executive director and one of the conference organizers. “People really do need to feel this is something they should be talking about or they are tacitly agreeing to this discrimination. We need to get the message out into the parishes.”

Duignan spoke to NCR as the last general session was wrapping up.

“So many people have said they feel they’ve had a conversion experience during this gathering,” she said, adding the conference had been a source of new energy.

Duignan’s assessment was echoed in various ways by other delegates.

Said Virginia Saldhana, a writer and former executive secretary of the Federation of Asian Bishops’ Office of the Laity, who had come from Mumbai, India to participate in the gathering: “I feel very energized and more supported.”

Lorreto Sr. Jeannine Gramick, an advocate for lesbian, gay, bisexual, and transgender rights and co-founder of New Ways Ministry, which counsels gay Catholics, also spoke of the new energy she felt. “There is an overcurrent of energy here. It is revivifying and giving us hope to go into the future. There are a lot of positive feelings here.”

Some talked about having a “conversion experience” during the conference, Duignan said an Italian man came over to her and said he thinks differently now about what the women are saying regarding women’s ordination. He gets it in his gut now.

“I always thought it was wrong we didn’t have women priests,” Duignan quoted the man as saying, adding he went on to say, “but now I really feel this to be an emotional heartfelt problem. I see that the impact it [not having women priests] is having and the message it sends. This has real consequences.”

Schenk said she was taken by the diversity she found at the gathering.

She said conference topics were equally diverse. “There was everything from [gender] complementarity -- something that doesn’t work for women -- to a whole in depth look at visuals of God. And there were practical strategies like what to do if we feel we have a call to be ordained.”

She said many different types of women came to the gathering. She said she met parish ministers, “here under cover,” ordained women “who are leading pretty large faith communities” as well as theologians to educators. “And there were many middle age and young women too. I was amazed and delighted.”

Said Schenk, who is writing a book about archeological finds that support the idea that women had priestly ministerial roles in the early church, “Yet despite all the varied ideas we have on ordination the one thing that united all of us is the recognition that being female makes us automatically subordinate in every part of the world.”

But it wasn’t diversity that moved Schenk most, she said. Rather it was the way the women were imagining and speaking about God.

“I experienced this weekend the beauty of imaging Sophia God Wisdom Spirit within a Eucharistic context that I had never experienced before, she said. “It makes me realize how important the work that all of these women are doing in their different venues.”

She added: "It’s not just women who need this Wisdom Spirit God integrated into prayer. It is everyone because there’s a wholeness that emerges from it. It sort of carries a certain element of mystery.”

While many of the women were quick to speak in lofty terms about what the conference achieved, there were worries as well. Duignan said, despite newfound enthusiasm, she has concerns.

“The official church spends a lot of money telling people why women cannot be priests,” she said, before asking: “Is discussion banned only when you support women’s ordination?”

“WOC has a great future,” she said, “if we all pitch in and give it our best. It needs financial support. It needs support from younger people.” Looking ahead, she said she is modestly confident ordination advocates will find the necessary resources.