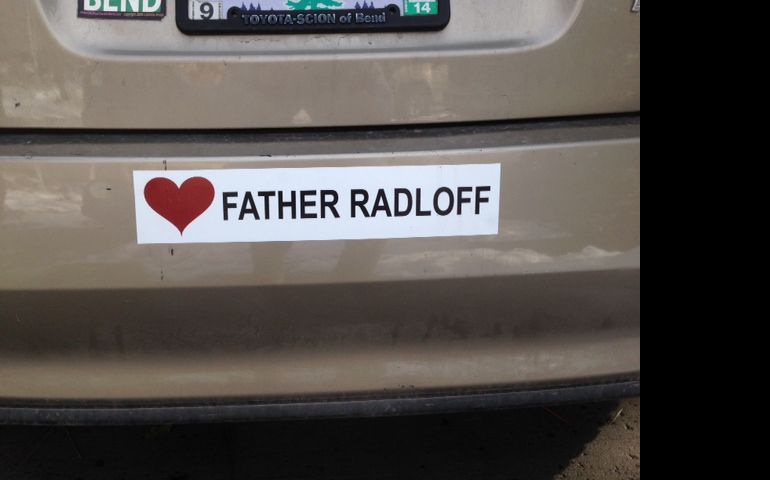 Reacting to the Vatican's denial of Fr. James Radloff's appeal to his removal, some parishioners at St. Francis of Assisi Church in Bend, Ore., feel a sense of relief the issue has been put to bed while others express anger and frustration at the outcome.

Made public Friday, the Congregation for Clergy's ruling, which backs Baker, Ore., Bishop Liam Cary's formal Oct. 1 ousting of Radloff, leaves the priest's ministerial future in the hands of the bishop.

In a letter read at St. Francis of Assisi Masses over the weekend, Cary told parishioners the congregation "issued a decree upholding my decision of Oct. 1st, 2013, to provide new pastoral leadership for the parish" and that "at present no decisions have been made regarding Father Radloff's next assignment to priestly ministry. This is a matter that I will be addressing with Father Radloff in the near future."

In the brief statement, Cary also said the congregation had "upheld my determination not to make public the reasons for this decision in order to protect the right to privacy of all involved parties."

In his appeal, Radloff had asked that the reasons Cary put forth for the pastoral removal be made public.

Cary has refused to discuss the reasons, writing that he was "not at liberty" to do so.

"I wish to reiterate my gratitude for the significant contributions Father Radloff made to St. Francis as pastor. I also reiterate my regret for the sorrow his departure has caused many of you to undergo," the bishop's weekend statement said.

Fr. Tom Faucher, Radloff's canonical adviser and procurator, told NCR on Sunday that the priest was "understandably sad, but under the circumstances, he is OK" and "he appreciates all the support he continues to receive." Faucher said Radloff would still prefer to serve in the Baker diocese.

The congregation sent a cover letter to Faucher in which "the tone was extremely pastoral and sensitive," Faucher said, adding that there are no plans to appeal the congregation's determination to the Apostolic Signatura, the church's highest judicial authority.

While the text of the decision cannot be made public, Faucher said, he noted that "the ruling itself was not critical of Fr. Radloff in any way."

Faucher said Radloff does not plan to speak directly to the press until he has heard from Cary.

As of Sunday, there had been no communication between the diocese and Radloff since the priest wrote the bishop in December asking to know the reasons for being denied a letter of good standing so he could assist during the Christmas season at his mother's parish in Chicago, Faucher told NCR.

Radloff has been staying with his mother after being relieved of his duties in Bend.

Wade Fagen, a lifelong St. Francis parishioner, said he was "speechless and furious" about the congregation's ruling.

Crediting Radloff for "bringing my kids back to church," Fagen said, "I am so upset. This makes me sick. We have the right to know what he did wrong. There is something being covered up and hidden. I don't know why, and I don't know what. I was afraid this was going to happen. I just don't understand this."

Ken Roberts, a Knight of Columbus who has been at the parish for more than 30 years, is one of those who hopes parish life will now calm down. He said he believes the Vatican decision "was a relief for many, as the whole affair has left so many things up in the air. So a decision one way or the other will hopefully put the issue to bed."

Roberts added, "Radloff was very impulsive and made a lot of decisions without regard for the consequences. He dismissed a lot of good people from the staff when he arrived, which alienated many. Some of those are returning under the new regime, which is very heartening, and it is because Fr. Julian (Cassar) is reaching out to them and trying to heal our community, which has been in some kind of turmoil for the last several years."

"I believe most are very happy with the priests we have here now, and Fr. Julian can now be the true pastor and not just an administrator," Roberts continued. "He has been much more involved in activities than Radloff was, especially in the school, which has been a welcome sight. ... We see this as our parish. Priests and bishops come and go, but we and many others are here to stay."

Radloff supporters praise his involvement with the parish elementary school and credit him with bringing long-absent Catholics back into the pews.

Donna Hodson, vice president of the St. Francis of Assisi School parents' organization, posted a rebuke of Cary on her Facebook page the day the congregation's ruling was made known.

Alluding to Cary's 18-year "leave of absence" between leaving St. Patrick Seminary in Menlo Park, Calif., in 1970 and returning to finish studies for the priesthood in 1988, she wrote: "Praying tonight that Liam Cary takes another leave of absence for 18 years. I have been in the Diocese of Baker longer than he has been a priest. I am embarrassed to be a Catholic in the diocese where he is bishop. Good bye, St. Francis!"

Hodson told NCR on Monday: "I have been a Catholic all my life, 46 years. I am done with Catholicism. We are looking at the Episcopal church."

Pam DiDente, whose two children went through the parish school, called the Vatican decision "a shameful travesty" and said the parish "is in shambles."

"The Catholic church hierarchy was for a long time successful in sweeping under the carpet the problem of priests abusing children. When will they start to deal with the problem of bishops abusing priests?" she said. "Personally, I will pray for Fr. Radloff as I always do and for a transformation in Bishop Cary."

"I will continue to lector and hope the others continue to be active in the church," she wrote in an email to NCR on Saturday, "although I do know of one young family that resigned from the parish yesterday and that saddens me deeply. I do know others who have left. It's so ironic since Bishop Cary just launched his 'Come and See' evangelization program last week. Does he need a reality check?"

Her husband, Tom Comerford, concurs. In an email, he wrote: "In one of Plato's Dialogues, Socrates is said to have claimed that it is better to suffer injustice than to do injustice. How can it be that Fr. Radloff understands so well the wisdom of that claim, while Bishop Liam Cary and the Congregation of the Clergy just don't get it?"

DiDente and Comerford have been participants in a weekly Friday meeting of Radloff supporters, usually attended by 15 to 25 people.

Mike and Kathleen Cleavenger also participate in the weekly meetings. In an email Sunday to NCR, Mike Cleavenger wrote: "Kathleen and I will not be attending St Francis after 27 years. ... We leave open the possibility of returning, but that would take a leadership response from Bishop Cary that encourages healing, i.e. return of Fr. Radloff to service."

"The first 100 went so quickly, we have ordered another 100," parishioner David Grenbemer said.