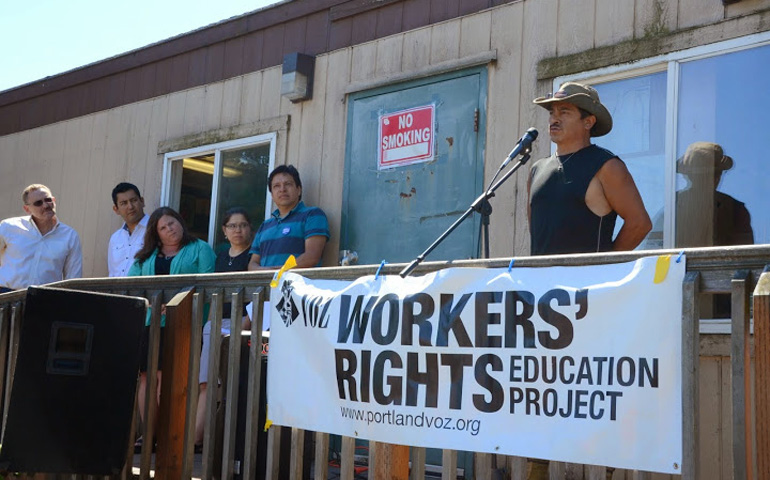 Editor's note: Following is an updated report on the Voz Workers' Rights Education Project in Portland, Ore., not receiving a Campaign for Human Development Campaign grant during the recently completed funding cycle. It includes comments on whether Voz withdrew its application or if it self-disqualified via its board's letter to CCHD.

A grassroots Portland, Ore.-based organization that works on behalf of immigrants and day laborers disqualified for a national Catholic Campaign for Human Development grant after CCHD officials made it clear the request would be denied unless the group severed ties with a major U.S. Hispanic rights organization, the National Council of La Raza, because of its support of same-sex marriage.

CCHD had provided annual grants to Voz Workers' Rights Education Project since the group's founding in 2000. Voz has been an affiliate member of NCLR since 2009.

CCHD's national director said in an email Thursday to NCR that the U.S. bishops' anti-poverty campaign was "taken aback when Voz' board of directors placed the organization out of the running for a CCHD grant."

"Otherwise," wrote CCHD's Ralph McCloud, "we would have evaluated their application together with the hundreds of others we look at every year. In fact, the door is still open."

Voz development director Ranfis Villatoro in an email Saturday said the group had not officially withdrawn its application.

"I think CCHD has had an evolving framing of what happened, and my take is that they would prefer that it be framed in such a way that Voz withdrew its application. That framing shifts the story on each organization's actions," Villatoro wrote.

"The truth is, CCHD allowed Voz an opportunity to sever ties with NCLR. In our letter, our board made the decision not to sever ties with the understanding that CCHD would ultimately decide not to fund us. The letter was neither explicit nor implicit about Voz withdrawing its application. Where we were explicit is our decision to stand with NCLR and why the separation of allies slows the advancement of social justice, a value of CCHD."

Founded in 1970, the national CCHD announced more than $14 million in grants on June 19. The annual CCHD collection in most dioceses takes place the Sunday before Thanksgiving.

A news release Wednesday, issued just prior to a press conference at Voz Portland headquarters, said: "Voz was a finalist for a $75,000 grant but was told in a conversation on May 30 with several staffers of both Voz and CCHD that eliminating affiliation with NCLR would be the only way to receive continued funding."

Voz's officials said loss of the anticipated grant could severely hamper their work. The organization's annual budget is about $310,000.

In the press release, Voz leaders said they refused to disassociate with La Raza as a matter of principle: "Voz submitted a [June 6] letter to CCHD declining to terminate affiliation with NCLR and stood with NCLR on their values."

"CCHD forced the question of marriage equality into the grant process," said Romeo Sosa, Voz executive director, in the release. "Ultimately we are an organization that does not discriminate. Many of us know people who are gay, lesbian and transgender. They are our aunts and uncles, nephews and nieces, friends, co-workers and neighbors."

"This truly hurts our organization," Sosa said. "It's going to impact our employees as well as our clients, which is a sad situation."

Voz oversees multiple efforts, including connecting day laborers with employers, English tutoring, computer training, leadership development, and advocacy with governmental agencies. It was recently successful in helping convince the Multhomah County sheriff to join other county sheriffs in Oregon to "no longer comply with the Immigration and Customs Enforcement's requests to keep undocumented immigrants in jail for deportation," the Voz website reports.

One of its higher-profile programs involves combating what the organization describes as "rampant theft of wages" in Oregon. Underpayment or nonpayment of day laborers and immigrant workers is common, predominantly in agriculture, construction and service industries such as restaurants.

Both McCloud and the director of the Portland archdiocese's office that administers the local CCHD collection and grants praised Voz.

In an email Saturday, Cato said he wanted to clarify that "by intentionally deciding not to meet the criteria, an applicant necessarily withdraws themselves from consideration. If I wrote that they withdrew their application then I was in error."

One of the nine criteria requires that a grant recipient may not be part of a coalition or other organization that supports tenets in conflict with "fundamental Catholic social and moral teaching."

Voz's affiliate membership in the NCLR as well as its receipt of NCLR grants "became problematic," McCloud told NCR. NCLR supports same-sex marriage, describing it as a rights equality issue.

McCloud said the CCHD "strengthened the language" of its criterion on "conflict with church teaching" during a 2010 "renewal" of the CCHD grant process.

In recent years, CCHD has been under pressure from some anti-abortion organizations and same-sex marriage opponents who have charged that the CCHD funded organizations with agendas at odds with church teachings.

In his email, McCloud wrote: "The dialogue between CCHD and its grantees is constant, open and frank ... This is a case of open covenants openly arrived at. We respect the thoughtful decision of a grantee to take stances that don't square with the mission of CCHD, but we expect others to respect our commitment to Catholic values."

Villatoro told NCR on Thursday that individuals and other organizations are rallying to help "fill the gap" left in the Voz budget by the loss of CCHD funds. About $25,000 will have been pledged or donated by the end of this week, he said, "and we are still waiting on other allies who have said they would pledge support."

In the past, the U.S. Conference of Catholic Bishops has collaborated with La Raza on immigration and other issues, NCLR executive Lisa Navarette told the Portland street paper Street Roots.

In its resource section, the USCCB website features several NCLR publications on issues, including the housing crisis for Latino families and barriers faced by Latino children in education.

Navarette said La Raza had written a letter to CCHD explaining that not all of its affiliates are in line with every NCLR stance.

"Of course we're not going to align completely on our agendas," Navarette told Street Roots. "We've worked with Grover Norquist and evangelical groups. The mish-mash of organizations ranges from far right and far left. Allies are allies."

"There are hundreds of families in our community who need our help. It has been a fundamental issue when you have same-sex partners that you don't have the same rights to petition for your spouse," Navarette added. "That's the reality of it and the civil rights aspect of it. ... We cannot be an organization that condones exclusion."

The letter continued: "The decision we have made took into consideration the needs, as well as the values and mission of our organization. The need for funding is great. However, we are a worker-led organization that empowers immigrants and day laborers to gain control over their working conditions. At the root of that mission, is the pursuit of justice and equality for all immigrants and day laborers. We have always found that to do this, we need all allies, day laborers, and immigrants to stand together in unity. The philosophy of building borders between friends and allies has long been a debilitating instrument to slow the advancement of social justice and equality. Alone we cannot achieve anything."

The letter concluded, "We hope one day CCHD and the U.S Bishops can stand with us."

In its coverage, Street Roots quoted John Gehring, Catholic Program Director for Faith in Public Life, a Washington, D.C.-based organization of religious progressives. Gehring, a former USCCB staff member, authored a detailed report released just over a year ago that details efforts by organizations such as the American Life League to scrutinize CCHD funding for any hints of supporting groups with platforms or links to organizations out of sync with church teaching.

"Conservative attacks on the bishops' anti-poverty campaign have intensified from well-organized opponents who think the church should stick to charity and ignore the fact that Catholic social teaching also requires a response to the structures that perpetuate injustice," Gehring told Street Roots.

"Bishops are in a tricky situation as the culture shifts beneath their feet and acceptance of same-sex civil marriage grows rapidly," Gehring said. "The challenge is how can CCHD protect its Catholic identity without pulling away from the kind of effective coalitions that are needed to empower low-income communities and that put Catholic teaching into action. Navigating this can be complicated, but it's a major blow for community organizing and a real loss for vulnerable families if more dioceses make the decision that they can only associate with individuals or organizations that agree with Catholic theology on every issue."