Scouts navigate the sacramental waters of Catholicism for church award 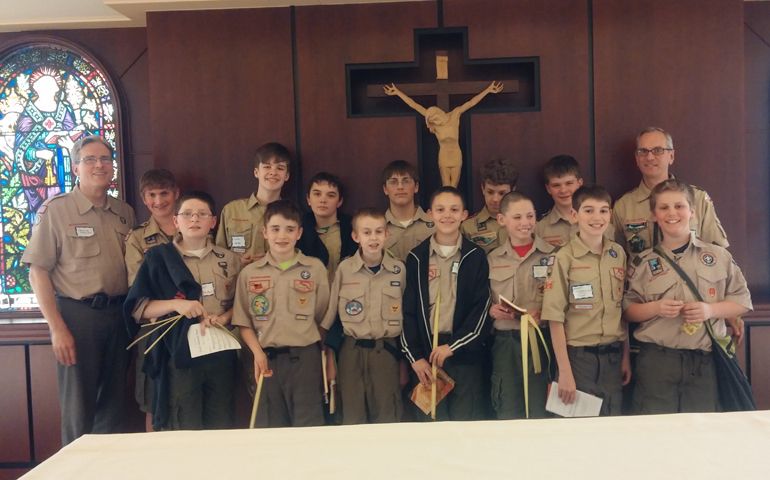 If faith is a gift, how can a Catholic parent be a truly thoughtful gift-giver when it comes to conferring the faith we love to our children? Having received the Catholic Scouting medal as a boy, I found myself wondering if the Boy Scouts of America could help me communicate more than just the Scouting values of personal generosity and civic participation to my son, allowing him to build some measure of that "spiritual self" that seems increasingly elusive as more and more young people join the ranks of the "religiously unaffiliated" that we hear about in all the polls.

On Sunday, my son will join 12 of his friends, along with thousands of other Scouts across the country, in receiving an award called the Ad Altare Dei ("To the Altar of God") in the Cathedral of the Holy Cross in Boston. The bronze cross, suspended from a bright ribbon festooned with the colors of the Vatican and fine stripes of red, white and blue, is a symbol of accomplishment after a year of service and studying the shared values of Catholicism and Scouting.

The medal was first conceived by a priest in the Los Angeles archdiocese as a recognition of those Scouts who were faithful altar boys. According to David Peavy in a brief history of the program, Fr. James Dolan borrowed words of welcome from the Latin Tridentine Mass, "Introibo ad altare dei" ("Go to the altar of God"), for a commendation based on factors like a boy's "punctuality, fitness, decorum on the altar and devotion" -- along with 250 hours of altar service. In February 1926, a boy named Edward Thurin became the first recipient. Within 18 months of the national adoption of the program in 1939, an additional 3,000 Scouts had been similarly recognized.

The program of study focused on a deeper understanding of the seven sacraments. Conceived in 1966 in the wake of the Second Vatican Council, the curriculum took shape under the guidance of an order of nuns in Kansas City, Mo., who were commissioned to polish it up. In the program I led here in Massachusetts beginning in the fall, I would send an email to the Scouts on Fridays outlining some themes related to each sacrament that they could discuss over the weekend with their parents. We met on Monday nights and engaged in a series of exercises and discussions meant to deepen their faith.

The emails were punctuated with a biweekly anecdote, illustrating some of quirkier aspects of how Christian understanding about the sacraments grew over the centuries. Our journey began with baptism and a story about how St. Patrick persuaded a king to wade into a river and become a Christian. When the saint realized afterward, as blood was filling the water, that he had accidentally stabbed the king in the foot with his bishop's crozier, he asked the king why he hadn't shouted out or complained. "I assumed it was part of the ritual," the king replied. And so we began a discussion of the relationship between rituals and God's gift of grace.

"What is a sacrament?" I asked the boys at first.

"Sacraments are things that either require a lot of work or cost a lot of money -- like weddings," was the first answer.

"No, sacraments are steps on the ladder of life, because you have to get the earlier sacraments before you can get the later sacraments," replied a boy named Matthew.

We commenced talking about baptism and its similarities to the joining ceremony for new Scouts. Adam jumped in: "Baptism's like an initiation, where everybody finds out you're a Catholic."

Patrick had a different take: "Baptism is about cleaning you up before you have to get dirty later in life -- kind of like prevention."

In November, we spent two weeks talking about the Eucharist, which derives from a Greek word for "thanksgiving." Why does Jesus first give thanks before breaking the bread at the Last Supper? I asked them.

"It's so easy to take Communion for granted, because we do it every week. But it's really very special," Isaac said. "It's a way to thank Jesus in public for the fact that he keeps coming back to be with us."

Our pastor, Msgr. Michael Foley (a former Cub Scout), spent an evening taking the guys on a tour of the church sacristy and talking with them about the meaning of the Eucharist. Why is it also called "Communion," from the Latin word for "community?" I asked them.

"It's different from going to a restaurant," Tim replied, "where everyone eats something different. With Communion, you're all eating the same thing -- so it brings people together."

While studying Scout Law from different countries around the world, we discovered that the U.S. is one of the only countries that include the word "reverent" in the Scout Law, an often-recited list of a Scout's values. Can someone be reverent if he doesn't believe in God?

"Of course not!" snapped Max indignantly.

"Why not?" thoughtfully countered his older brother, Ries. And a discussion ensued about the different components of reverence, including respect and humility toward God and toward one another.

This led into our discussion of reconciliation. Why did Jesus institute a sacrament of confession when he appeared to the apostles after the Resurrection?

"People need to tell God about their mistakes because it makes us humble," Justin said.

"I think confession helps God because it lets him know that we don't think we're perfect," Olivier added.

Fr. Steven LaBaire, pastor of a parish in Worcester, Mass., led the boys through a discussion of holy orders and shared his recollections of what it was like to be a seminarian. Paulette Hallihan, a hospice nurse who also serves as a Scout leader, met with the boys another Monday to talk about the sacrament of the sick and about the special role suffering plays as an occasion for God's grace.

Perhaps the highlight of the year was the visit by Holy Cross Emeritus Catholic history professor David O'Brien and his wife, Joanne, who discussed the sacramental dimension of their 53-year marriage.

"To have someone in your life who loves you as you are is really amazing," he said.

Joanne rolled her eyes dramatically at the thought of all the things one has to put up with in married life. But she added: "We live in a hard world. It's not a loving world. But Jesus calls us to love one another and to forgive one another. Marriage is about trying to bring out the best in the other person."

David further offered that "marriage is like a little 'school of love' -- a relationship that teaches us how to love. Our new pope is so good at that, too!" Speaking about his own aspiration for family life, Olivier responded, "It's a sacrament that is very spiritual because it involves people being really devoted to one another. And devotion is about the most important thing in life."

For a service project, the boys searched their closets for children's clothing they'd outgrown and some gently used toys to donate. They also committed themselves to looking in on an elderly relative or fellow churchgoer for a month to help demonstrate the church's sense of community. On April 12, they joined a full-day retreat with several dozen other Scouts from across the Boston archdiocese that concluded with an hourlong "board of review," where members of the diocesan Catholic Committee on Scouting asked the boys to explore the meaning of the sacraments and to explain what it takes to keep building their own faith.

On Sunday, their families will gather for a Mass led by Fr. Matt Williams to recognize all their hard work and to celebrate as Scouts the beauty of our shared Catholic faith.

[Dr. Patrick Whelan is a pediatric specialist in rheumatology at MassGeneral Hospital for Children and a lecturer in pediatrics at the University of Southern California and Harvard Medical School. He is a member of the National Catholic Reporter's board of directors.]

All Catholics must be missionaries, pope says in message