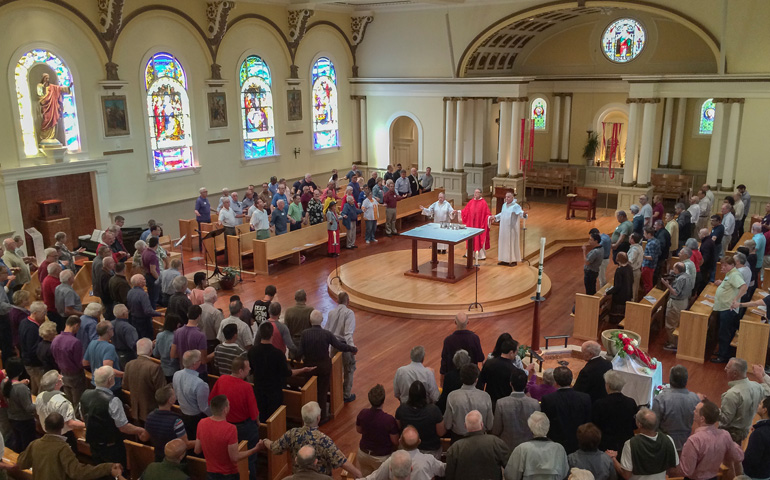 This is the second in a five-part series about San Francisco's Most Holy Redeemer Church. Each day this week, we will publish one part of this story. Find all parts here.

Most Holy Redeemer parishioners take some pride in being a Francis-like parish well before Francis. The pastoral approach to gay and lesbian lifestyles has been the approach of choice for at least three decades. Parish literature calls MHR a "spiritual home to all," young and old, singles and families, "straight, gay, lesbian, and transgender." The same literature says the parish ministers to "the healthy and the sick, particularly persons with HIV disease."

Most Holy Redeemer makes a point to welcome strangers at every Sunday Mass. At the beginning of each service, visitors from outside the Bay area are asked to stand and identify themselves, and they are welcomed with applause. Before they leave the church, they are handed a slick brochure that states the parish mission and outlines its various ministries.

"Once you walk in and say hello to everyone, you feel like you are with friends," parishioner Dennis Callahan said about that welcoming spirit. "You feel like you're at Christmas, when the whole family meets for dinner or for New Year's, or for somebody's birthday. You have that feeling of celebration whenever you walk into the church."

MHR has one main exit door. As worshipers leave the church, they end up mingling outside. They also more naturally funnel into the lower church hall after Mass, where refreshments are served on Sundays.

Liturgies are enhanced by the church's emphasis on good music. Pastor Precious Blood Fr. Jack McClure hired a new music director, who some have said has helped integrate a wider range of music. Over the years, the parish has also been graced by professional San Francisco opera singers and musicians.

Gathering around a piano to rehearse before a 10 a.m. Sunday Mass, Sabrina Romero, a young cantor, remarked she had sung at several parishes but has never had more active positive feedback than she receives at MHR. Her solo rendition of the "Ave Maria" the Sunday before Christmas moved several worshipers to reach for their handkerchiefs.

Weekday Masses are, on the other hand, low-key. Following these services, most worshipers cross 18th Street heading for La Taza, a local coffee shop, where they sit at small tables to share stories and catch up on the day's events. On Fridays, the rectory opens its doors after Mass for coffee, tea and doughnuts.

"This is our community and has been for years," said Ikuko Hotta, a Japanese convert. She joked that she is an exception within the group as she is "married, Japanese and straight."

Most Holy Redeemer was dedicated in 1902, when the neighborhood was still on the outskirts of San Francisco. It survived the 1906 earthquake and fires, which never reached the church. During the 20th century, MHR served the families of working-class Scandinavian, German and Irish immigrants.

The Golden Gate Bridge was completed in 1937, opening San Francisco to the north. In the decades that followed, but particularly in the 1960s, Catholics patterned wider U.S. migrations and moved to the suburbs, where land was cheap and new homes were sprawling.

The 1970s marked the awakening of gays and lesbians across the nation. Soon, many were looking for safer havens in which to proclaim their emerging self-confidence and identities. San Francisco became a draw, especially the depleted Eureka Valley neighborhood filled with empty Victorian-style homes and where Most Holy Redeemer Parish sat.

Those years were marked by conflict as LGBT ranks grew, along with gay-owned enterprises, including restaurants and bars that catered to the new arrivals. Tensions peaked in 1978 with the murder of the city's first openly gay San Francisco supervisor, Harvey Milk. By then, the neighborhood was commonly called "the Castro," after the main street that runs through it.

As a parish, Most Holy Redeemer reflects the wider Castro demographics. It, too, is graying -- with a difference. Younger Catholics come from around the Bay, making up much of the parish. The very diversity that once moved some Catholics to flee MHR now seems to draw others, especially younger ones who feel at home and want to help prepare their children to live in an increasingly diverse world.

Jim Stockholm, a parishioner for 18 years, is on the parish communications committee. Part of his job is outreach -- to "sell" MHR to the wider audience. He married his partner, Oliver Galupo, a Filipino, one year ago.

Galupo, an artist, works with Stockholm, drawing posters and signs for the parish and its Facebook page. The communication committee's budget runs $20,000 a year, with much of the money going into advertising in the local newspapers, including what some in the parish refer to as "the Castro rags."

Asked to name his biggest challenge, Stockholm replied squarely: "It's the Catholic faith. It's got a bad rap in the LGBT community. We have an archbishop who helped fund and led the charge against same-sex marriage. All that translates down to, in some way, our parish. We're in the Castro, in the community, and so we have the challenge to overcome that, to say we are welcoming."

Is Most Holy Redeemer seen as an exception or part of the problem?

"I think both," Stockholm answered. "They see our ministries. They see our Wednesday suppers. They see us feeding the homeless, but when something comes down from Rome or from the archdiocese, they have to scratch their heads and say, 'There are these Catholics. Aren't they following what the archbishop has said?' So it's a little bit of both. We can't separate ourselves from Rome or from the archdiocese of San Francisco."

MHR was vandalized in 2008 and 2009 as protesters drew large swastikas on the church. Their anger was triggered by the archdiocese's support of Proposition 8, a referendum that sought to overrule a court order legalizing gay marriages. (The proposition passed, but was eventually ruled unconstitutional.) Gay groups quickly denounced the MHR defacing, saying the anger had been misplaced.

Archbishop Salvatore Cordileone was appointed to San Francisco in October 2012. He heads the U.S. Conference of Catholic Bishops' Subcommittee for the Promotion and Defense of Marriage, and, from that perch, he has led a campaign against same-sex marriage, which has been at the top of the gay rights agenda for the past decade.

The U.S. bishops have been very visible in their opposition to same-sex civil marriage, though their efforts seem to have done little to stem the tide in favor of such unions. Thirty-six states (and the District of Columbia) now allow same-sex marriage. What the bishops see as morally offensive, gay rights activists see as a human right.

In a move viewed as a particularly strong attack against gays and lesbians, Cordileone appeared at a June 2014 rally in Washington organized by some of their harshest critics. Among the rally's co-sponsors was the Family Research Council, which the Southern Poverty Law Center has listed as a hate group because of the way it spreads misinformation about LGBT people.

Catholic gay activists were among the 80 religious and political leaders who pleaded with the San Francisco archbishop to stay away. But he chose to go and speak anyway.

Last month, he updated the faculty handbook for archdiocesan high schools to include 15 "affirm and believe" statements on church teaching, with a heavy emphasis on sex and sexuality. It also defined teachers as "ministers." A good number of teachers, parents and students found the amended handbook coercive and discriminatory and have resisted its implementation.

But there appears to be another side of Cordileone, a softer, more pastoral side. MHR parishioners credit him for showing up four times to serve food at their widely celebrated Wednesday suppers. He waited on tables without fanfare, requesting no photographs be taken. He is also planning to celebrate one of the parish's morning Masses, McClure said.

MHR parishioner attitudes toward their archbishop vary. They are generally subdued and respectful. He's characterized in the parish as a shy person who has to work at being sociable. "I cut him a lot of slack," Callahan said. "After all, he gave us our current pastors."

Late in 2014, Cordileone fulfilled a promise he made in the midst of the rally controversy to meet with some of his opponents. On two different occasions, he met with leaders of two gay Catholic groups, DignityUSA and New Ways Ministry. Each organization has for many decades received harsh criticism from U.S. episcopal ranks for advocating on behalf of LGBT Catholics.

According to a New Ways Ministry statement, Cordileone expressed his genuine concern about church teaching, while not wanting to harm lesbian and gay people. "Leaders of both organizations felt that he had been warm and friendly and showed sincere respect for each person throughout their time together," the statement said.

Part three of this story will be published on Wednesday, March 18.