Unresolved issues remain in dispute between pastor and bishop 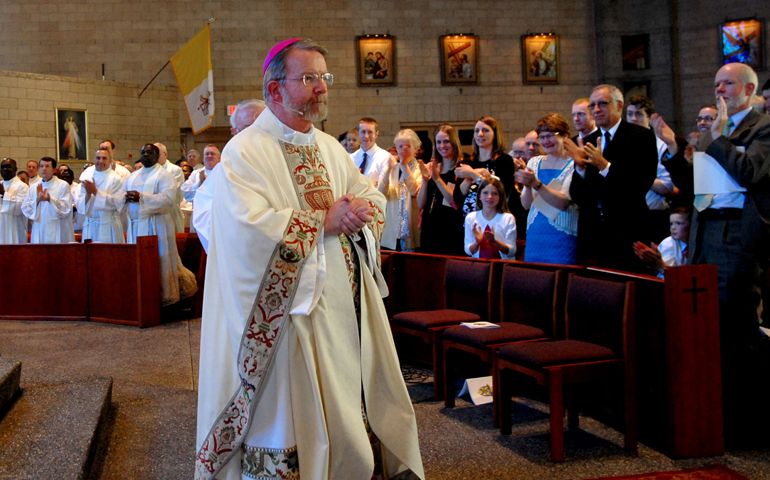 Bishop Liam Cary, bishop of Baker, Ore., at his episcopal ordination Mass May 18, 2012, at St. Francis Church in Bend, Ore.
This article appears in the Bend controversy feature series. View the full series.

Bend, Ore. — Editor's note: This is Part 1 of a five-part series on the dispute between a pastor and his bishop in the St. Francis of Assisi Parish in Bend, Ore.

Unanswered questions, roiling emotions and secrecy remain at the St. Francis of Assisi Parish in Bend, Ore., in the wake of a recent Vatican ruling that many hoped might help calm the waters there.

After 21 months as pastor, Fr. James Radloff was unexpectedly and suddenly removed from his post Oct. 1 by Baker, Ore., Bishop Liam Cary. Radloff appealed the decision, but the Vatican upheld the removal.

The ruling by the Congregation for Clergy is by most accounts a complete victory for Cary, as it confirms the removal, allows the bishop to keep secret the reasons for the ouster, and permits a continued bar on the priest's public ministry.

Dated Jan. 31 but not made public in Bend until Feb. 14*, the decision by the Vatican settles the issue of the immediate administration of the diocese's largest parish but silhouettes other challenges.

First, there are the intertwined questions of Radloff's future as a priest and how Cary will handle that, which is being closely watched throughout the diocese.

Second, Bend, the most populated city in central Oregon, has about 76,000 residents, and St. Francis of Assisi is the city's only Catholic parish. Can it be made whole and well again?

Compounding the situation is that when Cary served Radloff with the formal decree of removal, he praised Radloff's work at the parish and assured parishioners the cleric had done nothing illegal and remained a priest in good standing.

Radloff filed an appeal of his dismissal Oct. 18 with the help of Fr. Thomas Faucher, a canon lawyer and priest of the Boise, Idaho, diocese who at one time served as judicial vicar in the Baker diocese under both previous bishops: Robert Vasa and Thomas Connolly.

Among other things, Radloff asked in his appeal that the reasons provided to him for his removal be made public, and in a statement issued through Faucher later in October, he decried how Cary's action "resulted in widespread rumors of every type about me."

In his statement Oct. 30, Radloff said he responded to Cary's Aug. 1 request for his resignation "by asking for mediation and reconciliation, which requests were rejected."

The text of Faucher's statement was carried as a full-page advertisement in the Bend newspaper, The Bulletin, paid for by a group of Radloff supporters.

During a Feb. 5-10 visit to Bend, this reporter heard:

Radloff launched a handful of well-received programs. He arranged for a $50,000 matching grant for the parish school. A "report card" survey of parishioners asking evaluation of his work received nearly 600 responses from the parish of about 2,000 households and overwhelmingly endorsed his administration. Parish finances were on the upswing. (Total weekly collections during his first year totaled $926,600, up from $803,488 in 2011.)

Whether Radloff is an extraordinary evangelist or a pied piper, there is little doubt he filled the pews of a struggling St. Francis of Assisi Parish and steered it toward financial stability during his 21 months there.

The months leading up to Cary's punitive action and Radloff's appeal held hints that relations between the bishop and priest were going sideways.

In April 2013, for example, petitions were circulated asking the bishop to back down on plans to transfer popular Spanish-speaking priest Fr. Juan Carlos Chiarinoti, a native Argentine. A petition in Spanish was followed by one in English.

Cary bristled. In a May 7 open letter, the bishop admonished parishioners and Radloff.

Opinions vary on whether Cary's action and Radloff's appeal were a case of an ordinary establishing clear lines of authority and a pastor seeking justice, or if the situation was more personal in nature.

Radloff has been criticized for both his handling of parish staff changes and a sometimes contentious personality. But others laud the priest for making the right changes and call him "definitely passionate."

Radloff was appointed St. Francis' pastor in late 2011 by retired Bishop William Skylstad, who served as apostolic administrator of the diocese between the time Vasa left for Santa Rosa, Calif., in early 2011 and the time Cary was named Baker bishop in March 2012.

Fr. Julian Cassar, who had been rector of St. Francis De Sales Cathedral Parish in Baker City, Ore., was named to take over the St. Francis leadership role effective Oct. 17. While the cathedral is located in Baker, diocesan administrative offices are in Bend.

*An earlier version of this story had an incorrect date.

Parish | Unresolved issues remain in dispute between pastor and bishop