US Catholic priests happy with life and ministry, says study 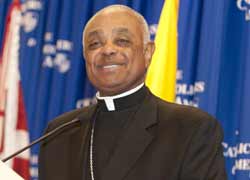 WASHINGTON -- Despite all the negative publicity of recent years, research shows U.S. Catholic priests are demonstrably among the happiest, most job-fulfilled and satisfied men in the country, theologian and psychologist Msgr. Stephen J. Rossetti said Oct. 5.

Key reasons seem to be their prayer life and the close relations they have established with God, fellow priests and laity in their parishes, he said.

Archbishop Wilton Gregory of Atlanta, the strong-minded former president of the U.S. Conference of Catholic Bishops who played a major role in 2001-02 in leading the bishops to confront the crisis of clergy sexual abuse of minors, strongly affirmed many of Rossetti's findings from his own experience.

Rossetti and Gregory were the two main speakers at a symposium Oct. 5 at The Catholic University of America in Washington. The symposium -- titled "Why Priests Are Happy" -- marked publication of Rossetti's research book by the same name. The more than 100 participants received free copies of his book, published by Ave Maria Press at Notre Dame.

The title at first glance might seem unlikely from a book by Rossetti, who knows first-hand the problems that many unhappy, dysfunctional or troubled priests face. From 1996 to 2009, encompassing the peak years of the clergy sexual abuse crisis in this country, he was president and CEO of St. Luke Institute in Silver Spring, Md., the country's leading Catholic facility treating priests and religious who face alcohol, drug or sexual addictions or other severe problems that make them incapable of effective ministry.

Gregory knows the issue equally well in another way.

First, as a young auxiliary bishop in Chicago whose main background was a doctorate in liturgy, in 1993 he was appointed to head the Diocese of Belleville, Ill., just as that diocese was in the midst of a local clergy sex abuse scandal as bad as that which emerged in Boston eight years later. The difference was that Gregory dealt with the issue effectively, removing abusive priests and it made few of the national headlines prompted eight years later by the Boston Globe's reportage on Boston Cardinal Bernard F. Law's inept handling of the same kind of situation in Boston.

Second, as USCCB president 2001-04, Gregory played a major, almost certainly decisive, role in getting the entire body of U.S. bishops to adopt a legally binding charter for the protection of young people, subsequently approved by the Vatican, and many of its norms more recently adopted by the Holy See as norms for the universal church.

Whatever criticisms of inadequacy the U.S. charter and norms and subsequent implementation may face, it has introduced radical changes in the way both the U.S. and global church has addressed the sexual abuse of minors by priests over the past decade. Since then the Holy See has adopted universally more restrictive laws and more recently asked bishops' conferences around the world to adopt measures that closely parallel the 2001 norms of the USCCB.

The sexual abuse of minors crisis remained an important backdrop to the Rossetti study released Oct. 5. But he pointedly cited other data to argue that even while U.S. Catholic priests were under the most fire over that issue, their prayer life, their spiritual centering and their relations with God, other priests and lay friends continued to make them as a group statistically happier than almost any other segment of Americans.

In his talk Rossetti repeatedly invoked data from his 2004 and 2009 surveys of U.S. Catholic priests (more than 1,200 respondents in 2004, more than 2,400 in 2009) along with other surveys, to argue that Catholic priests are among the happiest people in any profession or occupation in the United States today.

He argued in his book that this information could lead to significant changes in vocation recruitment, seminary formation and other aspects of the church's approach to those areas and to mentoring of young priests.

His research showed that young men recently ordained are the most vulnerable to many challenges to the priesthood, from celibacy to isolation, loneliness and other factors that may affect a priest's sense of self-worth, he said.

But he also reported that on many happiness factors that correlate closely with a priest's sense of worth, satisfaction, well-being and inner peace, priests who were ordained within the past 20 years or who have been ordained more than 40 years score far better than priests ordained in roughly the 1970s or '80s.

The surveys also found that priests ordained in those middle post-Vatican II years are less likely to value daily private prayer or other spiritual exercises than their older or younger confreres, he said. His surveys found that the more time a priest spent in prayer each day, the more likely he was to be happy and to score high on many other factors that correlate positively with happiness.

Gregory said his own experience as a priest and bishop reinforced Rossetti's findings on prayer and many other factors in what makes priests happy.

"Prayer quite simply is an indispensable component of and a reason for a priest's happiness and ministerial fulfillment," he said. "Prayer is so intimately tied to a priest's job satisfaction that without a genuine life of prayer, a man soon withers and may even lose his desire to be a priest."

"Priests help to bring people into a life-giving relationship with Jesus Christ," he said, "and that same relationship with the Lord is the very bedrock of their own faith and happiness. Priests literally market a spiritual joy that they themselves depend upon."

You can't unring the bell

Chicago's black Catholic deacons 'lift each other up'

On other side of church closings, new reasons for hope