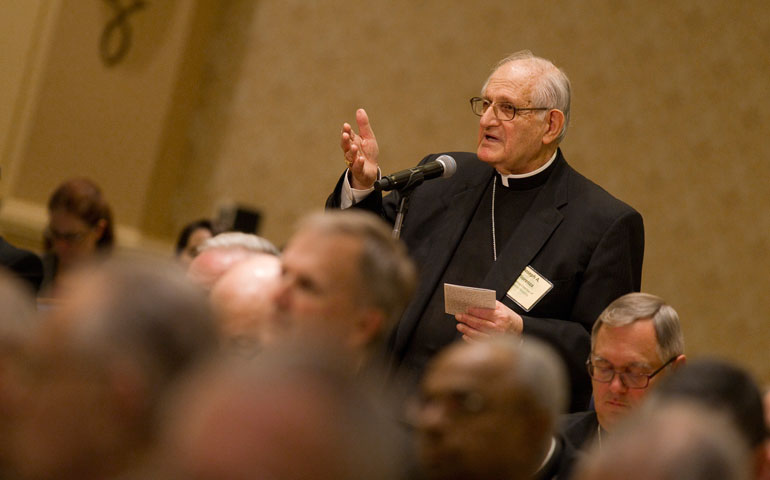 On an otherwise dull agenda for the fall assembly of the American hierarchy, one item has been the subject of much discussion inside and outside the U.S. Conference of Catholic Bishops.

Following a three-year presidency of New York Cardinal Timothy Dolan, the bishops are set to elect a new chief and a spate of other leaders.

The discussion question is basic: Who's going to lead this group?

Or, in the words of another former staffer, will the new leadership embrace dialogue and collaboration, or will it "hunker down and preserve and protect"?

At their Nov. 11-14 assembly in Baltimore, the bishops are to elect a new president, vice president, and chairs of six of their committees. Each of the offices has a three-year term. Traditionally, the sitting vice president -- currently Louisville, Ky., Archbishop Joseph Kurtz -- is elected as president.

Dolan's election in 2010 spurned that tradition, with the bishops voting 123-111 on the third ballot to select him over then-vice president Bishop Gerald Kicanas of Tucson, Ariz.

Sources in the bishops' conference tell NCR that a number of the prelates view Dolan's presidency as either a failure or a disappointment. They say a slim majority elected Dolan to uphold a more right-wing Catholic agenda, thinking Kicanas would be too conciliatory toward Catholics more in the mold of the late Cardinal Joseph Bernardin. (See related story.)

Dolan kept the bishops on the culture wars bandwagon, the sources say, but did little to build bridges among the different parties in the conference.

St. Petersburg, Fla., Bishop Robert Lynch, who served as the conference's associate and general secretary from 1984 to 1995, said in an interview that the bishops' vote to not elect Kicanas left Lynch "heartbroken and mortified and embarrassed."

"I think it's useful that before a person becomes president they have three years as a vice president who is seen and not heard, but takes all this in," he said.

Two of the other agenda items for bishops' meeting underscore the tone of recent years: the presentation of a proposed "formal statement" on pornography, and an update on cross-country efforts to fight marriage equality.

This year, the choice of bishops nominated seemingly runs the gamut of tone and emphasis. Included on the list are:

According to retired Galveston-Houston Archbishop Joseph Fiorenza, who led the conference from 1998 to 2001, the future of the American Catholic scene may depend on the tone and focus the bishops decide to adopt.

The bishops might be looking for leaders who are "going to embrace the tone and the style of Pope Francis and who [are] going to want the church in the United States to be in lockstep with what the pope is trying to achieve in the Catholic church around the world," he said.

John Carr, who served as the head of the bishops' office for social justice issues from 1987 to 2012, said his former employers are undergoing "a battle for ... what kind of leadership is appropriate to the times."

"If you think we're right -- on life, on family, on justice -- then you engage and persuade," said Carr, who is now director of the Initiative on Catholic Social Thought and Public Life at Georgetown University. "And you reach out. That's what Francis is about."

"If you think we've lost, then you hunker down and preserve and protect what you have," he continued. "And you throw occasional thunderbolts."

"I think that battle's been settled by Francis, for now," Carr said. "He says we ought to be in the streets, even if there's going to be some mistakes. That has not been the rules of the road."

Although Fiorenza didn't echo Carr's battle language, he said that if the bishops want to "more closely follow the style and mentality of what now is becoming the 'Francis factor' in the church," they will need to focus on "governing in a collegial spirit."

To match the pope's tone, Fiorenza said, the conference may have to begin "showing a willingness to dialogue even with those who do not share our beliefs or share our opinions on things."

"We should have that willingness to respect others by having respectful dialogue even with those we disagree with," he said.

Mercy Sr. Sharon Euart, who served as the conference's associate general secretary from 1988 to 2001, said the bishops might pursue that sense of collegiality by consulting with the various other Catholic organizations in the U.S. to "identify areas of mutual concern and potential collaboration."

The men the bishops elect as their new leaders could seek the other leaders' input as the bishops set their priorities for the next three years, said Euart, who is now executive coordinator of the Washington-based Canon Law Society of America.

"Pope Francis has placed an emphasis on consultation in governing the church," Euart said. "Linking the determination of USCCB's priorities to broad consultation might strengthen the sense of communio among the faithful."

Lynch expressed doubt that the tone of the bishops' conference would change thanks to new leaders, saying the conference has "served the will of its membership" -- the bishops appointed to dioceses in the U.S. in the past decades.

"I don't see a lot changing in three years," he said. The focus won't change "until the membership changes and says, 'That agenda is a thing of the past, let's get with what's happening at the top and establish the priorities.' "

Besides election of their officers, the bishops are also to vote at their assembly on their 2014 budget and their planned assessment of dioceses across the country for 2015. The bishops are also set to approve new liturgical translations for the rites of confirmation and marriage, the latest in a series of new texts bishops across the English-speaking world have approved, sometimes with protracted opposition and debate, following the Vatican's 2001 publication of a new set of norms for translation from the Latin originals.

Also on the agenda are the proposed statement on pornography and an update from San Francisco Archbishop Salvatore Cordileone, who chairs the bishops' Subcommittee on the Promotion and Defense of Marriage.

John Gehring, who served in the bishops' communication office briefly in the 2000s, said the agenda for the 2013 meeting shows "the U.S. bishops have recently been defined by what they oppose."

Noting the bishops do not plan to address the continuing economic crisis, Gehring said they are not "taking the opportunity to follow the Francis playbook, so to speak, and putting issues of poverty and economic justice back at the forefront of their agenda."

A pastoral statement from the U.S. bishops on the economy proposed for approval at last year's plenary assembly failed to garner the necessary two-thirds vote for approval. Fiorenza critiqued the statement on the floor of the 2012 meeting, saying it used language that would be "lampooned" in the Catholic academic world and failed to reference the long history of Catholic teaching on issues like workers' rights to unionize and to lobby for just wages and working conditions.

Gehring, who now serves as the Catholic program director for the nonprofit Faith in Public Life, said if the bishops want to "accentuate the broader Catholic agenda," they might take a cue from Boston Cardinal Sean O'Malley, who hosted a meeting with some 60 Massachusetts state lawmakers in October to build rapport.

Referencing news reports that O'Malley, head of the bishops' pro-life committee, did not mention abortion during that meeting, Gehring said, "That's an interesting sort of example that other bishops might learn from."

Gehring also said the current changes in the Catholic church were "an incredible opportunity" for the U.S. bishops.

"My real hope is that the moderate bishops who are often drowned out by a vocal minority of culture warriors will take back the microphone," he said. "There's an opportunity to bring that voice back."

One item not on the bishops' formal agenda in Baltimore: Whether the prelates Francis is expected to appoint in coming years to posts in the U.S. will or won't bolster those moderate ranks.

Said Fiorenza: "We just hope the Holy Spirit will guide the pope in his choice of bishops that he will appoint here in the United States."

A version of this story appeared in the Nov 8-21, 2013 print issue under the headline: With vote, bishops may set new tone or 'hunker down'.