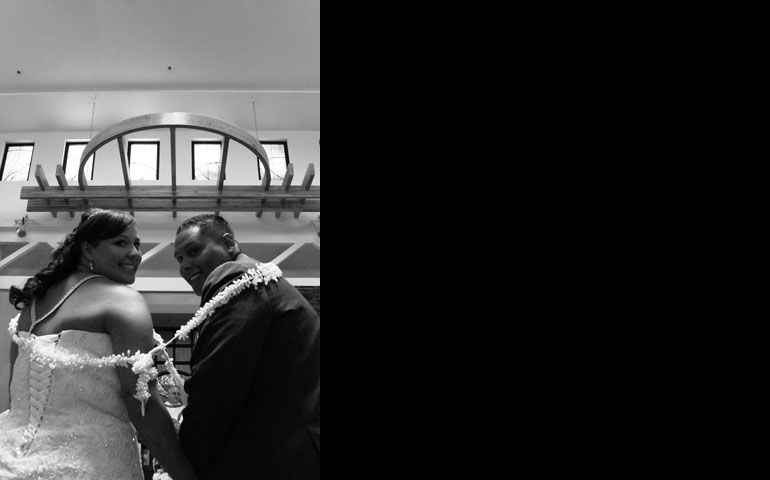 Katie Hernandez-Trejo and Philip Trejo
This article appears in the Synod on the Family feature series. View the full series.

In 2013, more than 154,000 Catholics married in the church. For many, the decision is simple, the process smooth. But not all couples share that experience, and additional stress from a faith-based wedding can leave them asking, "Is this worth it?"

A May 25, 2012, NCR report looked at church-led efforts to address the growing challenge of getting young Catholic couples to a Catholic altar. In that story, San Francisco Auxiliary Bishop Robert McElroy, now bishop of San Diego, spoke of church requirements -- among them the six-month advance notice, marriage preparation costs and wedding location rules -- that "throw up a lot of barriers."

"And while that is understandable, the net effect is that it can be discouraging to couples who want to be married in the church," he said. "One of the great problems is that at a place that should be inviting and welcoming rather than discouraging, the first word that a couple often hears is no."

NCR recently spoke to two Catholic couples married in the church for whom McElroy's words rang all too true. In telling their stories, each discussed the hurdles they faced, how they overcame them and what changes could make a faith-focused wedding a more fruitful occasion.

Following their December 2013 engagement, Katie Hernandez and Philip Trejo did what most Catholic couples do: began searching for a date and parish for their wedding.

They first turned to Sacred Heart Catholic Church in Lancaster, Calif. -- Katie's home parish, where her mother has worked since 2000 and where Philip worked for five years. Despite those connections, the response they received was the same one her sister had heard six years earlier: If you're not registered parishioners, you can't get married here.

Frustrated, the couple moved quickly to find a new church, turning to St. Mary Catholic Church, where Katie has taught physical education for two years. At the Palmdale, Calif., parish, they found a more welcoming environment, something Katie credited to her job and friendship with pastor Fr. Vaughn Winters.

Though they secured a church, the hurdles didn't disappear, with the process appearing at times more bureaucratic than sacramental. Both Katie and Philip had difficulty tracking down their sacramental records, with a priest at one point telling Katie she couldn't get married until proof was presented. A list of various fees that compounded as they went through the six-month marriage preparation had her wondering, "It's a sacrament, and we're paying for what?"

Later, she witnessed a priest move another wedding because the bride hadn't paid the proper deposit -- a rescheduling that benefited Katie, but left her thinking, "That's crazy. How do we do these things to people?"

"It was just insane to have to jump through all these hoops," she said.

It was then Katie and Philip found themselves contemplating whether the hurdles they faced were worth the finish line they sought.

"Yes, it's a sacrament, but is the sacrament the actual being married to each other or is it because it's conferred by a priest? And it was a conversation we had, and these are two people that have been raised in the church, work for the church, love our faith. But because it was so difficult, we were questioning it," Katie said.

The couple married July 12, 2014, at St. Mary, but, ironically, ended up registering at Sacred Heart. "Just because it is our home parish, and we needed to," Katie said, though she added that the conversation about becoming parishioners never occurred when they first approached the parish about their wedding.

To Katie, marriage shouldn't be a legalistic sacrament, but rather an opportunity for evangelization.

"It should be an opportunity to welcome people, find out what they need. And it doesn't have to always be a piece of paper, a list that needs to be checked off. It's what do you need and where can we bring Jesus to you?" she said.

Karmen and Eduardo Mayorga had been married around two years when they decided in 2013 to have their union blessed in the Catholic church. By then, the couple had an established life together: They shared a home and Karmen had become a mother to Eduardo's three children.

When they approached their parish priest at Our Lady of Mount Carmel Parish in El Paso, Texas, he informed them that Eduardo, who was baptized in the Catholic church but raised in the Jehovah's Witness faith, must first receive the sacraments of Communion and confirmation. While friends thought the blessing could come first, the El Paso diocese told Karmen that marriage preparation requirements differed from parish to parish.

Work conflicts led the Mayorgas to explore taking sacramental classes at other parishes. In the process, the response of some parish staff and priests was more administrative than congratulatory. It felt to Karmen more "like getting your driver's license" than prepping for a sacrament.

During the sacramental classes, which Eduardo began in fall 2013, the couple at times felt judged because they married first outside the church, that they were living in sin.

"But my husband and I were strong enough in our love and respect for each other that we managed to see past that and focus on God instead of what people ... were telling us," she said.

By the time of Eduardo's confirmation and first Communion on Holy Saturday 2014, the Mayorgas felt exhausted from the sacramental classes, with six months of marriage preparation classes still ahead of them.

"We kind of wanted a little bit of a break," Karmen said.

Shortly after, she began corresponding with her former pastor, Conventual Franciscan Fr. John Stowe, about their situation. Stowe had left the El Paso diocese, where he had held several chancery positions, in 2010 for Ohio. In March of this year, Pope Francis named him bishop of Lexington, Ky.

Hearing their predicament, Stowe told Karmen they should have been able to have their marriage blessed before Eduardo received his sacraments, and agreed to do the blessing himself when he returned to El Paso in October. In the meantime, he requested from the priest at Our Lady of Mount Carmel an exception for the Mayorgas from the typical marriage prep courses and retreat in place of a scaled-down version. When Karmen asked if he was certain they could skip them, she recalled Stowe saying, "Karmen, I know who you are. I've met your husband, I know who you are, you've formed a family together, you took in three children that are not yours and you see them as your own."

On Oct. 29, 2014 -- the sixth anniversary of when the couple began dating -- Stowe blessed Karmen and Eduardo's marriage before four friends in a ceremony at Our Lady of Mount Carmel, also known as the Ysleta Mission, Texas' first permanent mission.

Looking back on the journey to that moment, she said that greater cohesiveness among parishes, so that each offers the same answers, would have simplified things. In addition, she wished parish staffs were warmer in greeting the desire to include the church in a precious life moment, and would recognize that couples can take different paths to the altar.

"You can open the doors to them and say, 'Hey, would you like to have your marriage blessed?' instead of 'Oh, you're living in sin, we can't do anything for you. You have to do this, this and this,' " she said.

Kasper presses for full return of those in second marriages