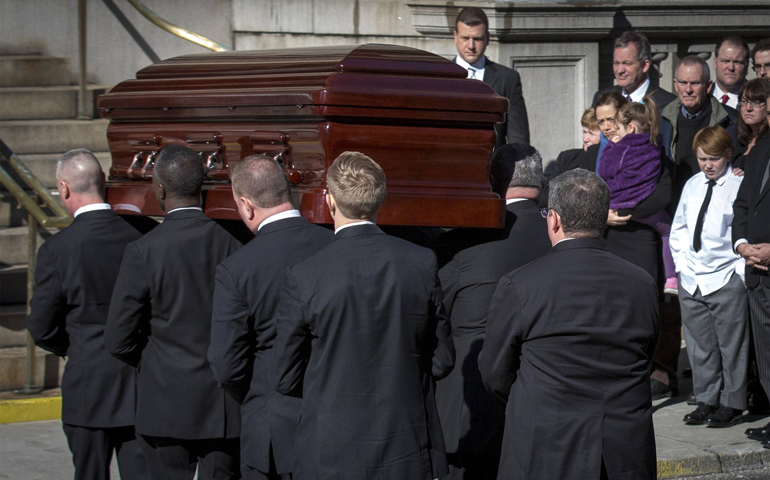 Talented. Troubled. Tragic. An alliteration of adjectives that could be used to describe Philip Seymour Hoffman's life, addiction and demise.

Before, during and after, the media exploded with reports that acknowledged Hoffman's acting skills yet criticized his choices and the decision to have a Catholic funeral for him. Even the news analysis program "The McLaughlin Group" spent more than 10 minutes of a 30-minute show on Hoffman and the morality regarding his choice to use heroin.

According to Deacon David Lopez, chancellor for the diocese of Sioux City, the Catholic church and Scripture are careful to distinguish between right use and abuse of drugs.

"Right use is good and acceptable, while abuse, obviously, is wrong," he told The Catholic Globe, the diocesan newspaper. "So if a person were using heroin medicinally, as in a hospice situation, and merely happened to die, that wouldn't be seen as immoral, whereas in the same situation, if someone deliberately used an overdose in order to cause a death, that would be immoral."

He continued: "If a person is abusing heroin, or any drug or alcohol, that's a wrong act. But not every wrong act is a sin; only wrong acts done with sufficient degree of knowledge and intent are sins. One is culpable, or deserving of blame, for one's actions when the action is objectively wrong and done with a sufficient degree of knowledge and intent. Unintentional actions can be wrong, but one might not be blamed for them."

Leslie Goodrich, an addictions counselor with Catholic Charities of the diocese of Sioux City, agreed with that assessment.

Lopez attributed the dichotomy of the many accolades for Hoffman the actor with an equal level of negative judgments of Hoffman the heroin addict to today's culture.

"We tend both to recognize that drug abuse is wrong, yet to idolize our heroes," he said. "The combination of the two means that we will either excuse our heroes as some sort of victim or denigrate them for disappointing our ideals."

"There is still a stigma with heroin use," Goodrich said. "There is a hierarchy with drug use. The pot smoker is perceived as not so bad, but a heroin addict has always been at the bottom of the barrel, with use associated with bums on New York City streets.

"Hoffman certainly was successful as an actor, but he may not have felt worthy of success," she said. "Addicts use to cope with good times and bad times. Actors have big egos and have some demons that go along with success. I can't make a judgment why he went back to it, but that's addiction."

Hoffman left three children without a father, and some pronounced his choice to use heroin a selfish one. Lopez perceived that as objectively true, but also said, "Not everyone will understand subjectively the consequences of their behavior, particularly under the influence of something like an addiction. If there's room for argument, it's here -- in a person's understanding of their own actions."

Goodrich, who has worked in addiction counseling for more than 20 years, felt a "selfish" declaration was a fair bit of reasoning.

"For an addict, it is all about 'me.' When you are in your addiction, you are the center of your universe," she said.

Lopez explained the church's rules about who is eligible for a funeral in light of Hoffman fathering children out of wedlock and admitting his addictions.

"Merely being a sinner, even a publicly known one, doesn't mean a baptized Catholic can be refused a Catholic funeral," he said.

"If someone dies from a disease because they did not take their medications, would they not be worthy of a Catholic funeral?" Goodrich asked. "Addiction is a medical disorder, specifically, a mental health disorder, but also physiological in that it changes the brain's chemistry and the individual becomes dependent. I ask myself when I hear this reasoning (about not allowing a Catholic funeral), 'What would Jesus do?' or 'What would Pope Francis say?' "

Jesuit Fr. James Martin, an author and editor at large of the Jesuit national magazine America, who met the late actor while consulting for an off-Broadway play, celebrated the funeral Mass. In an interview, he emphasized Hoffman was a baptized Catholic, a member of the body of Christ and deserving of a Catholic funeral.

"And Pope Francis reminds us that the sacraments aren't for perfect people; they are for the rest of us," Martin added.

[Joanne Fox is managing editor of The Catholic Globe, newspaper of the diocese of Sioux City.]