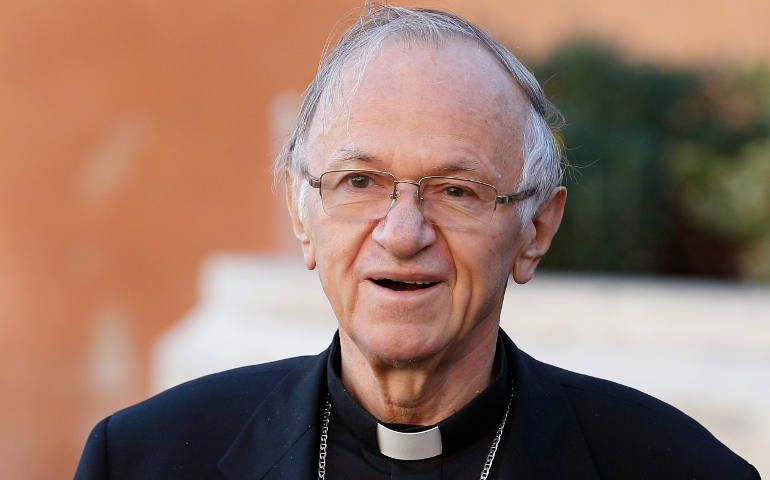 Polish Archbishop Zygmunt Zimowski, president of the Pontifical Council for Health Care Ministry, died in Poland July 13 at the age of 67. He is pictured arriving for a session of the Synod of Bishops on the family at the Vatican Oct. 12, 2015. (CNS/Paul Haring)

Polish Archbishop Zygmunt Zimowski, head of the Pontifical Council for Health Care Ministry, died Wednesday at the age of 67.

Having been ill for some time, the archbishop was convalescing in Poland, where he died; Pope Francis had telephoned him recently to express his support and prayers, Vatican Radio reported Wednesday.

The archbishop had received treatment for pancreatic cancer at the end of 2014 in Warsaw before returning back to work at the Vatican in 2015.

In a telegram offering his condolences, Francis praised the archbishop's "generous ministry" and the way he live a long, painful illness "with spirit of faith and Christian testimony."

Born in Kupienin, Poland, April 7, 1949, he was ordained a priest in 1973. He later earned a degree in dogmatic theology.

He worked at the Congregation for the Doctrine of the Faith from 1983 to 2002, when it was headed by Cardinal Joseph Ratzinger -- the future Pope Benedict XVI. Among the projects he worked on there was the Polish edition of the Catechism of the Catholic Church.

St. John Paul appointed him to head the Radom diocese in 2002, and it was Ratzinger who ordained him a bishop in a Mass in the cathedral of Radom.

As bishop of Radom, he held a number of important positions in the Polish bishops' conference. He was president of the bishops' doctrinal commission, a delegate for Polish emigrants, a member of the ecumenical commission and part of a group overseeing Radio Maryja.

In 2009, Pope Benedict appointed him president of the Pontifical Council for Health Care Ministry -- an office that promotes activities to help church agencies and individuals who serve the sick and suffering. Its work often overlaps with doctrinal questions, especially regarding bioethics and life issues in medical treatment.

Under his tenure, the council helped organize a number of international conferences dealing with current concerns such as care for people with autism spectrum disorders; the relationship between human health and care for the planet; care for the elderly afflicted with Alzheimer's and other neurodegenerative diseases; and the importance of St. John Paul's teachings on the culture of life.

A look back on Dupuis' skirmish with the Vatican