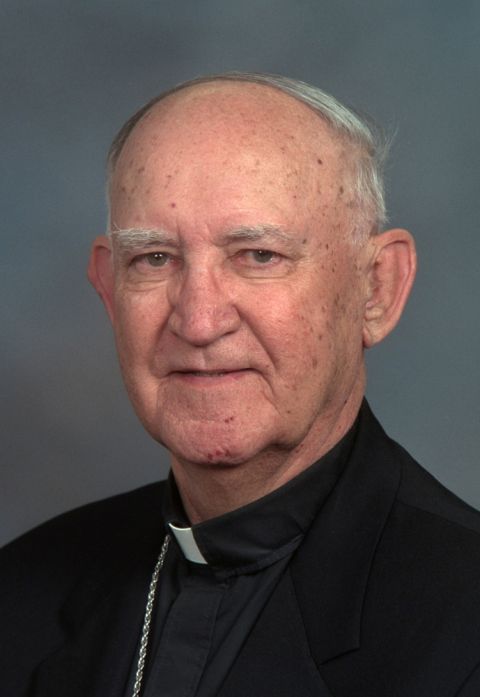 Retired Bishop Charles Grahmann of Dallas died Aug. 14 at age 87 at St. Luke Baptist Hospital in San Antonio during surgery to insert a stent in his heart. Grahmann was the sixth bishop of the Diocese of Dallas, serving from 1990 to 2006. He is pictured in an undated photo. (CNS/courtesy The Texas Catholic)

As bishop of Dallas, he built parishes and schools and embraced the burgeoning Catholic Hispanic growth in the Southwest, but his tenure from 1990 until his retirement in 2007 was marred by a clergy abuse scandal whose emotional and financial aftermath also divided the diocese.

A visitation and vigil were scheduled for Aug. 17 at Santa Clara of Assisi Catholic Church, with the funeral Mass to follow at the church Aug. 18. Other services also were scheduled in the Archdiocese of San Antonio and the Diocese of Victoria.

The announcement of Grahmann's death was made in Dallas the evening of Aug. 14 when Dallas Bishop Edward Burns addressed a news conference to discuss a grand jury report in Pennsylvania that detailed thousands of cases of sexual abuse by 300 clergy in six dioceses over a seven-decade period.

Grahmann was installed as the sixth bishop of the Diocese of Dallas in 1990 after a long pastoral career in the Diocese of Victoria and the Archdiocese of San Antonio. He submitted his resignation in 2006 when he turned 75 and was replaced a year later by Bishop Kevin Farrell, then an auxiliary bishop of the Archdiocese of Washington and now a cardinal who is prefect of the Dicastery for the Laity, the Family and Life at the Vatican.

Burns said that Grahmann had celebrated Mass the morning of Aug. 14 at Casa de Padres, a retirement home for clergy in San Antonio where he had been living for several years, and also received the sacrament of the anointing of the sick. Grahmann died later in the afternoon during surgery to insert a stent in his heart.

"Bishop Grahmann was a man of deep faith," Burns said. "During his tenure (in Dallas) he, too, shepherded this church during difficult days."

Charles V. Grahmann was born to Nicholas and Annie Grahmann July 15, 1931, in Hallettsville, a second- generation Texan whose German ancestors had settled in Lavaca County. Life for him and his 10 siblings centered on working the soil and were embedded in Catholic Church activities.

He entered St. John's Seminary in San Antonio in the eighth grade in 1945 and was ordained a priest March 17, 1956, at San Fernando Cathedral in San Antonio.

He had numerous assignments in the San Antonio Archdiocese, several in predominately Hispanic parishes, and also moved into archdiocesan administrative duties. He spent a short time as a dean of men at St. Mary's Seminary, served for a time as the diocesan director of Catholic Relief Services, and was instrumental in founding grass-roots organizations that helped empower a growing, but impoverished Mexican-American community in San Antonio.

For the visit of Pope John Paul to San Antonio in September 1987, his brother bishops gave him the responsibility for raising and managing the millions of dollars in funds for the papal visit.

In 1989, he was named coadjutor to Dallas Bishop Thomas Tschoepe and succeeded him July 15, 1990, the 100th anniversary of the establishment of the Diocese of Dallas by Pope Leo XIII.

In Dallas, Grahmann found a nine-county diocese with a Catholic population of 226,000, but one that was increasing due to migration from across the country and, particularly, from south of the border. Recognizing that a large part of the burgeoning Catholic population was due to immigration of Hispanic Catholics, Grahmann made the outreach to Hispanics a priority of his episcopacy.

During his tenure, 14 parishes were established and several schools to accommodate the growing number of Catholics moving to North Texas from across the country and other parts of the world.

But there is no erasing a dark shadow cast across the diocese during Grahmann's tenure, one brought on by a sexual abuse scandal that pitted Catholics against Catholics; a jury verdict that cost the diocese millions of dollars; another jury verdict that brought life sentences for a pedophile priest; outcries and fallouts from the re-assignments of several priests; and what Catholic community and business leaders said was a diocese divided because Grahmann did not resign, even when a coadjutor for the Dallas diocese was named.

In July 1997, a Dallas County jury found the diocese liable for failing to act on years' of warnings about Fr. Rudy Kos, accused of sexual misconduct with 11 altar boys, and for fraud and conspiracy to hide the priest's crimes from parishioners and police. The diocese later reached an agreement with the victims for approximately $35.6 million, with the diocese paying approximately $11.6 million, with the insurance carriers paying the remainder.

In 1998, Kos was convicted of aggravated sexual assault of former altar boys and was sentenced to life in prison.

After the settlement, Grahmann apologized to the victims and their families and said "the decisions made concerning Rudy Kos were errors in human judgment. We accept the burden of the verdict."

Grahmann later wrote of the events: "It was a painful and agonizing time for the victims and their families, for the church and for me personally. I have a deep sorrow in my heart that will never go away."

In 2002, the U.S. bishops convened a conference in Dallas and adopted safeguards for the protection of children in Catholic schools and parishes.

In 2006, Grahmann turned 75 and submitted his resignation to Pope Benedict XVI and was replaced the following year by Farrell, a native of Dublin, Ireland.

The Dallas Diocese is now home to more than 1 million Catholics.

In retirement, Grahmann spent time in Dallas and at his home in Hallettsville and assisted with confirmations in Dallas and San Antonio. In 2012, when his health began to deteriorate, he moved to Casa de Padres, the retirement home for priests and brothers in San Antonio.

He was preceded in death by his parents and three sisters, Rita Zaruba, and Sr. Anastasia and Sr. Sylvia, both of whom were Sisters of the Incarnate Word and Blessed Sacrament.

He is survived by five brothers, Nicholas Jr., Marcus, Jerome, Fred and Lasallian Br. Nicholas, and two sisters, Anita Spangle and Mary Ann Michalke. He has 25 nephews and nieces, grandnephews and nieces and two great-grand nephews.

Your thoughts on the U.S. bishops' conference assembly