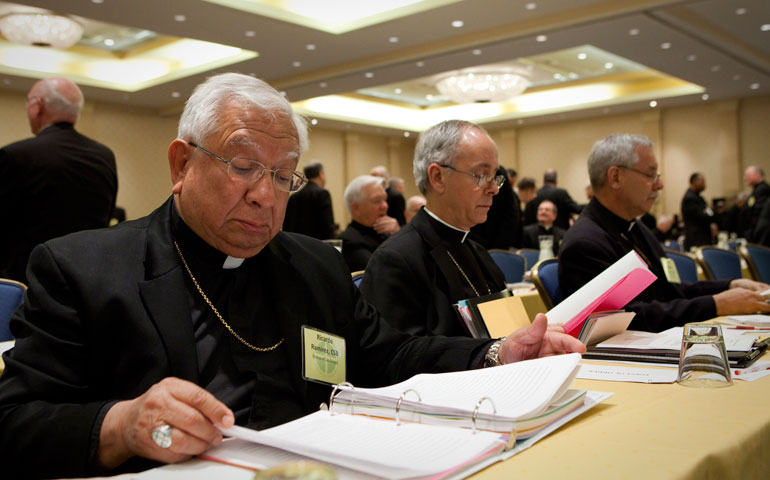 Bishops look over documents at the opening session of their annual fall meeting in Baltimore Nov. 12. (CNS/Nancy Phelan Wiechec)

Among the actions emerging from the U.S. bishops' annual fall assembly here, one that was least likely to garner any big headlines was their decision to add a new assistant director to the staff of the National Religious Retirement Office.

But behind it is one of the more dramatic human issues facing the U.S. church in coming years: a growing crisis in the many billions of dollars in unfunded retirement and elderly care costs that religious orders of men and women, especially women, are facing within the next couple of decades.

Nearly two-thirds of U.S. men and women religious today are age 70 or older, and 86 percent are 60 or older, said the report behind the proposal to expand staffing of the office. The office not only allocates funds from the yearly national collection for retired religious, but also provides extensive consultation services to help religious congregations prepare better for the funding crisis for aging members that so many of them face.

Other major actions the U.S. Conference of Catholic Bishops took during the two days of public business sessions of their Nov. 12-15 meeting in Baltimore include:

The underfunded retirement and elderly care liabilities of U.S. religious orders and congregations are an urgent issue, the bishops were told. According to the most recent study conducted, only 7,692 U.S. men and women religious -- 14 percent -- are under the age of 60. It said 48,811 are 60 or older, and 34,631 of those are 70 or older.

The stark data in the report were only the latest alert to a problem that was already described as a pending crisis in the early 1970s, when members of Catholic religious institutes were first allowed to enter the Social Security system if their orders or congregations made back Social Security contributions to fulfill the system's minimum requirements to be eligible for benefits.

Since then, as actuarial and financial data accumulated, the dimensions of the crisis became ever more evident -- unfunded retirement/elderly care liabilities among religious, especially women religious who for decades had worked for a pittance in the nation's Catholic schools and other institutions, grew into billions of dollars.

The yearly national collection for retired religious, started in 1988, has made some dents in addressing the issue, collecting more that $30 million a year in recent years -- but that amount has not even begun to deal with the $20 billion in estimated religious retirement/old age liabilities that religious orders in this country are expected to face by 2023.

Roughly three out of every eight U.S. religious institutes today "have 40 percent or less of the amount they are projected to need for retirement costs," the report to the bishops said.

It said the additional staff member on the National Religious Retirement Office is urgently needed to help more religious institutes prepare for a future of growing retirement and elderly care costs with significantly reduced income as fewer and fewer members are able to earn regular salaries.

[Jerry Filteau, NCR Washington correspondent, has reported on financial religious retirement issues in the United States since the early 1970s. His email address is jfilteau@ncronline.org.]

A version of this story appeared in the Nov 23-Dec 6, 2012 print issue under the headline: Bishops face the growing retirement crisis of religious orders.