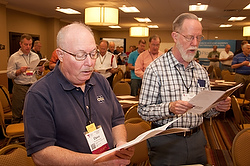 Frs. Dave Holloway of the diocese of Kansas City-St. Joseph, Mo., and Ted Olson of the diocese of Orange, Calif., participate in morning prayers April 25 during the National Federation of Priests' Councils convention in Nashville, Tenn. (CNS/Tennessee Register/Theresa Laurence)

To varying degrees, U.S. priests continue to harbor discontent with church leaders and at times feel like they are walking on "eggshells" as a result of the clergy sex abuse crisis, reports a recently released study.

Carried out by the Center for Applied Research in the Apostolate, "Same Call, Different Men: The Evolution of the Priesthood since Vatican II" also says the scandal:

Based at Georgetown University, the CARA researchers used a sample of 2,400 diocesan and 800 religious priests. It employed surveys, focus groups and individual interviews.

Two chapters -- a little more than a fourth of the book-form study -- focus on the sex abuse issue. Both chapters are largely based on interviews and anecdotes.

Chapter 6, "Effects of the Sexual Abuse Scandal," includes a lengthy narrative that traces the abuse story's roots back at least four decades. Among other things, it describes efforts made in the 1990s to encourage more attention to the issue by U.S. bishops.

In June 1992, the bishops "responded by establishing an Ad Hoc Committee on Sexual Abuse and by publicly endorsing a set of guidelines for dioceses responding to allegations of abuse by priests," the study states, adding: "The guidelines did not constitute a formal policy or set of regulations."

The researchers later write: "Revelations of 2002 -- especially that many known abusers remained in parish ministry -- made it easy to doubt that all dioceses took the ... recommendations seriously."

The study text gives voice to priestly anger on several aspects of the bishops' and religious communities' handling of the scandal and the implementation of the "Charter for the Protection of Children and Young People" and the "Essential Norms for Diocesan/Eparchial Policies Dealing With Allegations of Sexual Abuse of Minors by Priests or Deacons."

The Charter and Norms were adopted in June 2002 at a landmark bishops' meeting in Dallas.

Examples of priests' quotes from the CARA study:

One priest told researchers his bishop had remained unsupportive of priests who had been cleared of any wrong-doing.

According to the study, for many priests, "the greatest source of resentment about the Charter is zero tolerance, particularly the zealousness with which some bishops have moved to laicize nearly all priests in their dioceses who are guilty of abuse."

The study authors emphasized that no men they interviewed suggested returning priests guilty of sexual abuse to ministry. However, many expressed frustration at how harshly some accused priests were treated.

"It might appear easy to dismiss such complaints as reflecting greater concern for perpetrators than victims of the scandal," the researchers wrote, "but a surprisingly high number of men we spoke with say they personally know an accused priest whom they believe to be innocent."

"Zero tolerance is irrational," one priest participant said. "The bishops should have stated the principles very clearly and said: The first thing is always going to be to protect
victims. ... Secondly, we're not going to abide any priest in the priesthood who's a danger to children. The permanence of the priesthood means nothing in comparison to protecting children for the future. But we're not going to treat the guy who was in an alcoholic stupor and was homosexual and had an event with a 17-year-old -- I don't condone any of these things -- the same as somebody who has abused 20 people and who clearly has a sickness and is an ongoing danger. ... To make believe there is no difference, that's all done for publicity. Zero tolerance: that means the guy who made a mistake but really doesn't have a sickness, now he's gone forever."

While priests noted a need to support one another, the study poses the question, "Is there a dark side to priestly fraternity?"

The authors observe, "Some have argued that there was an unwritten code of silence in the priesthood over the years that allowed the scandal to fester -- one that extended beyond Church leaders and led ordinary priests to overlook or minimize the crimes of their brothers . We cannot adequately answer this question ourselves."

The study did, however, quote two priests on the topic of "collective responsibility for the scandal."

A "member of the millennial cohort," which the scholars defined as a priest ordained in 1992 or later, said, "I would agree that that could be possible. Some guys that had been in the culture for a long time may have contributed in the sense that there were pastors who knew that a guy was doing this, but they didn't know how to deal with it. All they wanted to do was be rid of the problem from their little corner of the woods. I don't think anybody at that time would have felt like they had any power to change the situation -- that it was up to the diocese and the leadership to actually do something about these things. As long as the guy was moved out of their parish, they felt like it was being dealt with. I think that's why the anger goes to the leadership so much because they were the ones trusted to actually deal with it."

An older priest provided a different perspective: "There are priests who aren't particularly friends of mine, but I would get up at four o'clock in the morning to go help them out -- and maybe in less than morally high situations. 'You've got your ass in a sling and I'll come bail you out. But by God the next morning we're both going to talk to the bishop.' ... I think there is a brotherhood of priests. I'm not sure if it was a cover-up brotherhood. I would hate to think that it was. I think it should be a challenging brotherhood."

Despite the deep impact of the sex abuse scandal in the Catholic community, "... with a few exceptions -- particularly priests in parishes where abuse previously took place -- most pastors told us that they have received a great deal of affirmation and support from their parishioners and have not found themselves the targets of hostility," the study states.

"This attitude is consistent with findings from surveys conducted at the height of the scandal; most pastors remained in high esteem among their own parishioners," it added.

Predictably, the study found the most severe backlash experienced by priests occurred in parishes where abuse had taken place or in dioceses wracked with multiple cases of abuse and cover-up.

"Few priests told us they have experienced naked hostility on the street, but many feel considerably more wary since 2002," the researchers said. "A common example of a time when priests say they feel this way is while visiting patients in a hospital."

The study was commissioned by the National Federation of Priests' Counsels and funded anonymously. One of the study's three authors, Mary Gautier, spoke about findings in the book at the recent NFPC national convention in Nashville, Tenn. Her focus was on the changing demographics of priesthood in the United States, according to a Catholic News Service story.

When asked their thoughts on the underlying causes of sex abuse by clergy, "priests almost never raised the issue of celibacy," the study reports.

When interviewers posed questions about a potential connection between celibacy and sex abuse, "the most common reaction was skepticism."

A priest with counseling experience questioned on the topic by the researchers said, "There are certain individuals for whom, because they only relate to children in an inappropriate way, their flight to celibacy was obviously unhealthy. For the majority of individuals with this problem, however, it is not an issue of celibacy. That is pretty clear in the research. Eighty percent of offenders in the United States are white heterosexual married males."

From New York to El Salvador, prayers for peace at Mass for St. Romero

Pontifical group says Christians are 'lazy' in face of persecution