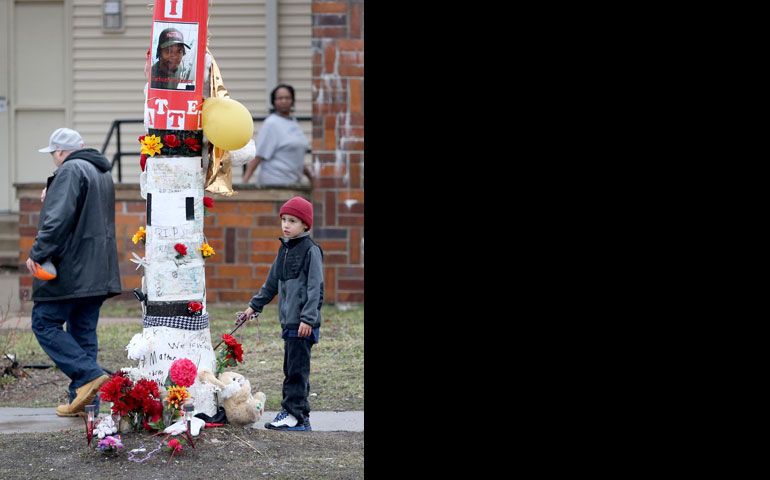 People walk by a memorial to Jamar Clark March 30 in Minneapolis, where Clark was shot by police in November 2015. (Newscom/ZUMA Press/The Star Tribune/David Joles)

These were just some of the phrases screamed with venom by passers-by at the 25 Catholic Workers who were linking arms to block the major intersection outside Target Field in Minneapolis during the Minnesota Twins' opening game.

Under the leadership of Black Lives Matter Minneapolis and Black Liberation Project, our mostly white group helped communicate two demands: first, that Target end its exploitative labor conditions for its mostly black and brown workers; and second, that the case of the killing of Jamar Clark, an unarmed young man who was shot in the head by Minneapolis police last November, be reopened, and an independent prosecutor assigned.

About 70 protesters attended the April 11 event, unfurling banners both inside and outside the stadium that brought attention to the recent decision of prosecutor Mike Freeman to not indict the officers who shot Clark.

While the frequently shouted refrain of "Get a job!" sounded absurd coming from baseball fans on their way to a Monday afternoon game, the phrase "I agree with you, just not your tactics" hit closer to home.

I myself had struggled to see how interference with traffic during a sporting event could possibly lead to the justice we were calling for. How could provoking the anger of Minneapolis residents be considered a productive or nonviolent approach?

With the in-depth training we received that weekend by Lena Gardner and Kandace Montgomery, two leaders in Black Lives Matter Minneapolis, I understood that the purpose of these direct actions was to create such a tension in our society that the demands of Black Lives Matter could no longer be ignored.

During the training, somebody specifically asked our guides about the strategy behind their disruptive tactics. They answered that as long as black women, children and men were getting killed in the streets with impunity, activists would disturb "business as usual" in order to force the wider community to take notice and enforce change.

Their reply reflects the sentiment of Dr. Martin Luther King Jr. in his "Letter From a Birmingham Jail," responding to the criticism of white religious leaders who, too, agreed with his goals, but not his tactics.

"Nonviolent direct action seeks to create such a crisis and establish such creative tension that a community that has consistently refused to negotiate is forced to confront the issue," he wrote. "It seeks so to dramatize the issue that it can no longer be ignored."

As people shouted "Shame!" at us during the protest, another of King's quotes came to mind: "You deplore the demonstrations that are presently taking place. ... But I am sorry that [you] did not express a similar concern for the conditions that brought the demonstrations into being."

One of the many specific conditions in Minneapolis that have brought such demonstrations of outrage into being is the fact that, over the past 10 years, 100 percent of people killed by the Minneapolis Police Department have been black or brown.

How is it that many white Midwesterners would rather hurl insults at demonstrators who cause them a minor inconvenience than scream at the top of their lungs for justice when their sisters and brothers of color are being killed one after another?

Catholic Workers have a long and strong tradition of nonviolent civil disobedience, though its actions have traditionally been targeted at war-making. For the past 13 years, Catholic Workers in the Midwest have been meeting every spring for a "Faith and Resistance Retreat" in one community's hometown to support its local nonviolent campaign. Gatherings have focused on such issues as nuclear weapons, ROTC, drone warfare and mercenary soldiers.

Last year, however, prompted in large part by the shooting of Michael Brown in Ferguson, Mo., the movement began to challenge itself to look at the way we have been not only ignoring the war on black people in our own cities, but even perpetuating racism within our predominantly white communities. About 100 Catholic Workers attended a training in St. Louis led by Crossroads, an anti-racism organization.

The conversations in St. Louis were often messy and at times quite tense, as confronting our own racism is difficult. Still, the training helped us see how much we have suffered from racism: dividing us from our neighbors, and letting fear prevent us from making deep and lasting relationships with people of color.

It also helped clarify how the cost of being "white" in this country has meant a disconnection from our communities of origin -- our ancestors, land, culture and even spiritual roots. This separation has led to insidious forms of alienation and ever-increasing rates of anxiety among white people. We are realizing our own need for deep healing from this 500-year-old legacy.

This year, the Midwest Catholic Worker decided to combine an anti-racism training with a direct action of civil disobedience, both led and facilitated by Black Lives Matter.

The weekend included a discussion of the history of Catholic Worker support (and non-support) of racial justice, highlighting Dr. Arthur Falls, a black physician who founded the first Catholic Worker in Chicago in 1936. We discussed the idea of "followership" -- what it means for a white person to trust and defer to the leadership of people of color in movements for racial justice.

Gardner and Montgomery provided us with an in-depth history of Black Lives Matter Minneapolis, an overview of the often unacknowledged black liberation movements on this continent, and a clearer picture of the way black people are targeted by police in their city.

Our facilitators also unpacked the main principle that guides Black Lives Matter: that all black lives -- regardless of age, sex or gender -- matter. Because of this overarching belief, Black Lives Matter has made a specific effort to centralize the voices of the most marginalized among them, namely LGBT women.

Gardner and Montgomery invited their colleague the Rev. Osagyefo Sekou, a black pastor and theologian who participated in the nonviolent protests in Ferguson, to prepare us for what we might face during our protest. Based on his own experience, Sekou taught us how to protect ourselves if the police used tear gas, mace, clubs, or "snatch and grab" maneuvers on us.

It was decided that only white people, who are less vulnerable to police brutality or abuse in jail, would risk arrest during this action. (We were correct -- after blocking an intersection and a light rail for 90 minutes, all 25 of us would be gently processed and released in less than two hours.)

During the preparation, Sekou pointed out that white communities often bemoan the fact that they can't get more people of color to join their organizations. He believed that this was missing the point. "I don't have any problem with all-white communities," he said. "As long as you are doing everything you can within those communities to dismantle white supremacy."

When we stepped out into the road on that sunny afternoon, we did so for two reasons. First, as Amy Van Steenwyk of the Mennonite Worker so eloquently expressed, we believed it was "our moral obligation to call our white brothers and sisters into deeper compassion and a fuller understanding of the complexities and pervasiveness of American anti-black racism."

Perhaps even more importantly, we did so because we believed that only through actively dismantling the white supremacy we have inherited from our ancestors will we find the joy, liberation and connection that comes through true community.

Salvadoran president: Oscar Romero's beatification is a miracle for the country

Your thoughts on Benedict's letter on sex abuse