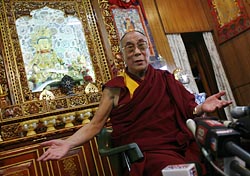 The Dalai Lama gestures as he speaks to the media at his residence in Dharamsala, India, in 2008. (CNS photo/Arko Datta, Reuters)

WEST CONSHOHOCKEN, Pa. -- The Dalai Lama was named Thursday as the winner of the 2012 Templeton Prize.

A statement from the John Templeton Foundation, which selects the winner, said his "long-standing engagement with multiple dimensions of science and with people far beyond his own religious traditions has made him an incomparable global voice for universal ethics."

The prize, which includes an award of about $1.7 million -- the monetary award must always be larger than those offered in the Nobel Prizes -- will be presented to the Dalai Lama in London May 14.

"With an increasing reliance on technological advances to solve the world's problems, humanity also seeks the reassurance that only a spiritual quest can answer," said a March 29 statement by John M. Templeton Jr., foundation president and chairman. "The Dalai Lama offers a universal voice of compassion underpinned by a love and respect for spiritually relevant scientific research that centers on every single human being."

"When I heard today your decision to give me this quite famous award, I really felt this is another sign of recognition about my little service to humanity, mainly nonviolence and unity around different religious traditions," said the Dalai Lama in an acceptance video posted Thursday on the foundation's website.

Born Tenzin Gyatso on July 6, 1935, in a farming village in Qinghai province of western China, he was elevated to the status of 14th Dalai Lama at age 2. At age 6, he began his monastic education. In 1950, at age 15, he was officially installed as the political leader of Tibet, a post he relinquished only last year. The involvement of the Chinese government in Tibet soon prompted his departure from Tibet.

Throughout the 1950s, he tried to enter into a peace accord with China. But in 1959, at age 23, in response to increasing tensions from an uprising within the region against Chinese control, he fled to India, eventually settling in Dharamsala, India, which remains his home in exile.

In 1989, the Dalai Lama was awarded the Nobel Peace Prize for his advocacy of nonviolence as the path to liberation for Tibet.

The Chinese government has long waged a war of words against the Dalai Lama, and treated Tibetan Buddhists harshly in their homeland. On March 24, The Associated Press reported that China Tibet Online, a state-run Chinese website, launched an attack on the Dalai Lama, accusing him of Nazi racial policies and inciting Tibetans to set themselves on fire.

Each year, a nine-member panel chooses a living person who has made exceptional contributions to affirming life's spiritual dimension to receive the Templeton Prize.

Ebola, war or disaster: how and when global service groups decide to flee