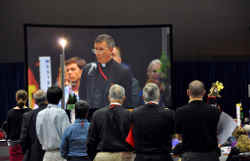 Deputies to the Episcopal General Convention watch a screen as the Very Rev. David Thurlow of South Carolina addresses the convention in Indianapolis July 10. The convention approved a rite of blessing for same-sex unions, making the Episcopal Church th e largest U.S. denomination to do so. Rev. Thurlow spoke against adoption of the blessing, saying it was a departure from the church's teaching on marriage. (CNS photo/Mary Frances Schjonberg, courtesy of Episc

INDIANAPOLIS -- In a decision that could strain relations with the Catholic Church and within its own Anglican Communion, the Episcopal Church has approved liturgical resources for the blessing of same-sex relationships.

But Bishop Edward Little of Northern Indiana said during the debate that approval would "put the Episcopal Church out of the Christian mainstream."

"The Christian world is going to understand us as having changed the nature of the sacrament of holy matrimony," he said. "The Christian world will ... see vows, and exchange of rings, a pronouncement and a blessing and they will understand that to mean the Episcopal Church has endorsed same-sex marriage and changed a basic Christian doctrine. I do not believe that we are free to do that."

The Episcopal Church is a member of the Anglican Communion, which has opposed the blessing of same-sex unions and the ordination of openly gay bishops.

Oblate Father John W. Crossin, executive director of the U.S. bishops' Secretariat for Ecumenical and Interreligious Affairs, declined an interview request about the move, saying, "We don't comment on the internal workings of other churches."

Both houses of the General Convention also voted to approve a resolution titled "Extending the rights of the laity" that forbids discrimination against members of the transgendered community.

The resolution added gender expression and identity to the categories in which discrimination is banned. Church policy will now make clear that the ordination discernment process is open to transgendered people and that they have an equal place in the life, worship and governance of the church.

Meanwhile in Pittsburgh, the General Assembly of the Presbyterian Church (USA) voted July 7 to neither reaffirm nor reject the denomination's definition of marriage as "a civil contract between a man and a woman."

Accepting a suggestion of its Assembly Committee on Civil Union and Marriage Issues, the body called for two years of "serious study and discernment" about Christian marriage.

By a vote of 338-308, the assembly rejected the committee's recommendation that the Book of Order's definition of marriage be changed from a man and a woman to two people.

Following Francis in the dark hours