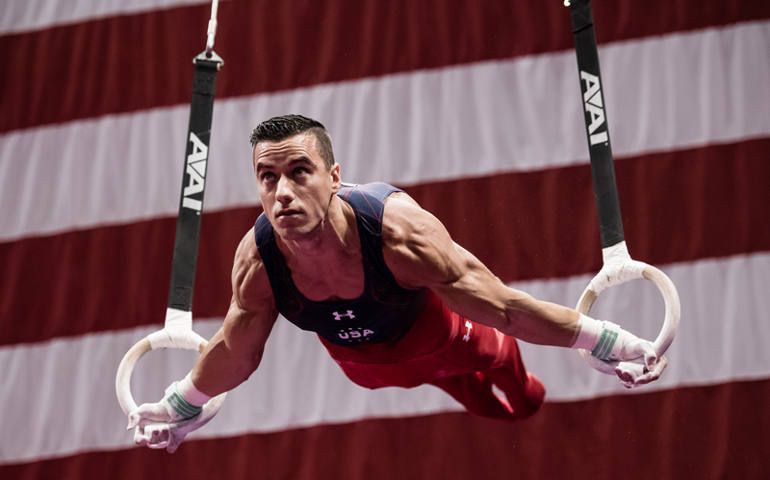 Jake Dalton on the still rings. (Photo by John Cheng)
This article appears in the Rio Olympics feature series. View the full series.

Olympic gymnast Jake Dalton isn’t one of those athletes who point heavenward after every successful vault through the air.

But the 24-year-old bears other outward signs of his Christian faith, including two tattoos: a pair of praying hands on his right side and the words of a New Testament verse on the other.

He had his left side etched with Philippians 4:13 -- “I can do all things through Christ who strengthens me” -- months before traveling to the Olympic trials in 2012.

Dalton has since become a four-time world medalist and has won more than a dozen national medals. He is set to compete on Saturday in the gymnastics competition in Rio.

“It was kind of my last little thing to remind myself to do everything that I could to be ready for that team and try to get on that team, and whatever happens it was God’s plan to happen, whether I made the team or not,” he said of the Bible verse tattoo.

Dalton, a fitness advocate, also wears a favorite necklace in the shape of a kettle bell with the words of Psalm 28:7: “The Lord is my strength.”

The Reno, Nev., native grew up playing different sports but was mainly focused on baseball. But he thinks divine intervention led him to focus on the floor routines.

“My baseball coach told me to do gymnastics because it would help with my pitching arm,” he said.

Since the London Olympics, Dalton had a physical setback. He had to undergo surgery last year for a shoulder injury.

“My biggest question and fear was, ‘Was I able to get back fast enough to get ready for the Olympic Games?’” he recalled.

Dalton said his faith -- especially daily prayer -- has helped him overcome his fears about competing.

“A lot of it is scary so I actually do pray throughout most of my workout,” he said.

That spiritual practice calms him down but also energizes him.

“If I’m a little nervous to do something, it kind of allows me to put my trust in my faith and allows me to get through workout a little bit better,” he said.

Given his active schedule, Dalton isn’t able to get to church very often. But he said he and his wife, Kayla, sometimes attend JourneyChurch, an Evangelical Covenant congregation in Norman, Okla., or watch the live-stream of its worship services.

As he prepares to flip through the air and seek the perfect landing, Dalton said he will continue to try to focus on faith rather than fear.

“Usually you’re afraid to get hurt, so my thought process is, if that’s God’s plan that I’m going to get injured, there’s going to be a reason for it and it’s going to make me stronger,” he said. “I’m ready to go and just put my faith that God’s going to carry me through and keep me safe.”