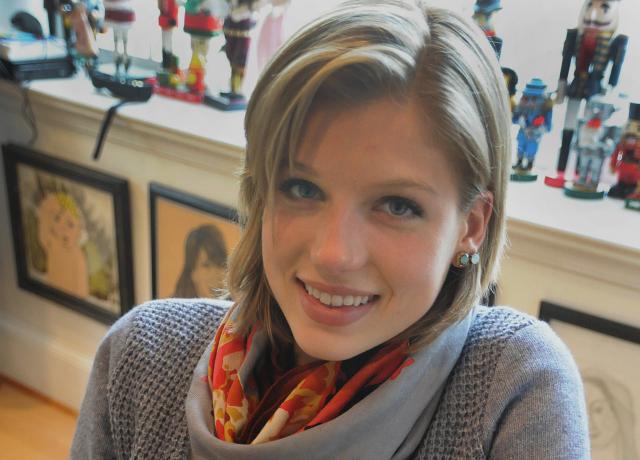 HERNDON, Va. -- Keenan Kampa will make history this summer as the first American to join the prestigious Mariinsky Ballet Company based in St. Petersburg, Russia.

Being offered a position with Mariinsky, also known as the Kirov Ballet, is "such an absolute honor," Kampa said. "Even thinking about it, I get chills sometimes."

The 23-year-old dancer, a native of Northern Virginia, is no stranger to St. Petersburg, having studied at the Vaganova Ballet Academy from 2007 to 2010. For the last year and a half, Kampa has danced with the Boston Ballet, and she will complete her two-year contract with that company before heading to Russia.

Although Kampa knows dancing with the Mariinsky Ballet will be extremely rigorous, she said she's ready for it.

"I don't care how hard it is," she told the Arlington Catholic Herald, newspaper of the Arlington Diocese, during an interview at her parents' home in Herndon. "It's what I've been given right now in my life, and I'm just so thrilled and up to the challenge."

One reason Kampa can be so confident -- besides her own natural talent and a life built on discipline -- is her complete faith in God.

A lifelong Catholic, Kampa attended St. Joseph School in Herndon, a suburb of Washington, and also was home-schooled growing up. Her parents, she said, offered their four daughters an example of moral integrity and instilled in them the importance of a good conscience.

But it wasn't until she headed to St. Petersburg in August 2007 -- at only 17 -- that she had to take responsibility for her faith life.

"There comes a point where all of a sudden it was in my hands completely," Kampa said. "And that's when you really grow in your faith, I think, when it's up to you to make that decision."

At Vaganova, Kampa said, "every aspect (of school) was difficult."

"You're living by yourself. The school is so unbelievably rigorous and difficult and demanding. And you're constantly being scrutinized and watched ... because you're a new face, you're a foreigner and you're American," she said.

So, as she had been taught all her life, she turned to God. In the quiet of the mornings, she began a prayer routine consisting of a morning offering, a litany and novena to St. Philomena while stretching, and Hail Marys while "doing splits."

"It was really peaceful," she said. "It was the way I really recharged my batteries and put things in perspective."

For a young dancer in a stressful environment, this prayer time became invaluable, Kampa said. It helped her listen to and learn from criticism without becoming crushed by it. It helped her recognize and maintain her life's priorities -- that it was OK to take ballet very seriously as long as she remembered that dancing was not her sole purpose in life.

"You can fall easily in that rut -- so easily," she said. "Your whole reason for living is not to be a professional dancer. To have something really great happen with ballet is exciting, but it's good to keep it in perspective."

Rather, she said, her goals are to grow closer to God, to be a "good Christian example" to those around her and, of course, "to get to heaven."

The past two years have been another lesson in faith for Kampa. When she learned before graduating in 2010 that she wasn't likely to be offered a position in the Mariinsky Ballet -- partly because of visa difficulties -- she was devastated. She neglected her faith for a while and, by her own admission, "was not a fun person to be around."

But "the second I started picking it back up I got happier and started accepting what was going on," she said. Those experiences, she realized, are how one learns and grows.

Then, last summer, when visiting friends in St. Petersburg and rehearsing for an upcoming event with her partner, she was unexpectedly offered a position with the company.

Her "yes" was immediate, and her excitement is palpable.

Although she's enjoyed her time in Boston and the United States, Kampa said she's looking forward to getting back to Russia -- and, in a way, to God.

"I really miss that quiet time," she said. "There's so many distractions here, and I feel that life in general is so fast here. It'll be almost like a retreat to have that time again."

Professionally, too, she said she will continue to try to be a good example, to work hard and be honest in all she does -- living her faith in her daily, demanding life.

"I'm hoping they see that I'm going there to do a good job and to get the best experience I can."

Marie Collins: History will judge Francis 'on his actions, not his intentions'

Mexican cardinal urges priests to promote vocations among US Hispanics