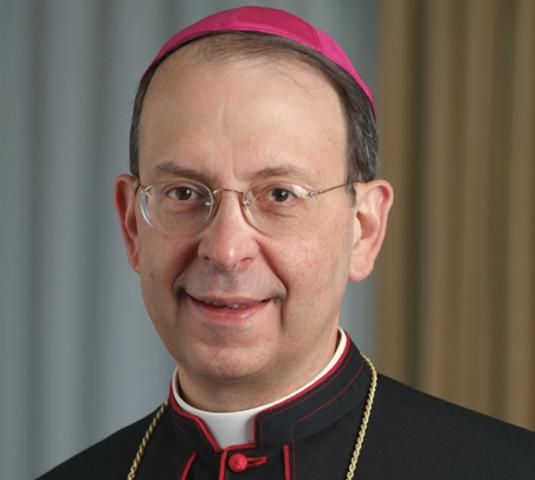 WASHINGTON -- Pope Benedict XVI has appointed Bishop William E. Lori of Bridgeport, Conn., to be the new archbishop of Baltimore, and he also named new bishops for the dioceses of Rockford, Ill., and Pensacola-Tallahassee, Fla.

The appointments and the resignation of 76-year-old Bishop Thomas G. Doran of Rockford were announced Tuesday in Washington by Archbishop Carlo Maria Vigano, apostolic nuncio to the United States.

Monsignor David J. Malloy, 56, who was general secretary of the U.S. Conference of Catholic Bishops from 2006 to 2011, has been named bishop of Rockford. He is currently pastor of St. Francis de Sales Church in Lake Geneva, Wis.

Fr. Gregory L. Parkes, vicar general of the Diocese of Orlando, Fla., and pastor of Corpus Christi Parish in Celebration, Fla., was named bishop of Pensacola-Tallahassee. He will turn 48 April 2.

Lori, 60, has been the bishop of Bridgeport since March 2001. He is chairman of the U.S. bishops' Ad Hoc Committee on Religious Liberty.

Cardinal Edwin F. O'Brien, named grand master of the Equestrian Order of the Holy Sepulcher of Jerusalem Aug. 29, will remain as apostolic administrator of the Baltimore Archdiocese until Lori's installation May 16.

"This archdiocese has been blessed with many outstanding leaders through the years, and our Holy Father has continued this tradition with the naming of Bishop Lori as the 16th archbishop of the premier see," O'Brien said. "I look forward to watching as his God-given talents and gentle nature bear much fruit for the glory of God and the benefit of his people in this holy church of Baltimore."

He was ordained a priest for the Archdiocese of Washington May 14, 1977, by Cardinal William W. Baum and earned a doctorate in sacred theology from The Catholic University of America in 1982. After serving in a parish, he was named secretary to Archbishop [later Cardinal] James A. Hickey of Washington, as well as chancellor of the archdiocese, moderator of the curia and vicar general.

Named an auxiliary bishop of the Washington Archdiocese Feb. 28, 1995, he was ordained to the episcopacy by Blessed John Paul II April 20 of that year. He was appointed bishop of Bridgeport Jan. 23, 2001, and installed March 19.

"In the coming days and in the years ahead, I look forward to working with the priests of the archdiocese, visiting our parishes, schools and charities, and working closely with the laity, religious and deacons -- indeed all whose witness to Christ and whose spirit of loving service enable this historic archdiocese to proclaim the Gospel afresh in our times and bring its truths and values into the public square," Lori said in a statement.

Bishop-designate Malloy, new head of the Rockford Diocese, has held national and international service positions in the Catholic Church.

Born Feb. 3, 1956, in Milwaukee, David John Malloy graduated with a bachelor's degree in biology from Marquette University and then studied for the priesthood at St. Francis de Sales Seminary in Milwaukee and the Pontifical North American College in Rome, where he earned advanced degrees in theology.

He was ordained a priest of the Milwaukee Archdiocese by Archbishop Rembert G. Weakland in 1983.

After ordination, Malloy served for two years as associate pastor of St. John Nepomuk Parish in Racine, Wis., before returning to Rome to study for the Vatican diplomatic corps. He earned a licentiate in canon law from Rome's Pontifical University of St. Thomas Aquinas, known as the Angelicum, and a doctorate in theology from Gregorian University.

His diplomatic assignments included serving at Vatican embassies in Pakistan, Syria and the United Nations, as well as assisting in the Prefecture of the Papal Household at the Vatican, 1998-2001. He speaks English, Italian, Spanish and some French.

Appointed an associate general secretary of the USCCB in 2001, he became general secretary in 2006, serving a five-year term. Upon his return to the Milwaukee Archdiocese he was named administrator and later pastor of St. Francis de Sales Parish in Lake Geneva.

Parkes, a canon lawyer who worked in the banking industry before becoming a priest, is the first priest of the Diocese of Orlando to be named a bishop. His brother, Fr. Stephen Parkes, is also a priest of the Orlando Diocese.

Expressing thanks for "the confidence placed in me" by Pope Benedict, he said, "I have always trusted in God's will and trusted God will give me the strength to do God's will."

Archbishop Thomas G. Wenski of Miami, who has served as apostolic administrator of the Pensacola-Tallahassee Diocese since the retirement of Bishop John H. Ricard for health reasons in March 2011, described the new bishop as "a good priest and a holy man."

Bishop John G. Noonan of Orlando said that while he felt joy for Parkes, he was also at a loss because he was losing a trusted adviser.

"He's a good, solid priest, and a wise and prudent man," Noonan said. "His spirit is bigger than his size. He is a gentle giant," Noonan said of the priest who stands 6 feet, 8 inches tall.

Parkes said the diversity of his experiences as a priest -- both on a diocesan and parish level -- should help him serve the faithful of the Pensacola-Tallahassee Diocese. After his ordination in 1999, Parkes served for four years as parochial vicar of Holy Family Parish in Orlando before being named founding pastor of Corpus Christi Parish in 2005.

"The joy of my priesthood has always been parish ministry," he said. "I always felt that is the basis and foundation of my call to be a parish priest, in spite of having responsibilities in the diocese and trying to fulfill them the best I could. Where I get my joy is serving in the parish."

Born April 2, 1964, in Mineola, N.Y., he came to Florida to attend Florida State University in Tallahassee, where he graduated with a bachelor's degree in finance in 1987. He studied for the priesthood at St. Vincent de Paul Seminary in Boynton Beach, Fla., and North American College in Rome, earning a bachelor's degree in theology and a licentiate in canon law from Gregorian University. He was ordained a priest June 26, 1999.

Along with completing his priestly responsibilities in the Orlando Diocese, Parkes is working with clergy and laity of the Pensacola-Tallahassee Diocese to complete primary episcopal plans -- from the ordination Mass to the completion of his episcopal crest and motto."

Even things such as being fitted for new vestments is on his to-do list.

"When you are 6' 8", you always bring your own vestments," he joked. "It's not like I can buy anything off the rack."

Healing the world through words

Study finds US Latinos are no longer majority-Catholic. Here are some reasons why