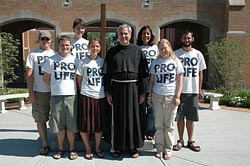 WASHINGTON -- They crossed 2,000 miles of mountains and prairie, sun and sleet, city and country to spread the Catholic church's pro-life message.

"They" were mostly college-age volunteers who walked from coast to coast in four separate groups, protesting at abortion clinics along the way, before arriving in Washington for a rally Saturday.

The walk was challenging at times, volunteers Matt Rochefort and Stephanie Culy told Catholic News Service in an interview a day before the rally.

Rochefort's group braved wildlife, including a bear sighting at night. Meanwhile, Culy's group trekked up the Cascade Mountains to cross Washington state, but they remained dedicated to their mission.

"We were climbing 1,600 feet in five miles, and it was windy and raining," said Culy, but any adversity they faced was worth it to take a stand against "the culture of death."

"This is the kind of culture we're working against. I thought of Christ walking to Golgotha. That image really stuck to me," she said.

"Not many people engaged us -- most people didn't know what pro-life is. I think a lot of the problem is the ignorance of abortion," said Rochefort. "But we don't use graphic pictures or signs. We try to be a peaceful presence."

"We were very enthusiastic after the first mile in Santa Monica, and this teenager, his name was Gabe and I will never forget, walks up to this group of us in pro-life shirts and begins to argue with us. It was just so amazing; he really cared about the women. I think it took a lot of courage for Gabe. We prayed for him for the rest of the walk, and I really believe he'll turn around" and see that abortion is wrong, Rochefort said.

There were 41 walkers separated into four groups, one group for each departure city. Each group was split into a night team and day team to ensure Crossroads was making constant progress eastward.

Within each team, walkers were further separated into smaller groups that walked five-mile intervals. Each smaller group would walk its mileage, then, like a relay, the next smaller group would cover five miles and so on. When they weren't walking, the participants stayed in an RV that traveled with each group.

The Crossroads volunteers did more than just work to stop abortion.

"There is always the right person you could talk to. In Cedar Point, Ohio, someone asked us about euthanasia," Culy told CNS, explaining that this person was concerned about the suffering of a woman she knew "who had died a slow and painful death. ... We told her the graces that suffering brought back."

When the groups of walkers finally gathered for the rally at a fountain beside the Capitol, there was a bittersweet feeling among them.

For three months they had lived together, prayed together, and even suffered together after one of their own, Andrew Moore, was struck and killed by a vehicle outside of Indianapolis.

Moore was honored by the guest speakers at the rally. Franciscan Father Daniel Pattee prayed for Moore specifically in his opening prayer, while remaining optimistic for Crossroads. America is a pro-life country, the youth of America are turning, and things are changing for the better, said the priest, who is the head of the theology department at Franciscan University in Steubenville, Ohio.

Also invited to speak were Lila Rose from Live Action and Bryan Kempler from Priests for Life.

Kempler told the crowd, "I believe with all my heart, this is the generation that will abolish abortion. Every one of you born after January 22, 1973, survived Roe v. Wade. Don't let Roe v. Wade survive you."

Cardinal George out of hospital, receiving antibiotics for infection