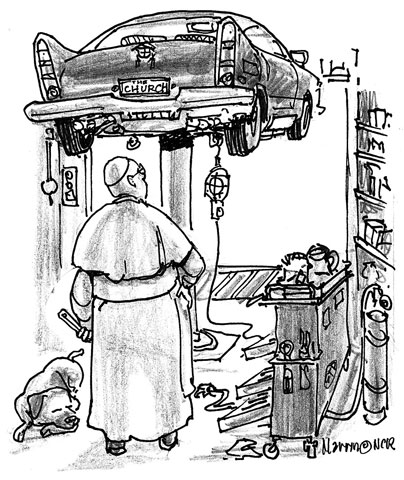 Should we come back? Now that it's a pope named Francis who is being hailed as "a history-making pontiff," "a man who knows how to govern" and a leader from "outside the walls of Rome," is it a moment for those of us who were Catholic-raised and Catholic-educated to rejoin the church after having taken a powder years ago?

It was a strong tailwind of reasons that helped blow us out the door: revulsion at the child abuse scandals, the hierarchy's shielding of pedophile priests, the cruelty of church policy on gays and lesbians, the Vatican's clamping down on American nuns, the attacks on priests who support women's ordination, a calcified Eurocentric Roman bureaucracy that rules by fiat and not consensus. Then, too, a final turn-off: doctrinal rigidity. Rome has spoken; that's it, people. No discussion allowed.

What's to be learned soon enough about Pope Francis is whether he will be a tinkerer or an overhauler. The former is one who hauls his car to the local gas station and explains to the mechanic that the brakes are worn, the tires are flat, the radiator is not holding water, the oil leaks, the lower control arms are broken, the steering wheel can't turn, the headlights are out, the carburetor is shot, the doors won't lock and the wipers don't wipe. The car owner tells the mechanic to just squirt a bit of Havoline Supreme on the engine and the old girl will run fine.

The overhauler has different instructions: Put the heap atop the jack, take it apart, replace the parts, realign the wheels, flush the engine, put in six quarts of oil and give me a loaner car because this won't be an overnight job.

Pope John XXIII was an overhauler. The Second Vatican Council he created in the early 1960s was as unexpected as it was daring and inspirational. Reforms were put into place, ones that made Catholicism relevant to the faith-based lives of its members who took seriously the demands of the Gospels. Will Francis and his inner circle call for the Third Vatican Council? If so, it needs to happen soon. If it doesn't come within a year and all we see is useless tinkering, then what is there to bring back those of us who hightailed?

On what should the convening hierarchy focus during a new council?

Go to confession collectively, for a sacramental start. Confess to the sin of harassing the American nuns, a group of women who without their unsung and free labor in hospitals, schools and service in the outposts of compassion, the church couldn't function. Confess to the sin of stonewalling the appeals of the pedophile victims. Confess to the sin of expelling Fr. Roy Bourgeois from the priesthood and invite him back to the fold. Confess to the sin of demeaning gays and lesbians, with Francis himself apologizing for saying as recently as 2010 that same-sex marriage is "a war against God" and "a maneuver by the devil."

A Third Vatican Council, with the laity having equal status with the hierarchy, could become the collagen that keeps together the essentials of the faith while allowing the nonessentials -- priestly celibacy, male-only clergy, no contraception -- to be relegated to history as was the Latin Mass, meatless Fridays and no altar girls. With a pope named Francis, it could be a moment for the church to collectively clear its head by embracing the pacifism of St. Francis of Assisi and finally do away with blessing just wars. It could be a moment for Pope Francis to embrace the saint's love of animals by calling for an end to the daily horrors of factory farming and instructing Catholics to respect the rights of animals by becoming vegans.

Taking the name of Francis and honoring the saint's commitment to nonviolence to humans and animals would mean that Catholicism would be a true peace church. Do that and I'll be back. Pronto.

A version of this story appeared in the April 12-25, 2013 print issue under the headline: What will it take to get me back?.